In the 1970s, an American beverage revolution had begun in Northern California and the Pacific North-West. A desire by three friends to source and sell better quality coffee resulted in the first Starbucks Coffee shop in Seattle in 1971. Five years later, at a blind tasting now known as the Judgement of Paris, wine from Napa Valley all scored better than a selection of similar French wine. This event shocked the wine world and shattered the myth that only France was capable of making fine wine. There were also two relatively minor events in Northern California that would go on to shape the very concept of American Craft Beer in profound ways. Anchor Brewing, a historic San Francisco brewery was rescued from bankruptcy and by 1975 were brewing and bottling uncommon styles of beer. These included a revived style known as steam beer as well as barley wines, porters, and even a Christmas Ale. Then in the final year of the seventies, two homebrewers from the Sacramento Valley area established Sierra Nevada Brewing. They may not have been the first to use Oregan grown hops to brew intensely aromatic ales, but they were the first to bottle this style and bring it to a wider audience. As craft beer spread across the United States, the final frontier was Florida. Not only was it the furthest away from where the brewing revolution began, but the hot, humid climate contributed to the belief that only light lagers could be successful locally.

Finally, in 1995 Florida got Dunedin Brewery, the first craft beer company in the state, named for the small Gulf Coast town where it was based. Joey Redner, a Tampa native who worked in distribution for Dunedin beer and also operated an English-style pub, would look at the rise of microbreweries in the region and wonder why none of them were bottling their beer. He started writing an opinion piece about this for the Tampa Bay Times, but quickly realized that he was putting together a feasible business plan for his own beer company. From this simple idea, the Cigar City Brewing Company was created.

The name of the brewery comes from a nickname that Tampa got in the late 1800s when cigar rolling was the city’s largest industry. Even the names of some core beers are influenced by tobacco culture. Maduro Brown Ale, the first product made by the company, is named for a style of earthy, rich cigar that the beer is inspired by. Others pay homage to Latin American culture in Florida. Jai Alai IPA is named for a fast-paced ball game from the Basque region that developed a following in Florida. Head brewer Wayne Wambles said that his “whole concept for that beer was to make an IPA as tropical” as possible. What he achieved was an India Pale Ale with notes of orange blossom and ripe pineapple rather than the grapefruit zest and resinous pine typically associated with that style. This has become their flagship product and one of the top selling India Pale Ales in America. 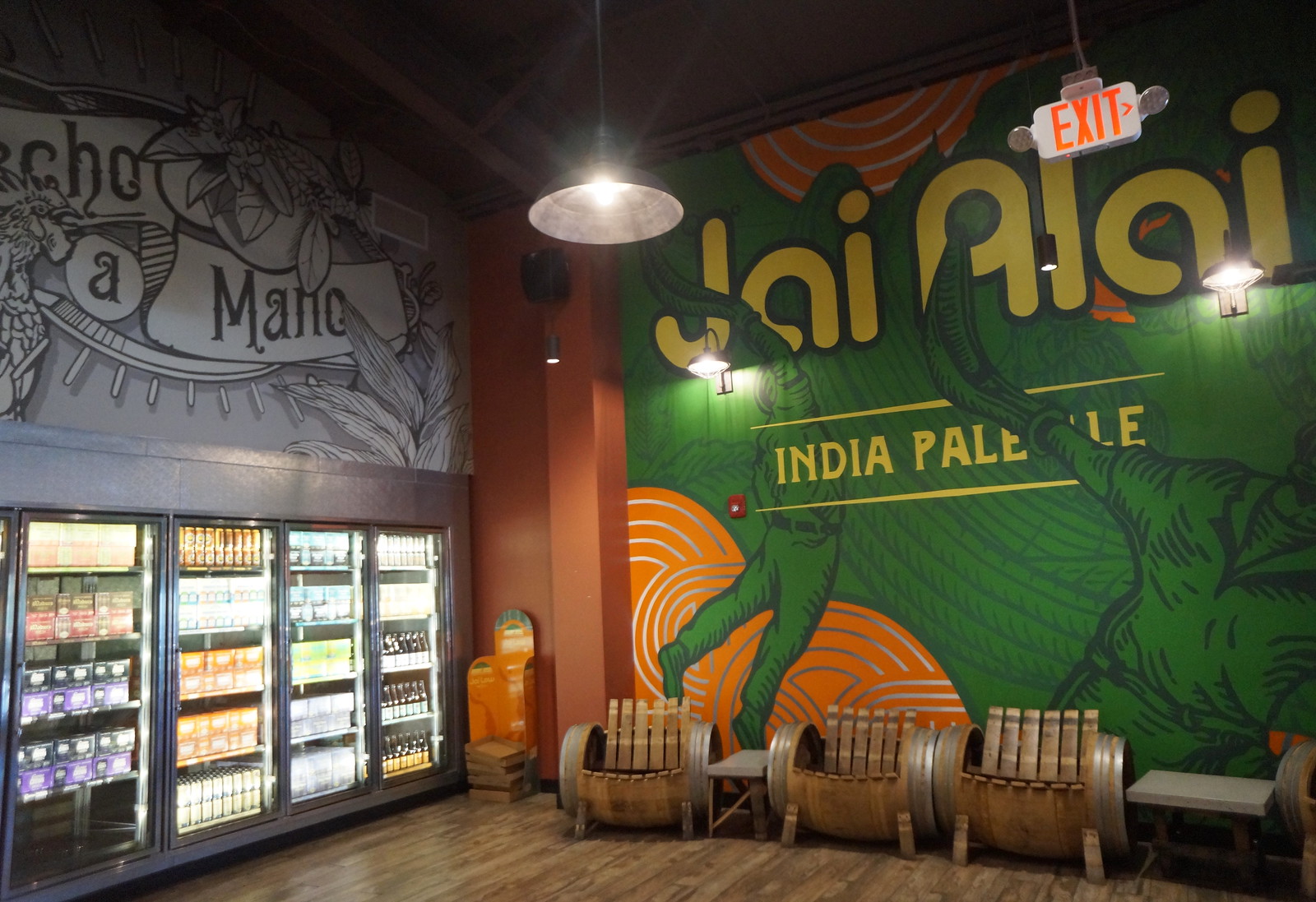 Different varieties of Jai Alai IPA were quickly conceived. The first of them saw the beer aged with Spanish Cedar, the variety of wood typically used to make cigar humidors. Another was made by mellowing the beer on spirals of white oak, the hardwood used for bourbon and rum barrels. Both woods lend to the beer a dry and spicy character. Other Jai Alai IPA varieties use extra hops, tangerines, and pineapples to accent the notes already present in the beer. 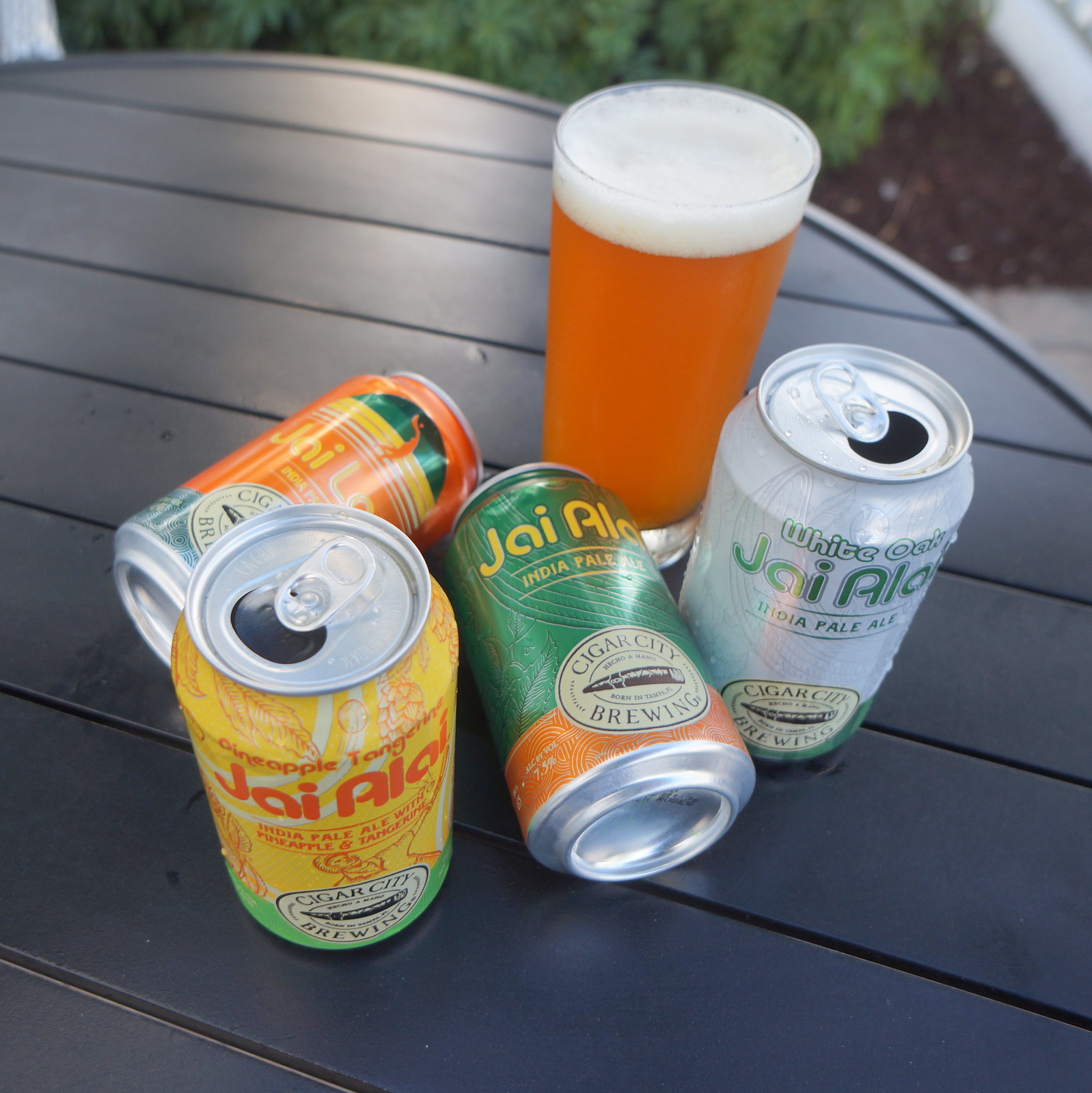 Similar but more intense is Florida Man, their double IPA named for the news headline phenomenon where a bizarre action would be attributed to a man from Florida. This has lead to the internet joke that a random man in Florida dubbed “the world’s worst superhero” is credited with committing crazy crimes all across the state. A blend of hops including Citra and Mandarina Bavarian alongside some Canadian honey malt is used to create an ale that starts with notes of tart tangerines and peaches followed by caramelized orange peels and light spiciness. 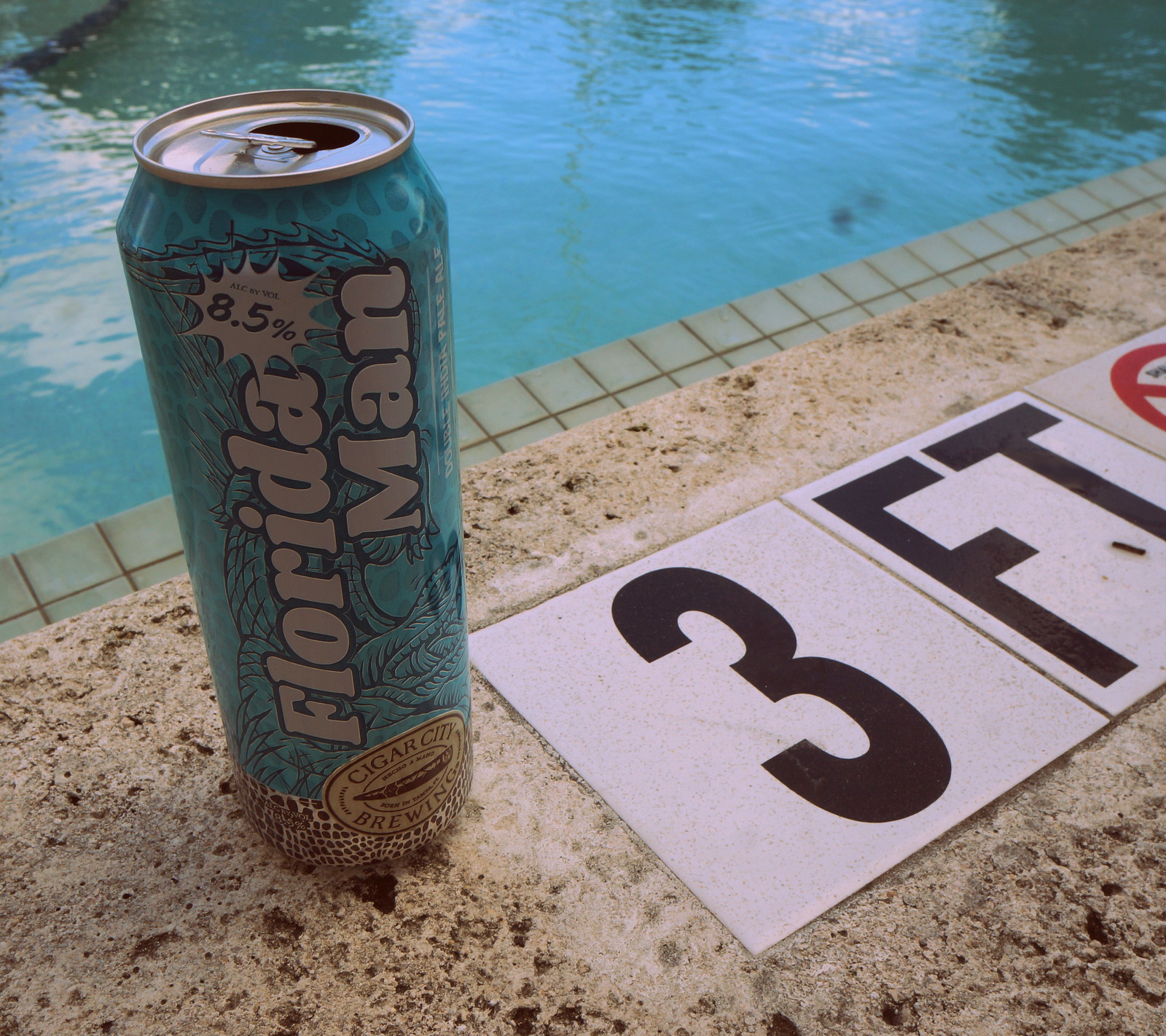 Florida Man IPA by the Pool

From the variations of Jai Alai IPA, and Florida Man alone, it is easy to see why Cigar City Brewing is often cited as an innovator of the hazy and juicy India Pale Ales that are increasingly becoming popular among modern drinkers. Several beers in this style are on tap at their brewery and taproom on Spruce Street. They’re all fruit forward, full-bodied with fresh hop notes that are prominent but not dominating. A few miles away, Coppertail Brewing serves several iterations of Florida Weisse each with their own unique character; The Cigar City taproom is like this but for India Pale Ales. 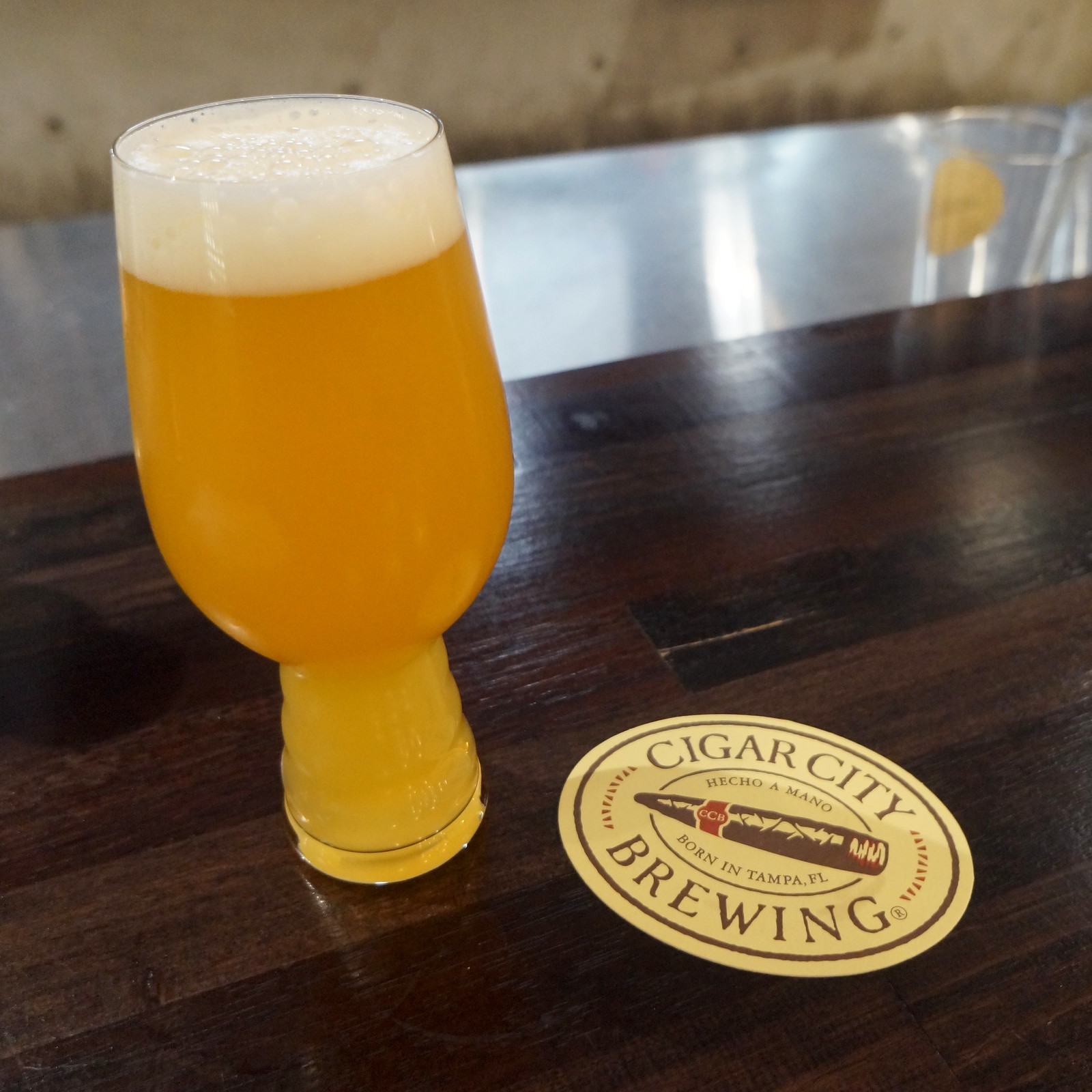 One of many Hazy IPAs on Tap

Beyond IPAs, they also produce a wide variety of beers with minimal hop character, and these range from easy-going and approachable, to rich and intense. Tampa-Style Lager is similar to Spanglish Latin Lager from Veza Sur Brewing Company in Wynwood; dry, and crisp with a slight sweetness. The quintessential Florida beer for the beach. Frost Proof, brewed with unmalted wheat, orange peel, and coriander is their take on a Belgian witbier, a style of beer that has seen growing popularity with American drinkers over the last decade. Another copper-colored beer from Cigar City inspired by brewing traditions in Belgium is Cosmic Crown. This time the inspiration comes from the Belgian Golden Strong Ales that are typically associated with Trappist Breweries. The beer is named for the generous use of Galaxy hops that brings with it their signature notes of guava and passionfruit. On this beer, there are prominent notes of fermented passion fruit followed by boiled plantains, lavender and honey. 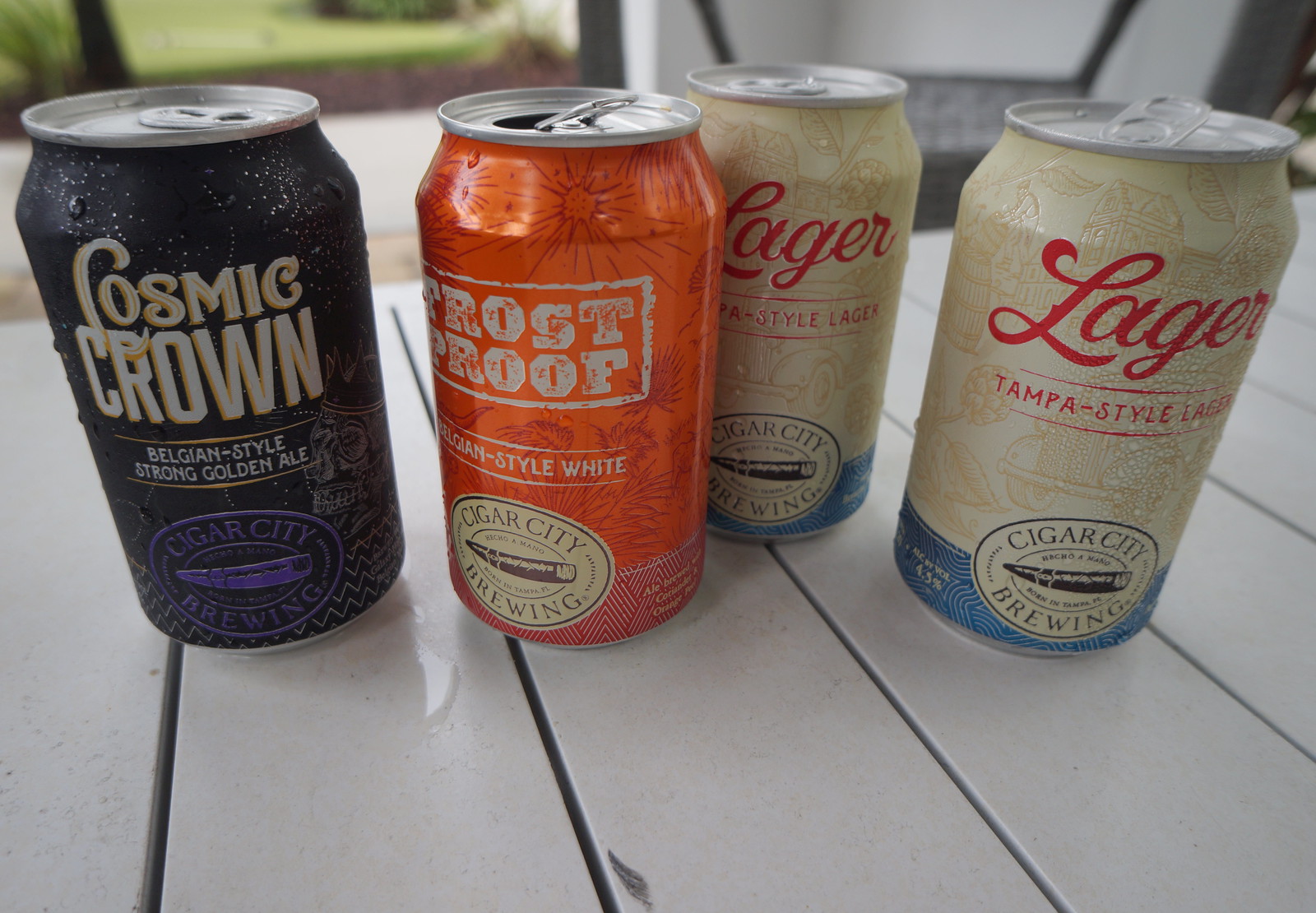 Several of their seasonal beers also have a strong following. Good Gourd is an Imperial Pumpkin Ale brewed for autumn that is often cited as the perfect example for what this style should strive to be; sweet and creamy with a well balanced spice blend. They use Ceylon cinnamon, Jamaica allspice and Zanzibar cloves and nutmeg, but on the nose there is also some faint cumin and ginger in addition to those spices. In the past, they have released a version aged in Bourbon barrels and at the brewery it’s served on nitro with Cuban style espresso. 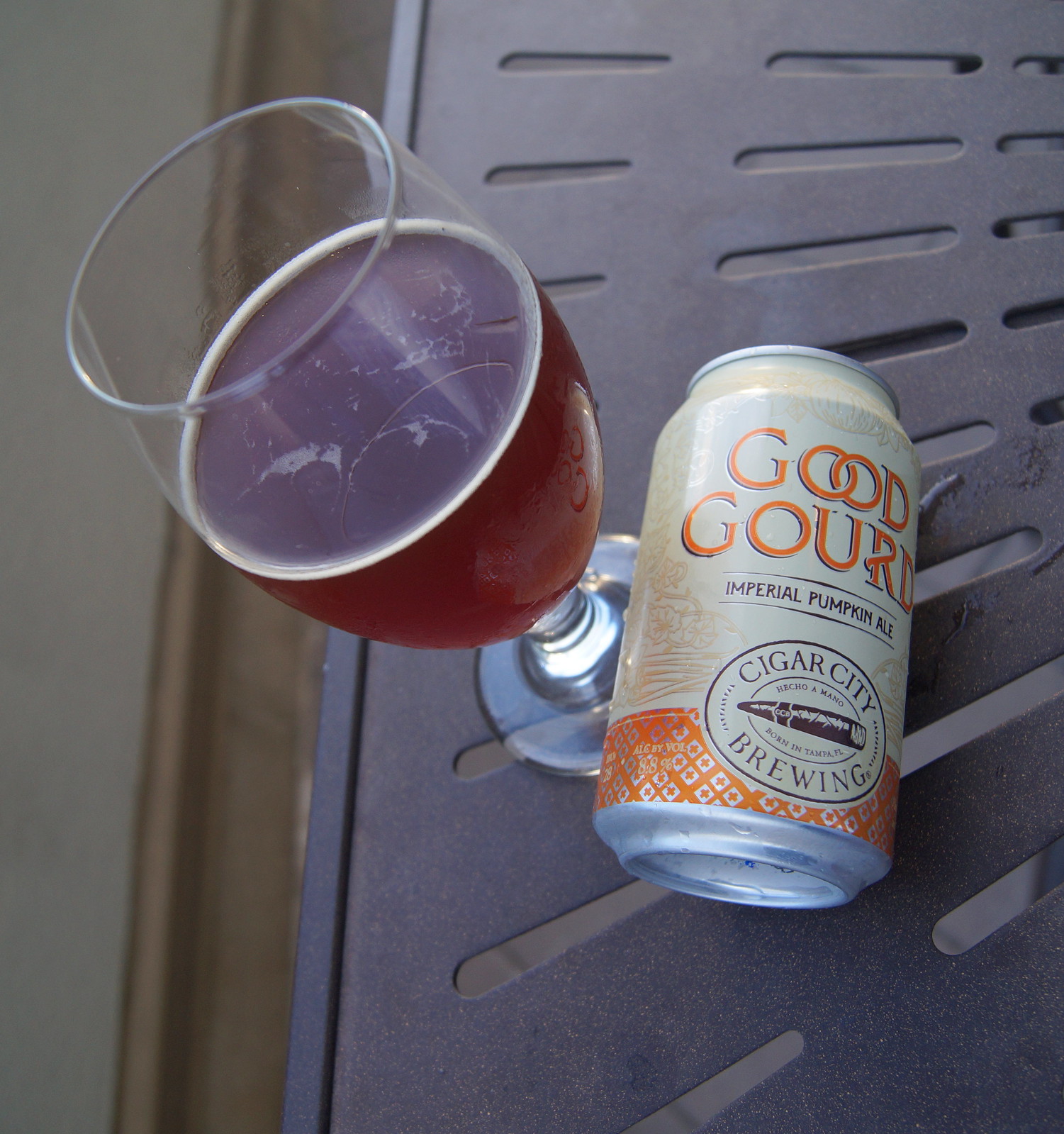 Possibly their most well known seasonal beer is Hunahpu’s Imperial Stout, a strong stout brewed with cinnamon, cacao nibs, and vanilla as well as ancho, pasilla, and guajillo chile peppers. The release of this beer has become an eagerly anticipated part of the annual Tampa Beer Week, both for those who get a chance to buy bottles of this coveted stout and for others who just want to sample it on draft. The beer’s name refers to two figures who appear in Mesoamerican mythology. One of these figures is a maize and cacao god who was entombed in the underworld according to the Popol Vuh, a sacred Mayan text. Scholars see his entombment as symbolic of cocoa and corn being fermented in the dark to make a weak, spiced beer. In a sense, this beer is a tribute to the early inhabitants of Central America who once brewed a beer with similar ingredients centuries ago. 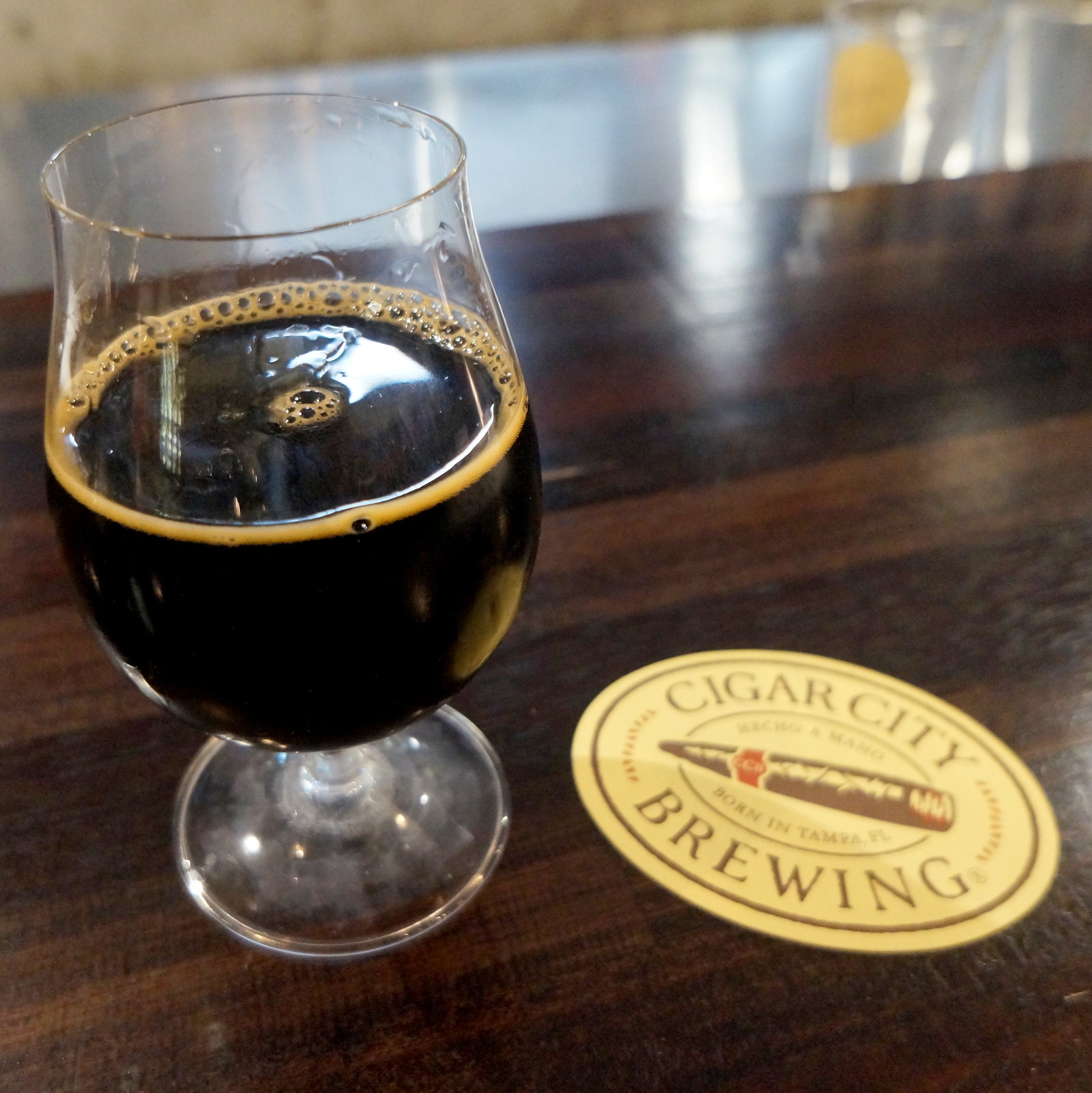 There have been barrel aged versions of Hunahpu’s Imperial Stout where the beer was allowed to mellow for a few months in Apple Brandy or Caribbean Rum casks. There is also a similar stout brewed with blackberries named after the Mayan Bat God. Some of these are only available in limited quantities at the taproom or to members of El Catador Club. This is a small society of craft beer enthusiasts who pay for exclusive access to Cigar City’s cask aged beer. Past bottles available to members include Da Un Beso a La Botella, a stout inspired by Guinness Foreign Extra and aged in rum barrels, or Trousseau, a Barleywine aged in Madeira wine casks. Members also get a discount on any purchases made at the taproom. Ultimately, the El Catador Club is beneficial to members, but it also helps Cigar City to remain focused on the true ethos of small batch beer as they grow into one of the largest craft brewers in the United States. 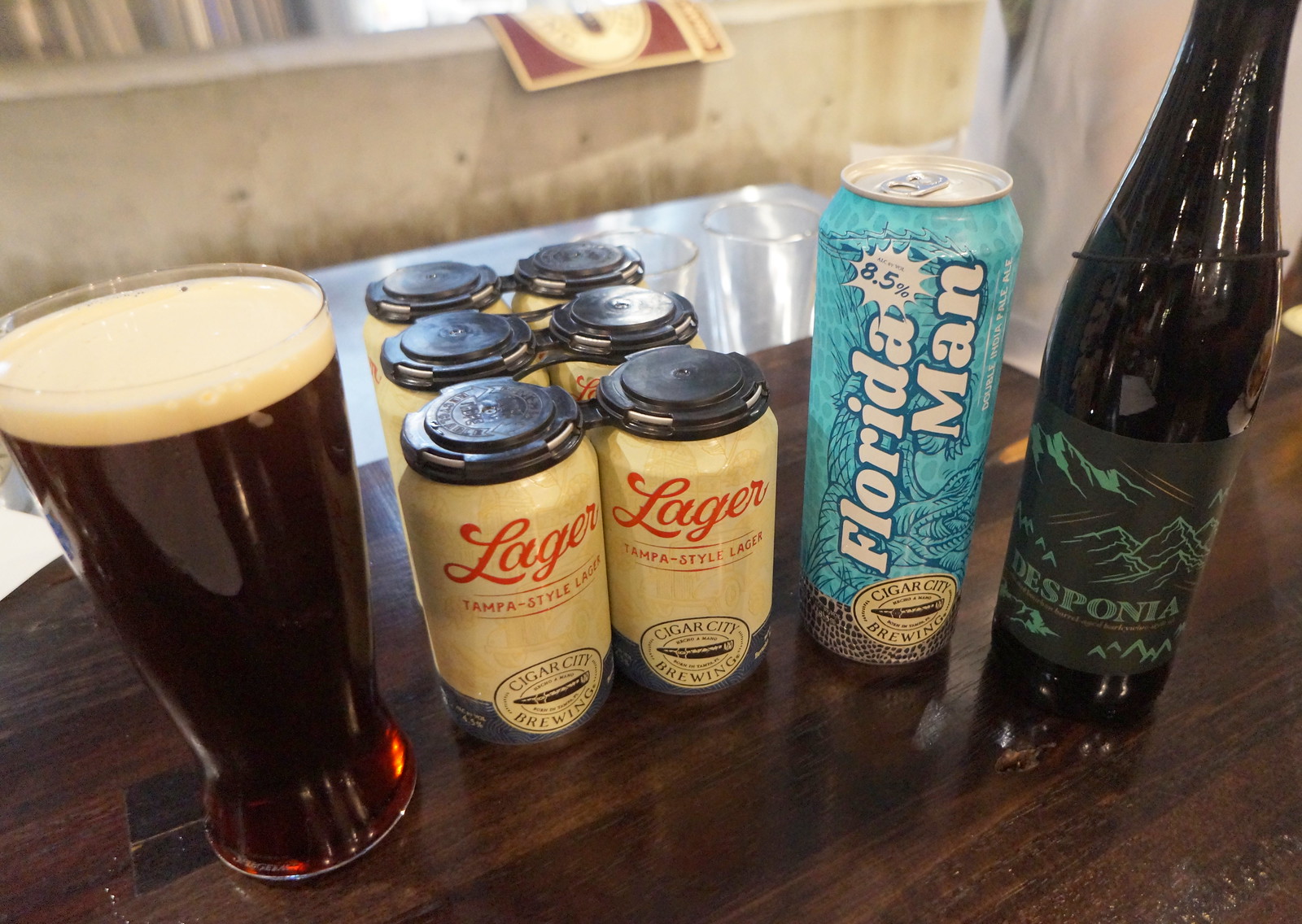 Products from the Brewery. El Catador Club exclusive bottle is on the right
FacebookTwitterPinterestLinkedinEmail