If sipping tropical cocktails on a white sand beach is your idea of the perfect Caribbean vacation, then Barbados might be your ideal Caribbean destination. Most of the island’s coastline is graced with silky white sand and clear blue water, and since Barbados is the birthplace of rum; it’s possible that people have been drinking cocktails on the beaches of Barbados for hundreds of years. 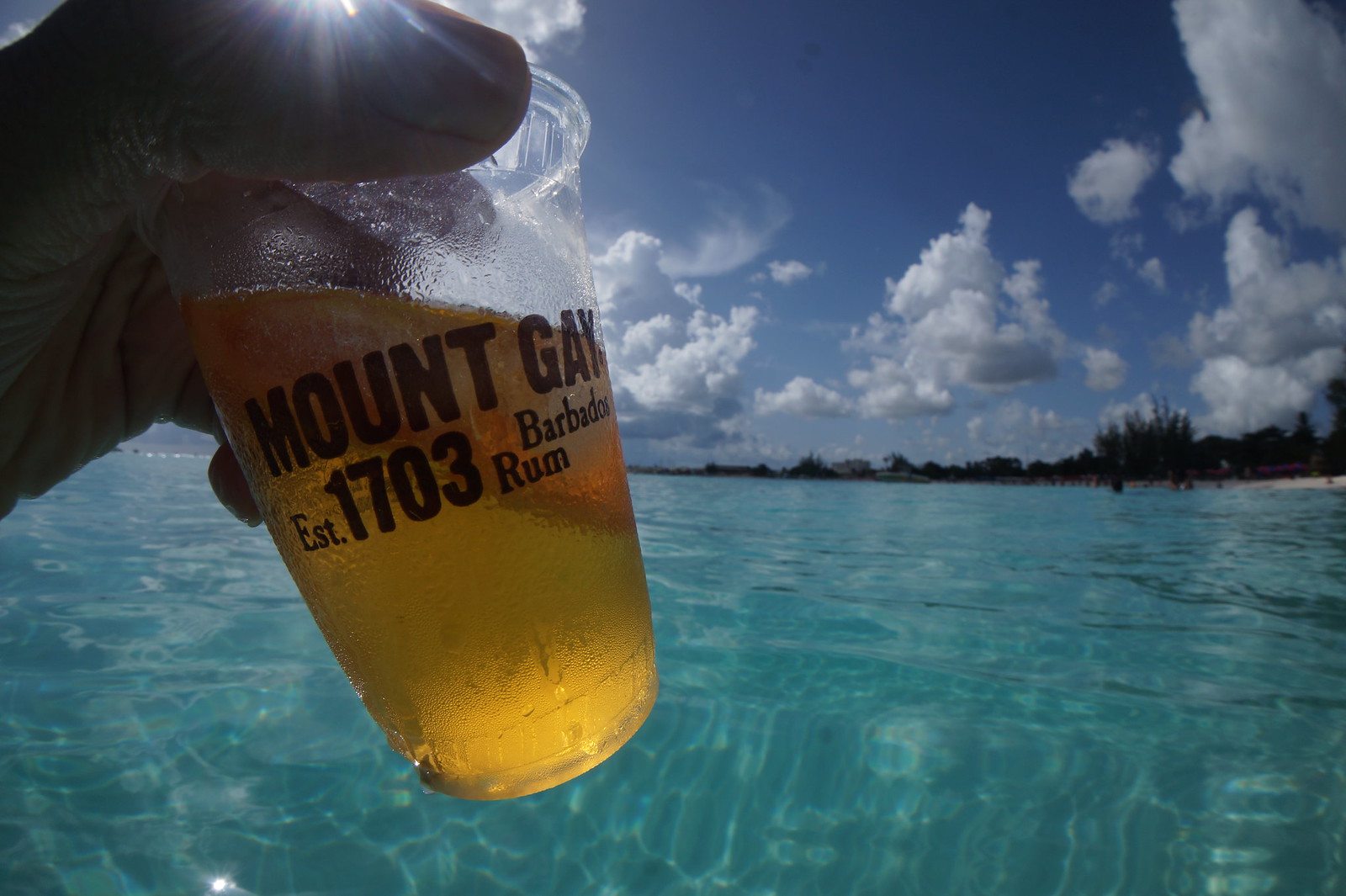 A deed to a plot of land granted to a distillery named in honor of Sir John Gay can be traced back to 1703. This makes Mount Gay the world’s first commercial rum distillery and one of the oldest continuously operating distilleries in the Western Hemisphere. A trip to Mount Gay Distilleries should be on everyone’s Barbados Bucket List, whether you’re interested in rum, or about the history and heritage of Barbados. The Mount Gay Rum tour starts with a complementary Black Barrel Rum Punch that’s enjoyed while being guided through exhibits that relate to the history of the Mount Gay Distillery. 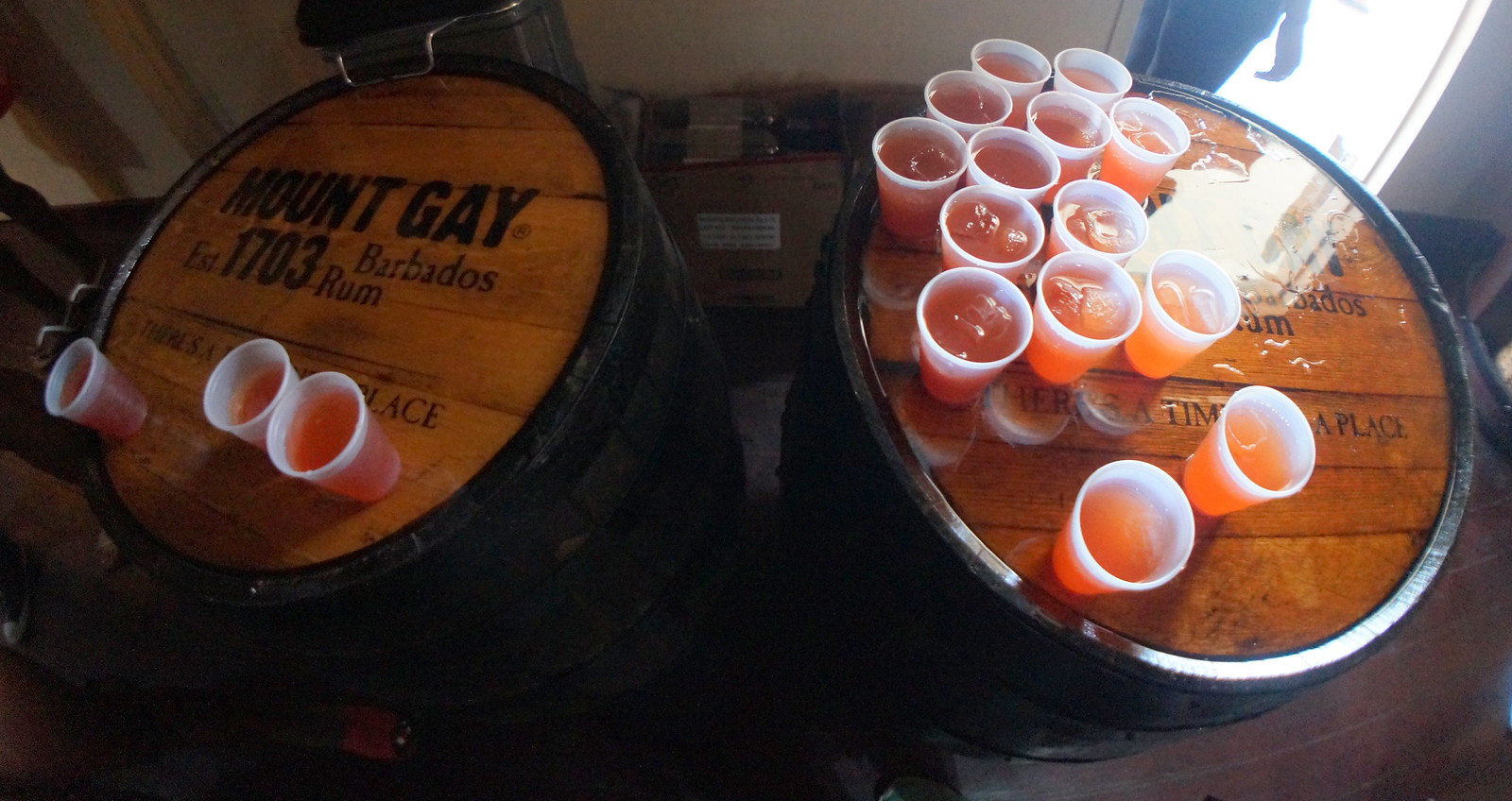 On display is the original deed as well as limited edition rums that were specially blended to mark important milestones for the company and for Barbados. Mount Gay Tricentennial was specially blended with rums from 1969, 1974 & 1976 to mark their 300th anniversary in 2003.
The more recently released Mount Gay XO Cask Strength celebrates fifty years of Barbadian independence. 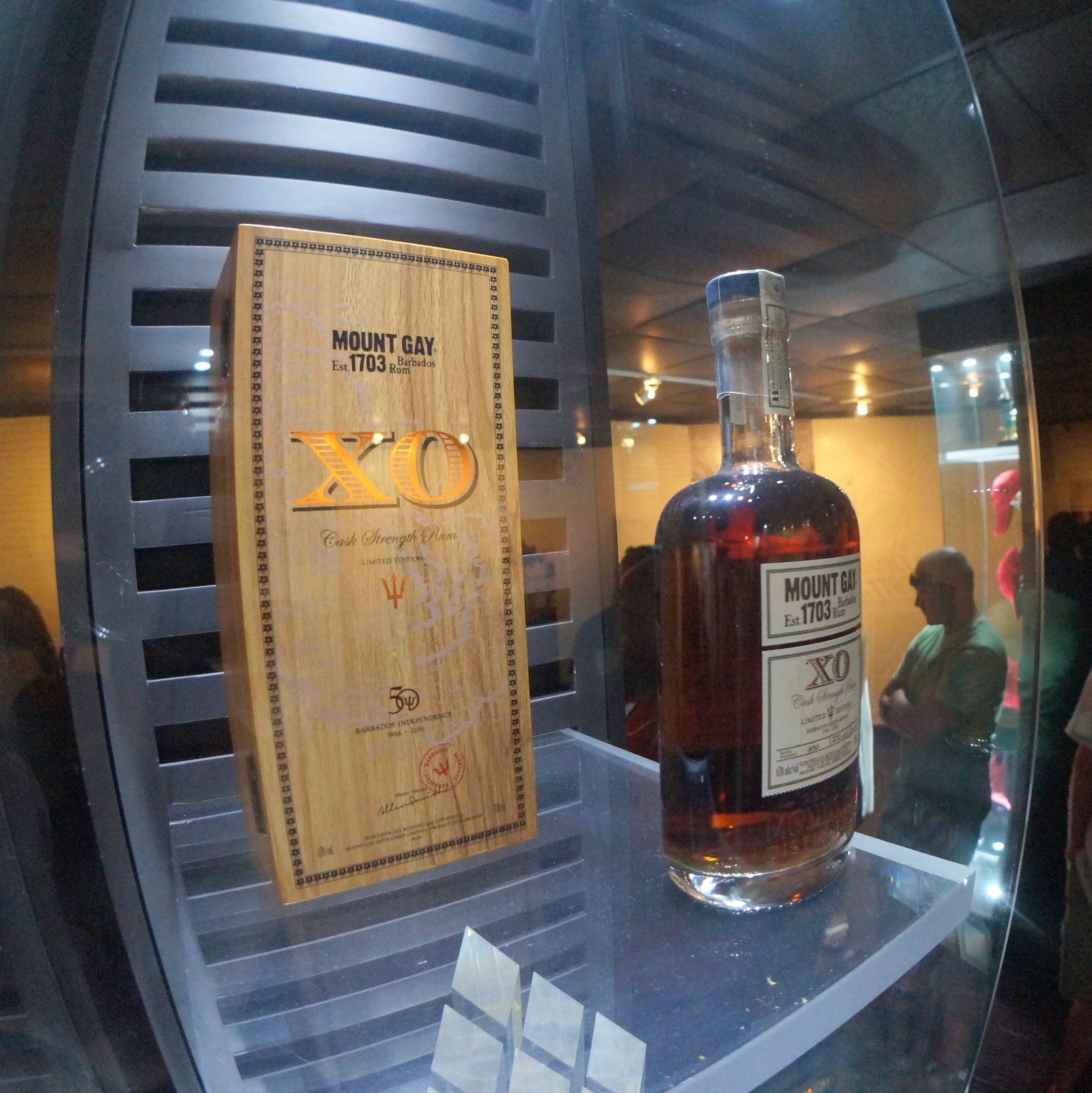 The tour continues with a short movie that goes into detail on the invention of rum on the island and the realization that the harsh spirit got smoother by spending time in oak casks during the long voyage back to England from Barbados. The film also explains how the use of coral-filtered water, charred casks, and both a copper pot still and column still are used to create the signature Mount Gay aroma and flavor. Armed with the knowledge needed to properly appreciate fine rum, it’s now time for a guided tasting of five rums.

Mount Gay Eclipse has traditional rum notes of brown sugar and bananas, with just enough citrus zest and spice for a challenging sip. This rum is ideal for mixing tropical cocktails while relaxing on a beach in Barbados or imaging relaxing on a Caribbean beach. 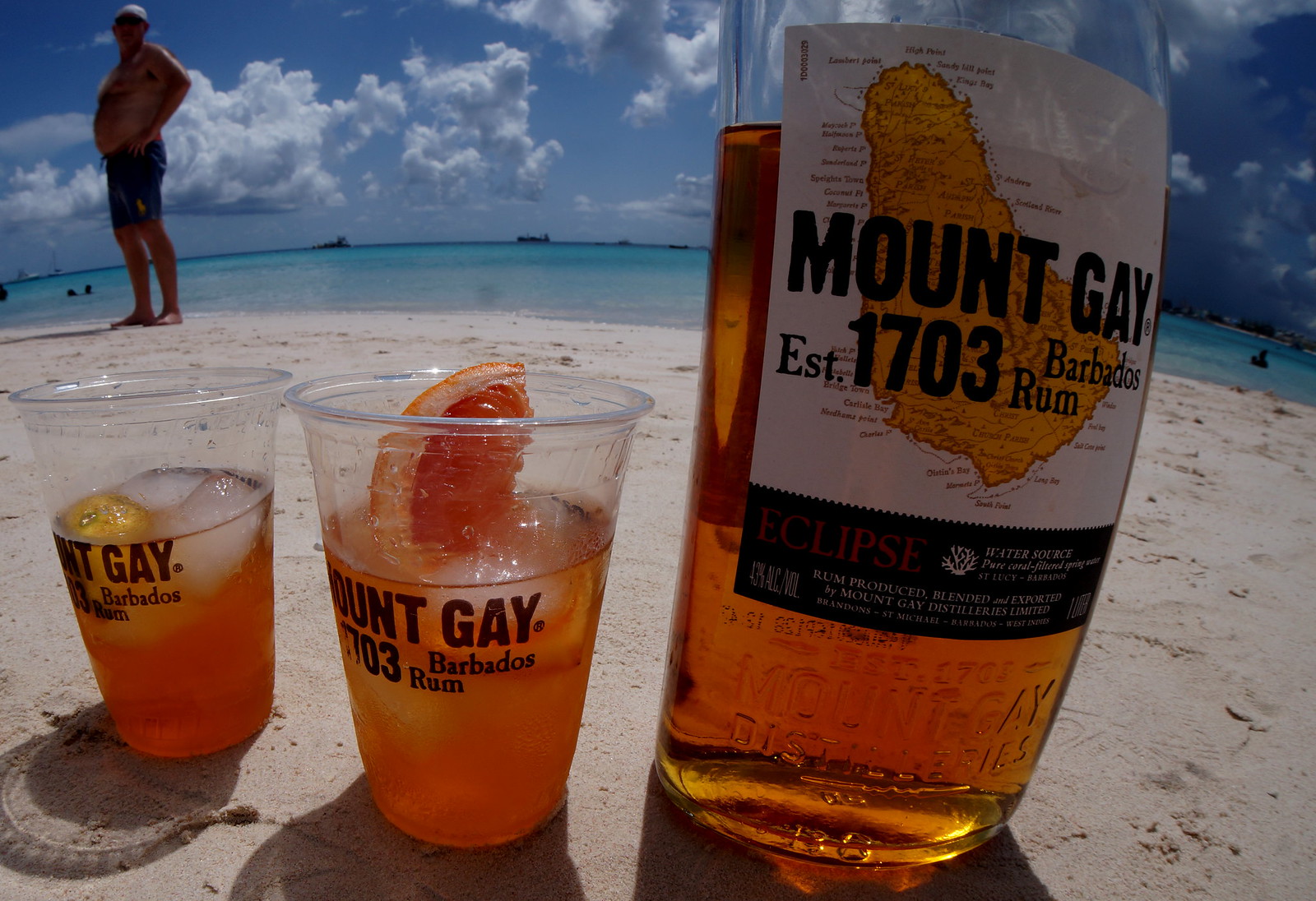 Mount Gay Black Barrel spends some extra time in heavily charred bourbon casks, and a warm smokiness is evident. A sweet yet spicy smokiness that lingers, along with some mild hints of caramelized bananas and vanilla.

Mount Gay XO is smooth and decadent. All of the pleasant notes of the previous rums inter-mingle against a backdrop of rich dark chocolate and raspberries. You can immediately tell that this is a rum to be sipped slowly and savored. 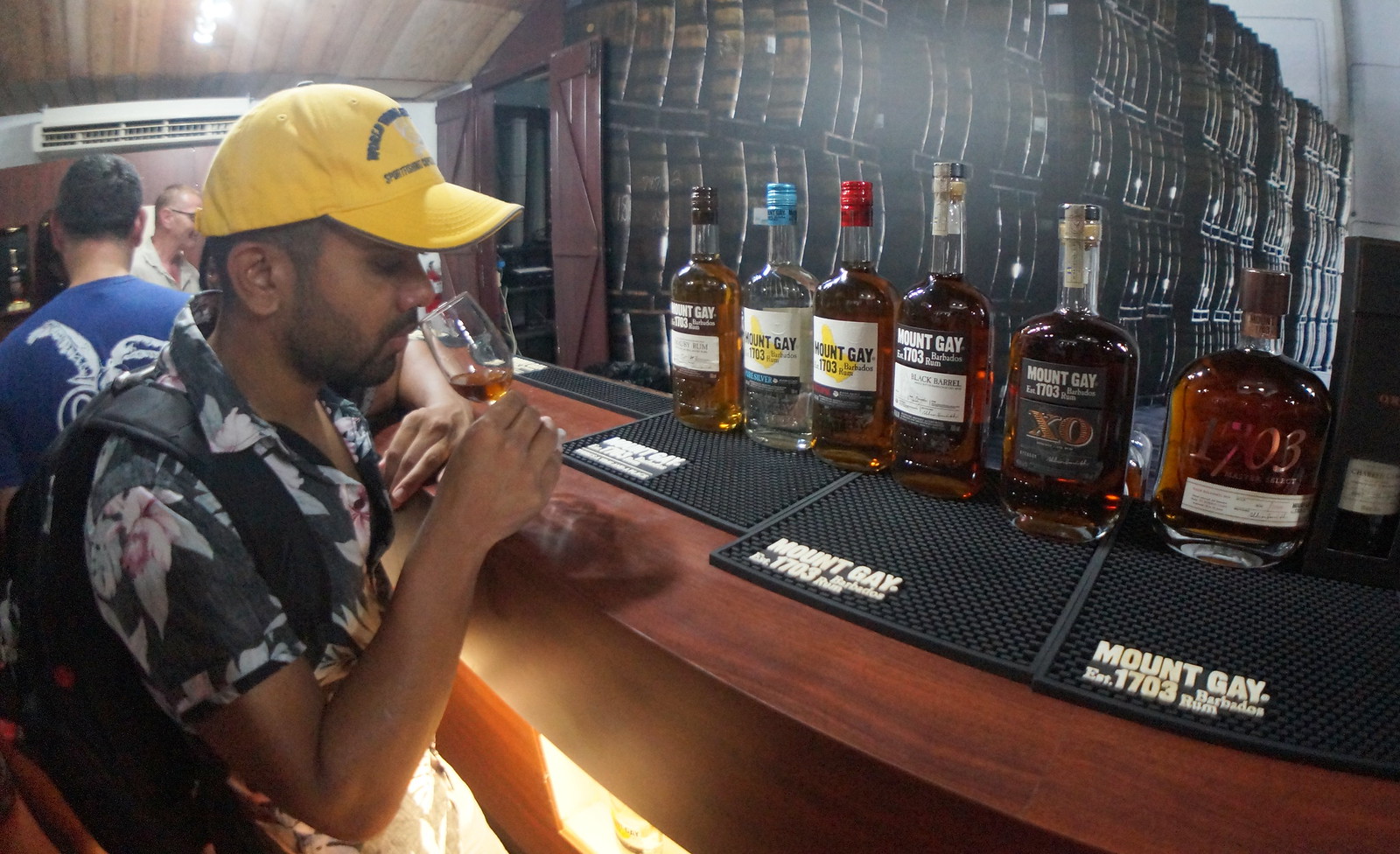 The final sample is special since it’s a spiced rum that’s only available locally.
Mount Gay Mauby Rum is steeped with the aromatic bark of the Colubrina Tree. Iced and sweetened mauby tea is actually a popular beverage on many other Caribbean islands, but mauby flavored rum is certainly something unique. 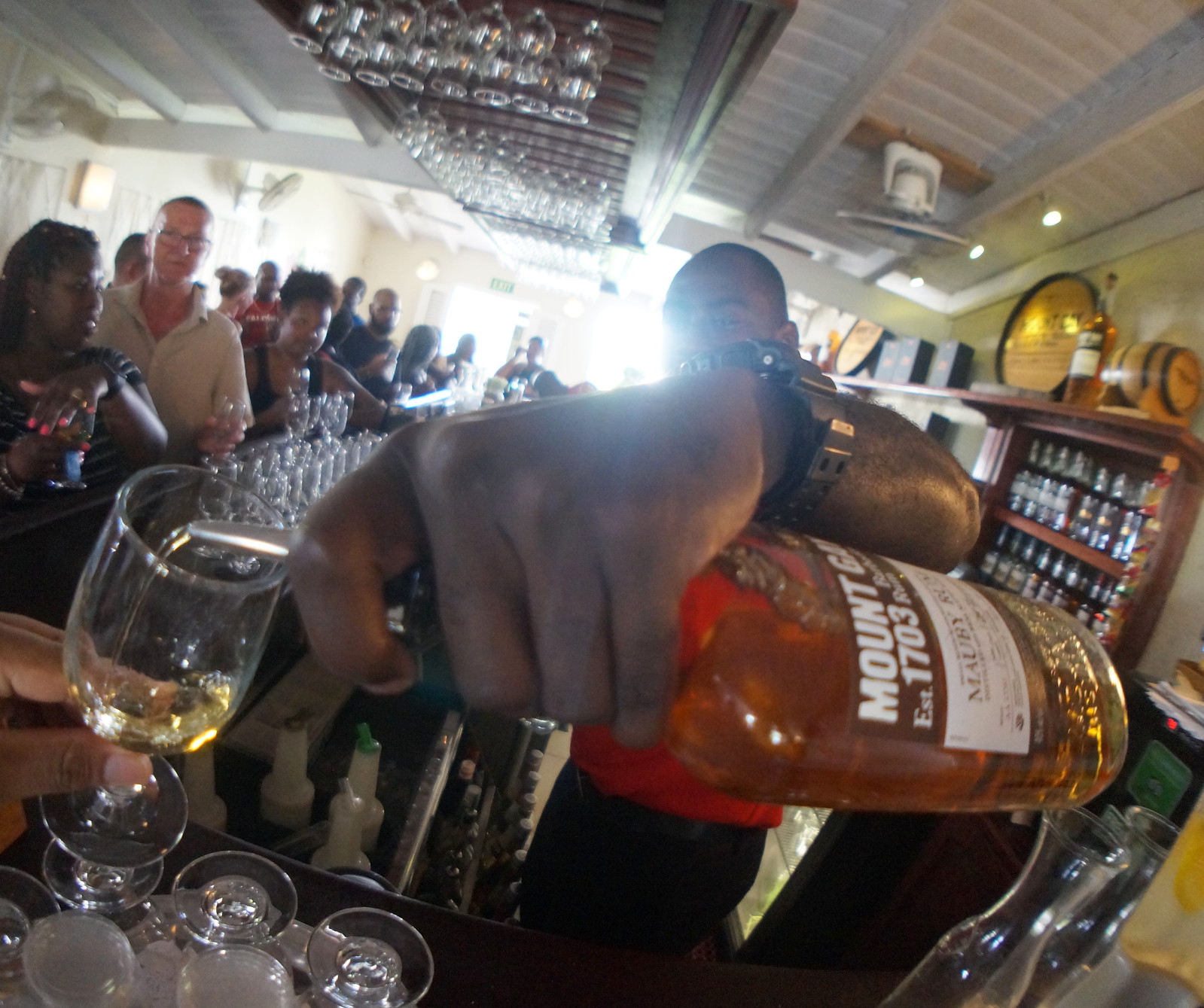 The Mount Gay Rum Tour is ideal for gaining a new appreciation for rum while also learning about the legacy of an iconic Bajan Institution. The time-honored traditions still used to create rum in Barbados are truly admirable. The additional Mount Gay Cocktail Experience takes it one step further and adds a fun and interactive aspect to the rum tour.

The Cocktail Experience begins in the bar at the Visitor Center. The bartender guides participants in mixing a mojito using Mount Gay Silver Rum while explaining the basics of bartending utensils. He also carefully describes the nuances of a great cocktail before leading everyone outside to their work stations. 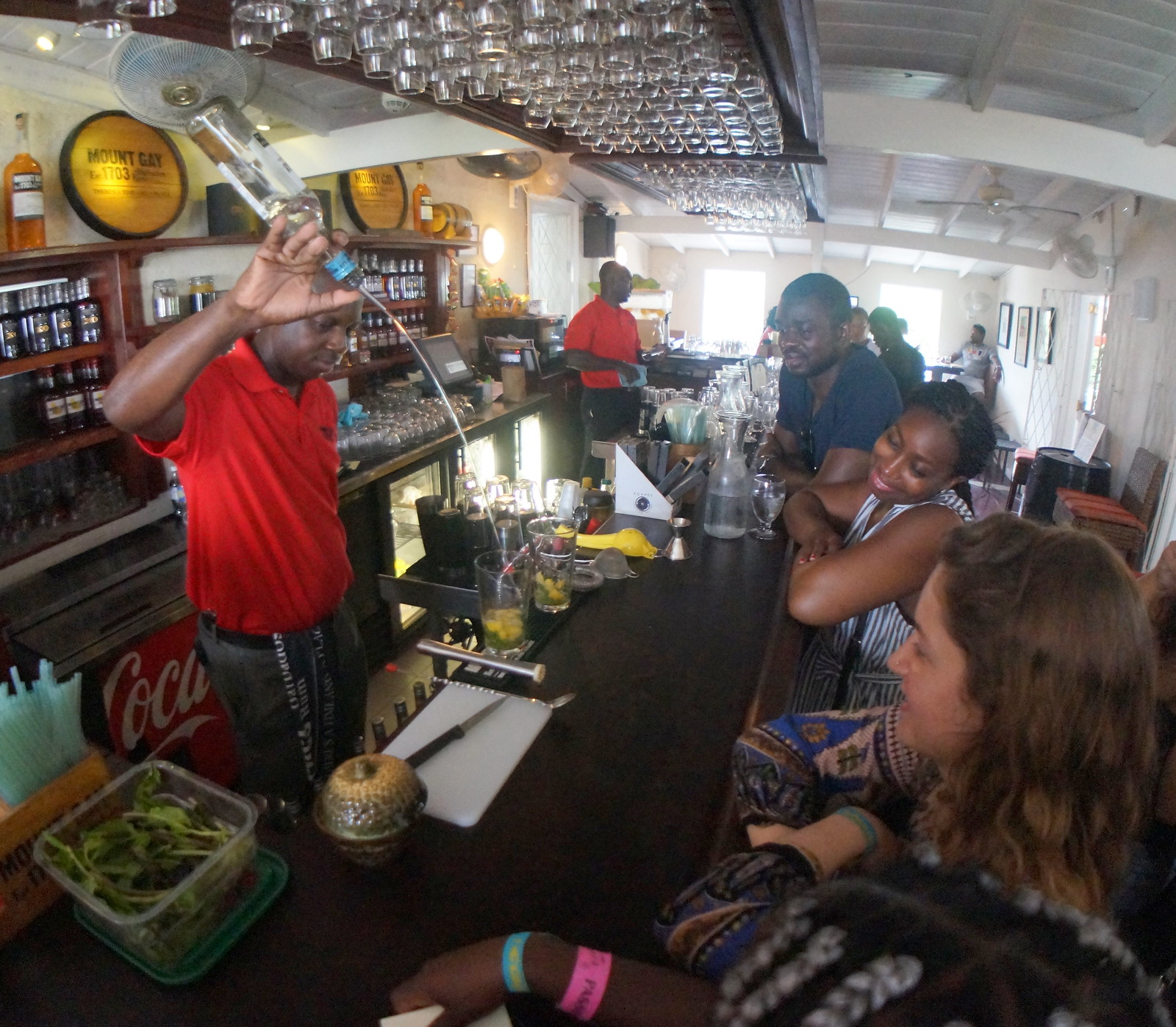 Once outside, the ingredients at hand are revealed. In addition to rum there’s Angostura Bitters, Falernum and Grenadine plus a wide variety of fresh fruits, vegetables, herbs and juice. 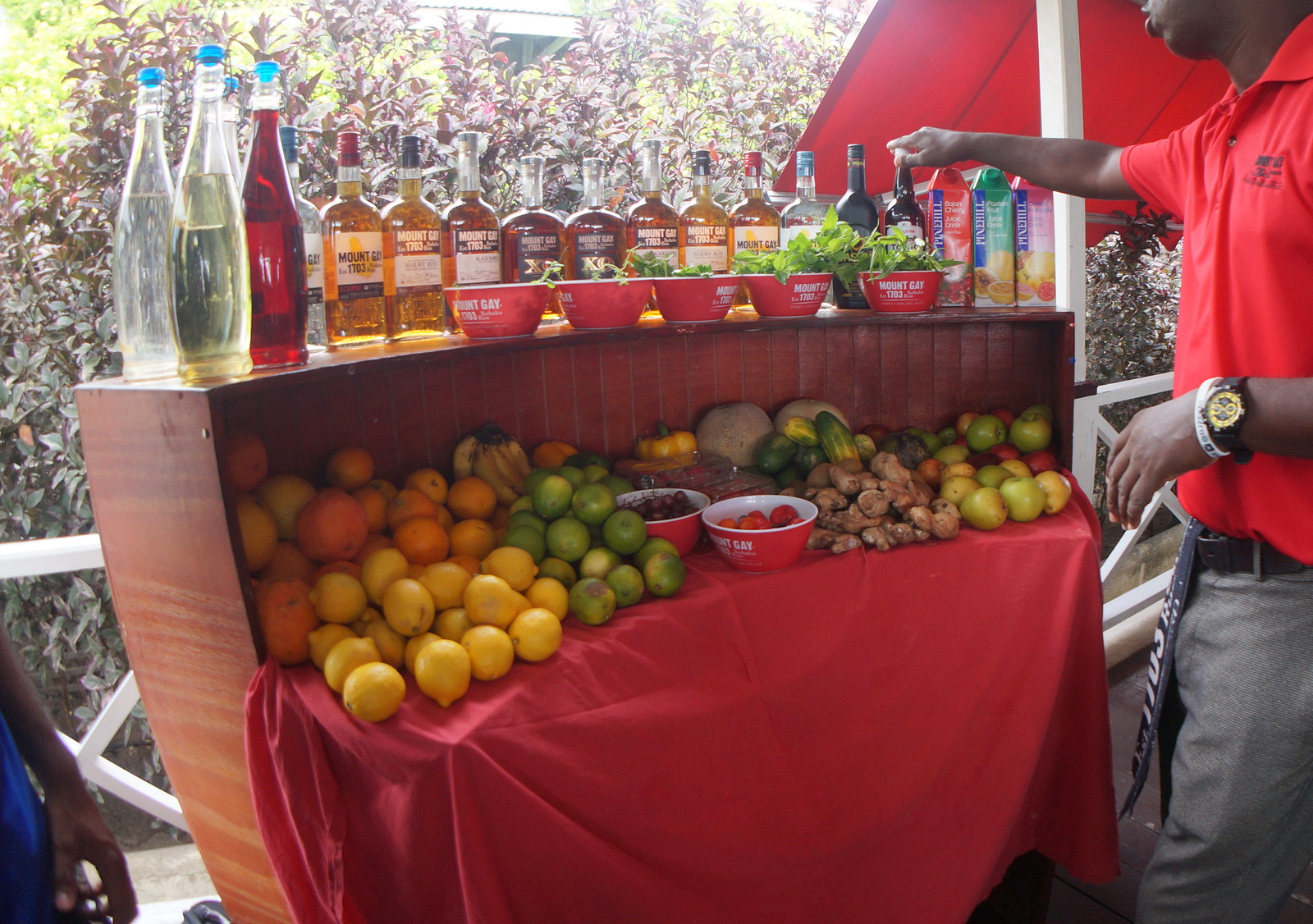 There’s a flurry of excitement as everyone begins cutting up fruit, and whipping up small batches of their ideal rum cocktail, taking small sips, then tweaking the recipe accordingly. The fun part is knowing that you get to taste every single one afterwards! 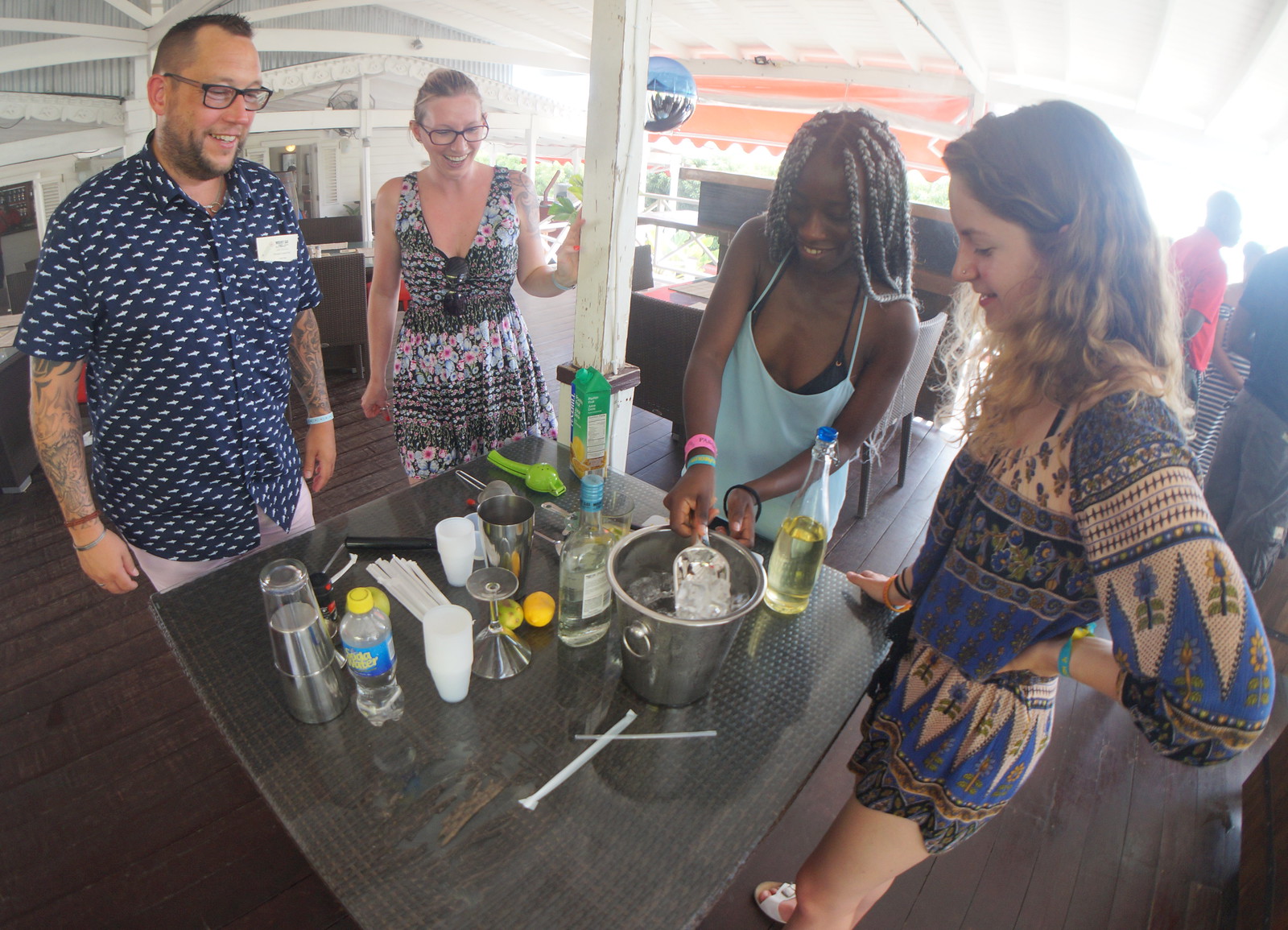 My table decides to keep it simple by mixing a rum swizzle that features two iconic Barbados products; Mount Gay XO Rum, and Falernum a liqueur made at the Foursquare Rum Distillery.

Although there’s guava juice, cherry juice and passion fruit juice we decide to simply squeeze a fresh lime directly into the shaker. Lime adds that needed citrus tang while still allowing the main ingredients to shine. 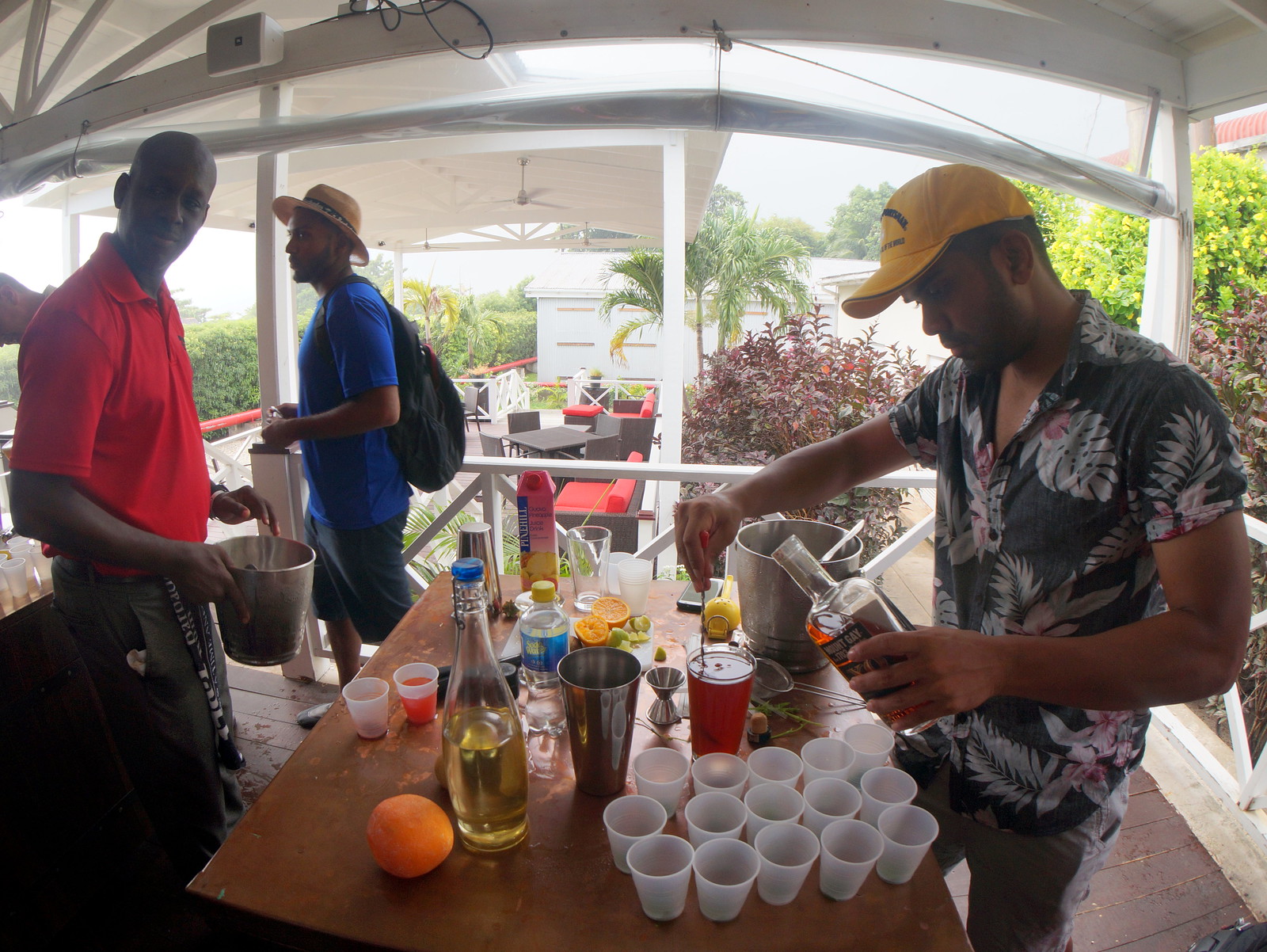 For a final garnish, a few dashes of Angostura Bitters and a mint leaf does the trick. This was our cocktail, our take on a Barbadian Swizzle influenced by the Queen’s Park Swizzle. 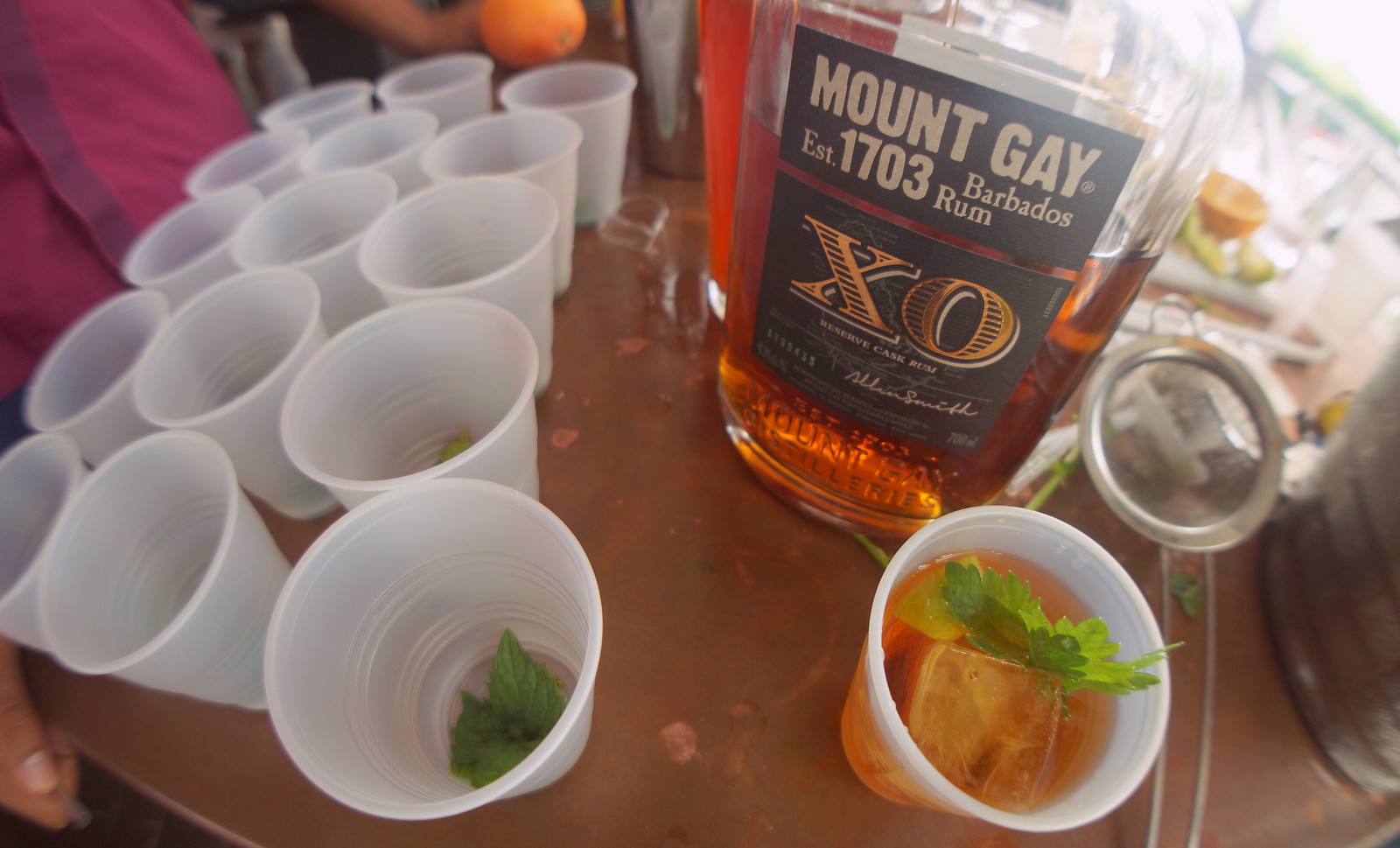 Everyone is a winner in this cocktail competition; all participants receive a small bag with some Mount Gay goodies including a coaster and a miniature bottle of Black Barrel. Transport to the Mount Gay Visitor’s Center is provided to everyone on the cocktail tour, and before departing there’s one last chance to pick up some souvenirs or drink some more rum. At the conclusion of the Mount Gay Rum tour, it’s now possible to see the Gift Shop with a new pair of eyes.

It’s easy to decide on memorabilia like caps and coasters, but deciding on a bottle of rum to take as a keepsake is difficult. Mount Gay 1703 Signature Blend is their flagship product and it includes some of their rarest rums, but the Mauby Rum is also rare since it’s difficult to get outside of Barbados. In the end I decide to go with both editions of the Mount Gay Origin Series; four limited edition bottles of rum that collectively tells the Mount Gay story. 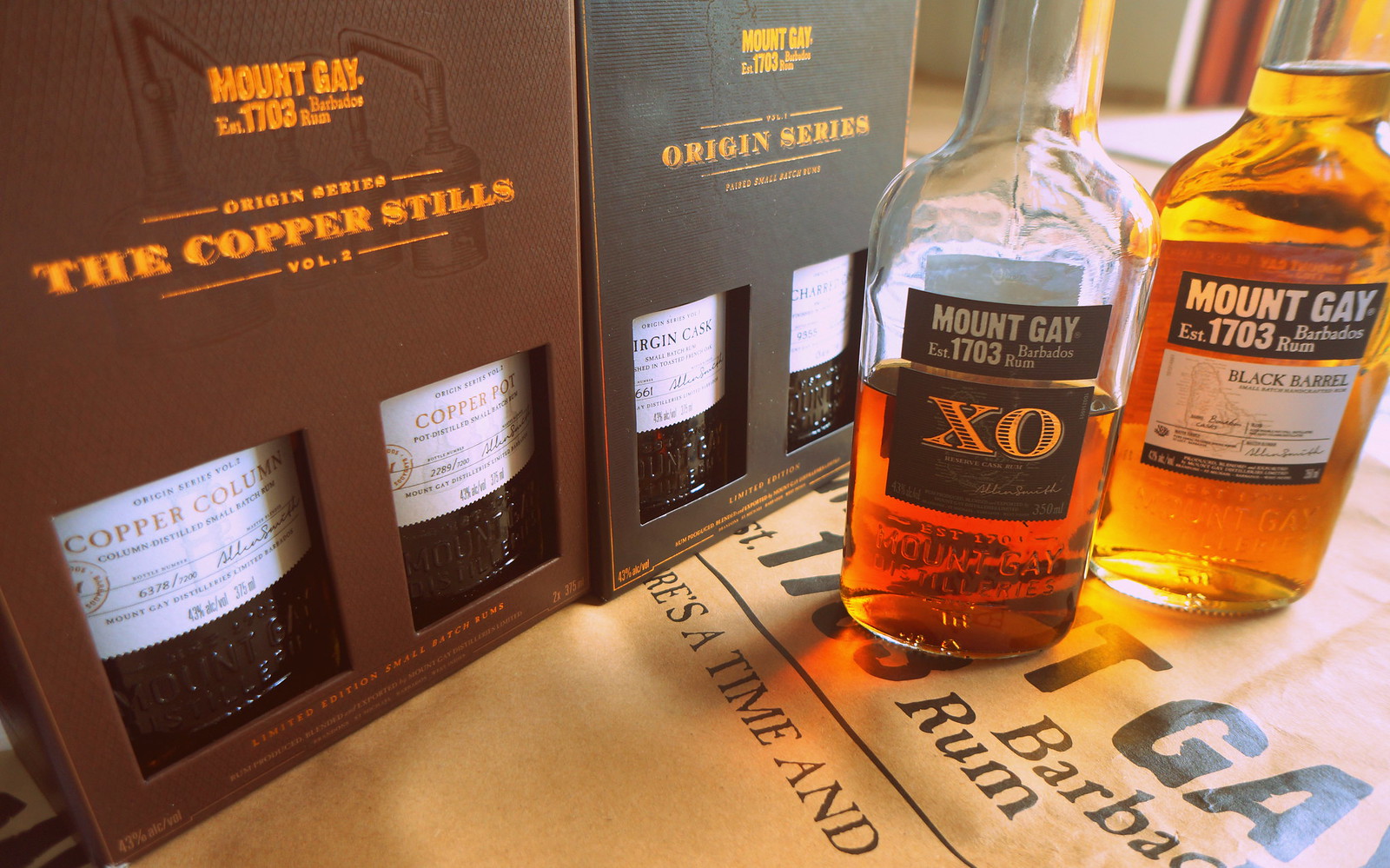 A story of rum from pot stills and copper stills and their place in creating a great rum. A story of time spent in charred bourbon casks and virgin french oak, and how this changes the character of the rum.

As they say at Mount Gay Distilleries, There’s a Time and Place.

Are Lollapalooza VIP Tickets Worth It?

How To Spend Three Days In Chicago

Spending a Day at The Grand Canyon