The Pitons, comprised of Gros Piton and Petit Petion are mountain peaks in Saint Lucia that seem to dramatically rise from the ocean into the sky. Distinct, and visible from afar, they are possibly the most recognizable mountains in the Caribbean, and the most photographed landmarks in Saint Lucia. The Pitons are pictured everywhere, from souvenirs like postcards and magnets, to the labels of the local beer and rum brands. A visit to Saint Lucia is not complete without hiking the Pitons and enjoying the view from the peak. 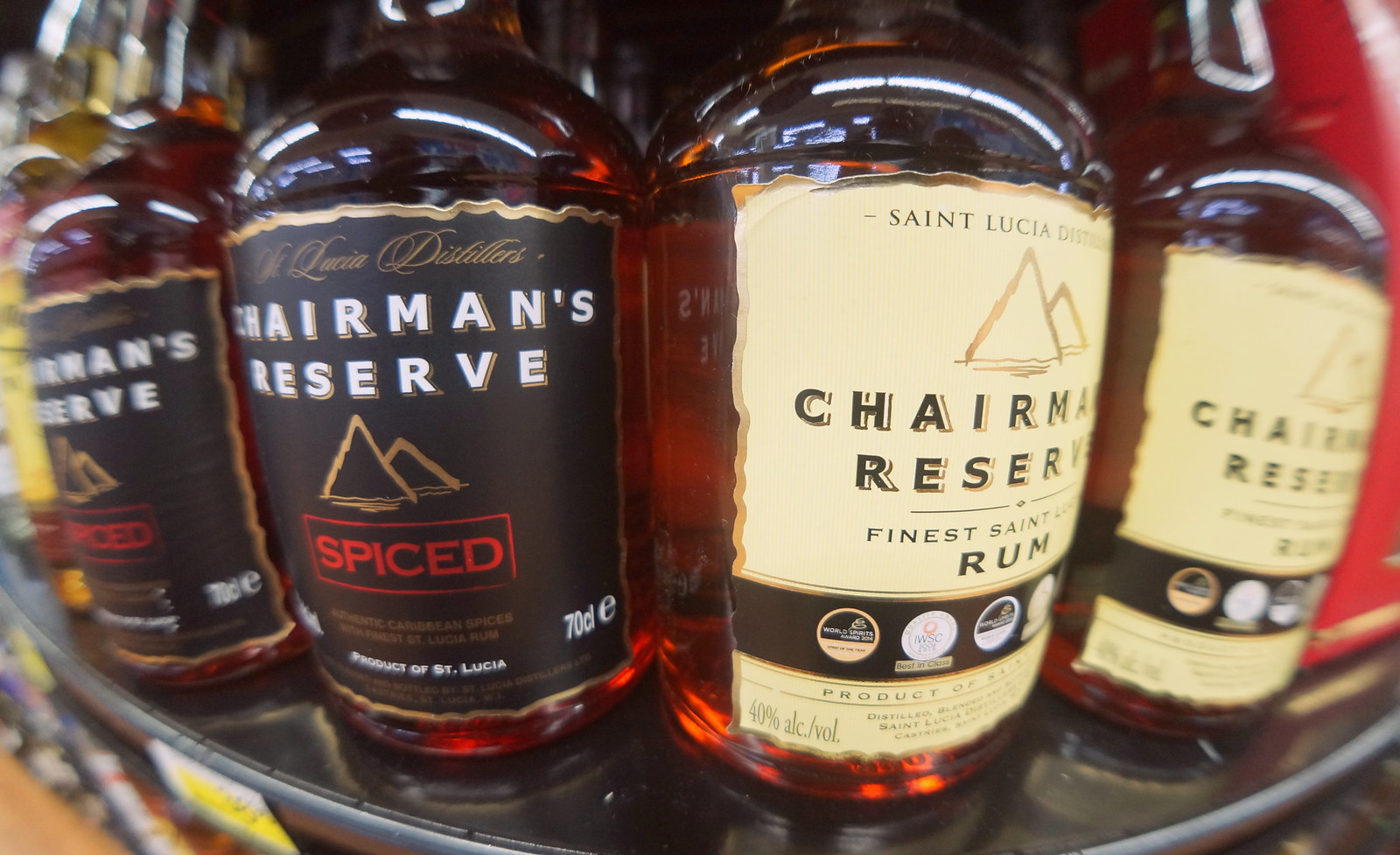 Hiking to the top of Petit Piton, the less tall of the two is surprisingly seen as the more challenging hike. This is due to how steep the trail is compared to Gros Piton, and the fact that ropes are needed near the summit. By no means however, does this mean that hiking to the top of Gros Piton is easy. It is still over 2,500 feet, and almost 100 feet taller than its sister Piton. Several companies offer excursions that involve hiking the Pitons, including Real Saint Lucia Tours, a locally owned company that offers customized tours suited to any individual preference. The day begins with a hotel pickup from the Real Saint Lucia Tours driver. The destination for the day is the Pitons Management Area, a UNESCO World Heritage Site that includes several thousand acres of land and ocean. The rationale for the Pitons being the center of a World Heritage Site rests on their geological significance as two of the most prominent volcano plugs on the planet, and the spiritual significance that they had to the earliest inhabitants of the island. To the Amerindians of Saint Lucia, these mounds rising into the heavens and the steaming volcanic pools at their base were seen as the home of the gods. All of this, along with the history of French and British colonization in Saint Lucia is explained at the beginning of the trail before the hike begins. 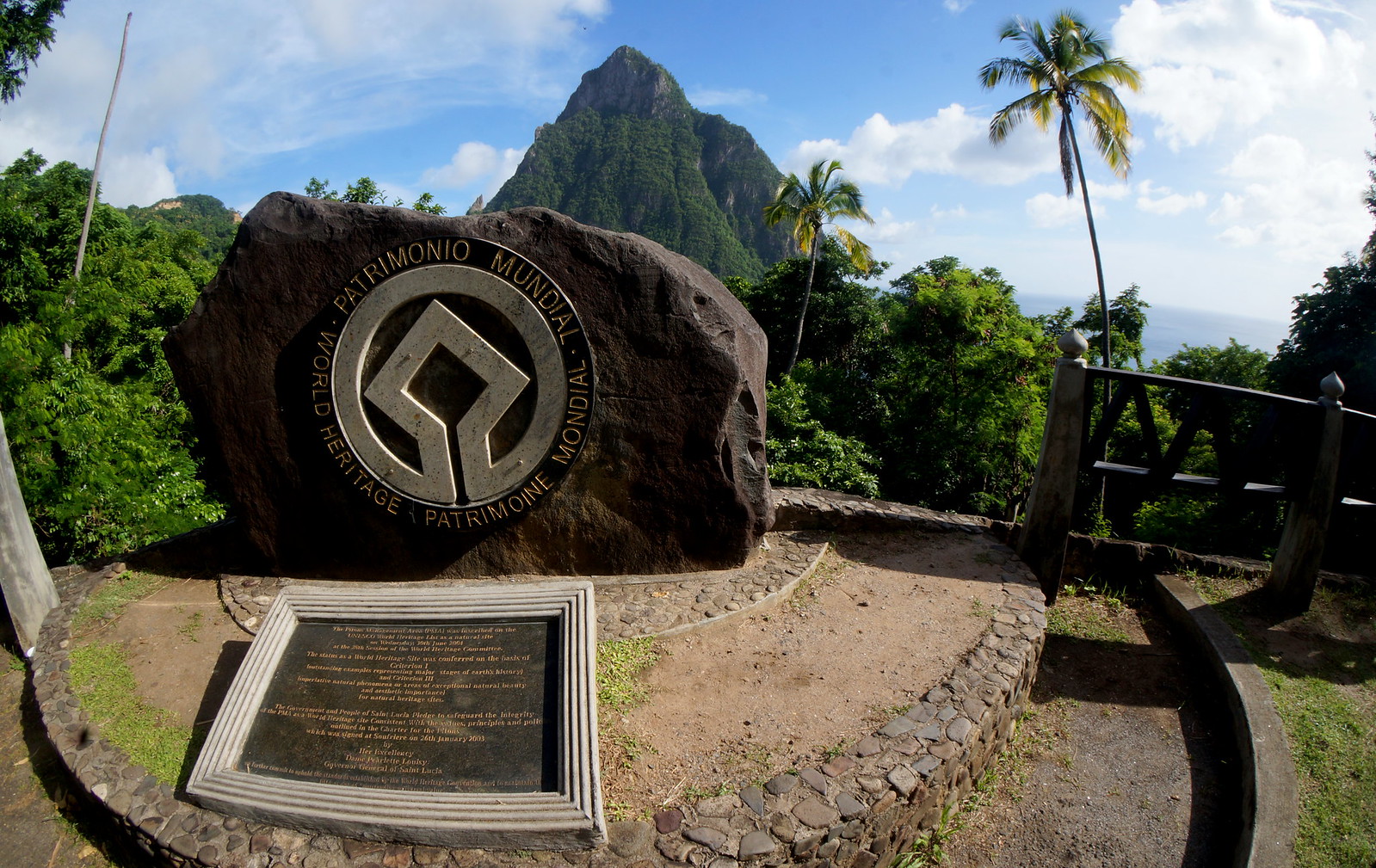 The Gros Piton trail is divided into four quarters, each quarter takes about thirty minutes to complete, and at the end of each quarter there is a bench for hikers to take a brief rest. The first quarter is the easiest portion, the gently sloping trail gently winds around the base of the mountain. Distant beaches slowly come into view and there is a refreshing sea breeze blowing. At the end of the first quarter, there are stunning views of Anse L’ivrogne Beach and some of the coves that hug the south-western side of Saint Lucia. 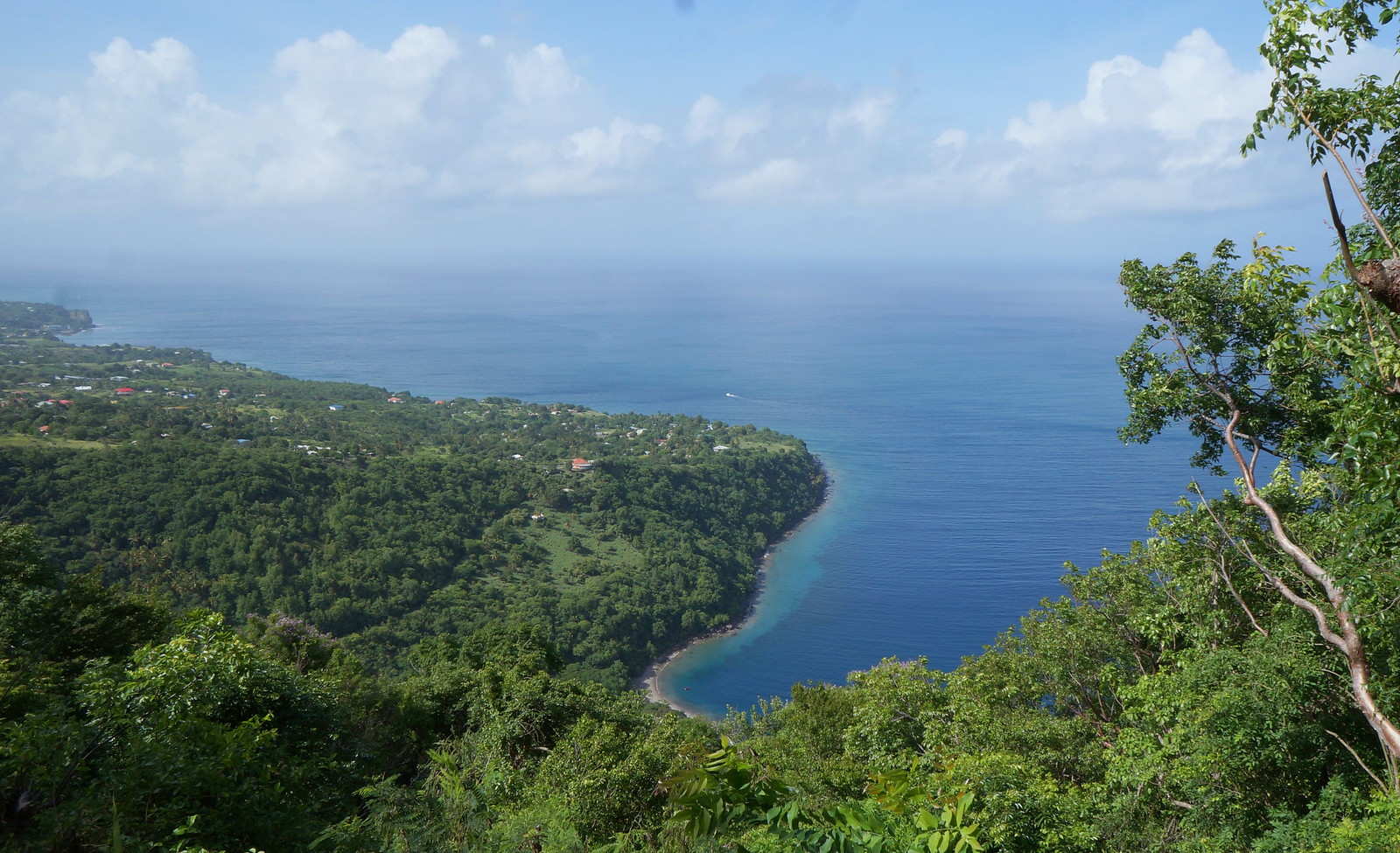 The second quarter is still easy but the increasing steepness of the trail becomes noticeable. Just like at the first bench, the second bench also offers a splendid view; instead of a beach this time, it’s Petit Piton towering majestically into the sky from the ocean. 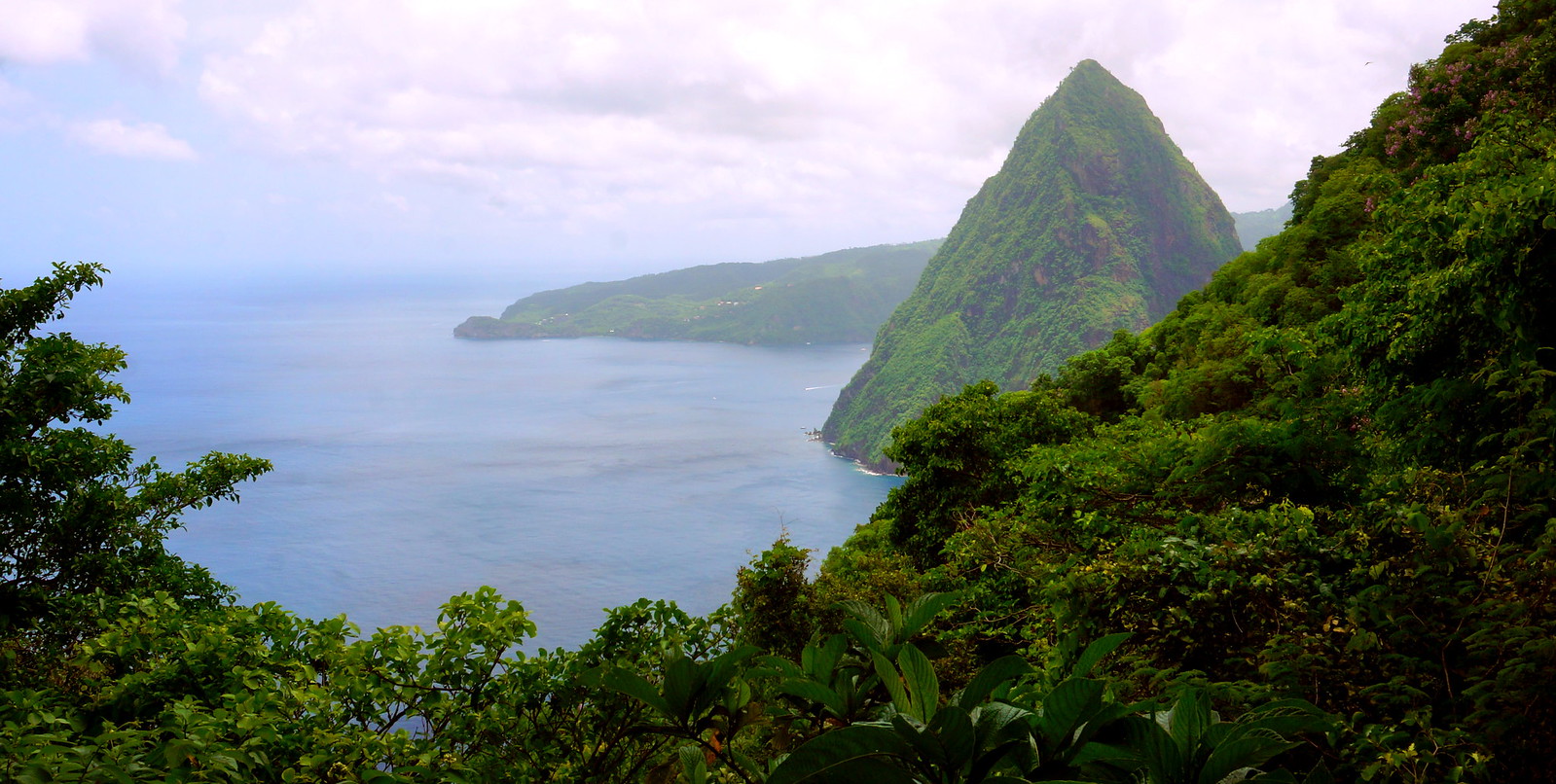 From here, the second more difficult half of the hike begins. The trail now ascends almost vertically instead of making its way slowly around the side of the mountain. Tall trees and thick ferns that block the view of the ocean. There is no longer a view of the Caribbean Sea, so it’s easier to focus on scrambling up the natural staircase made by the roots and rocks to get to the top. Gone with the view however is the refreshing sea breeze, replaced instead by a sweltering jungle heat. The third and final bench is surrounded by towering mountain trees, the barks of which have been used in medicinal bush rum for centuries. There is also an ancient mango tree that has been there for over two hundred years. 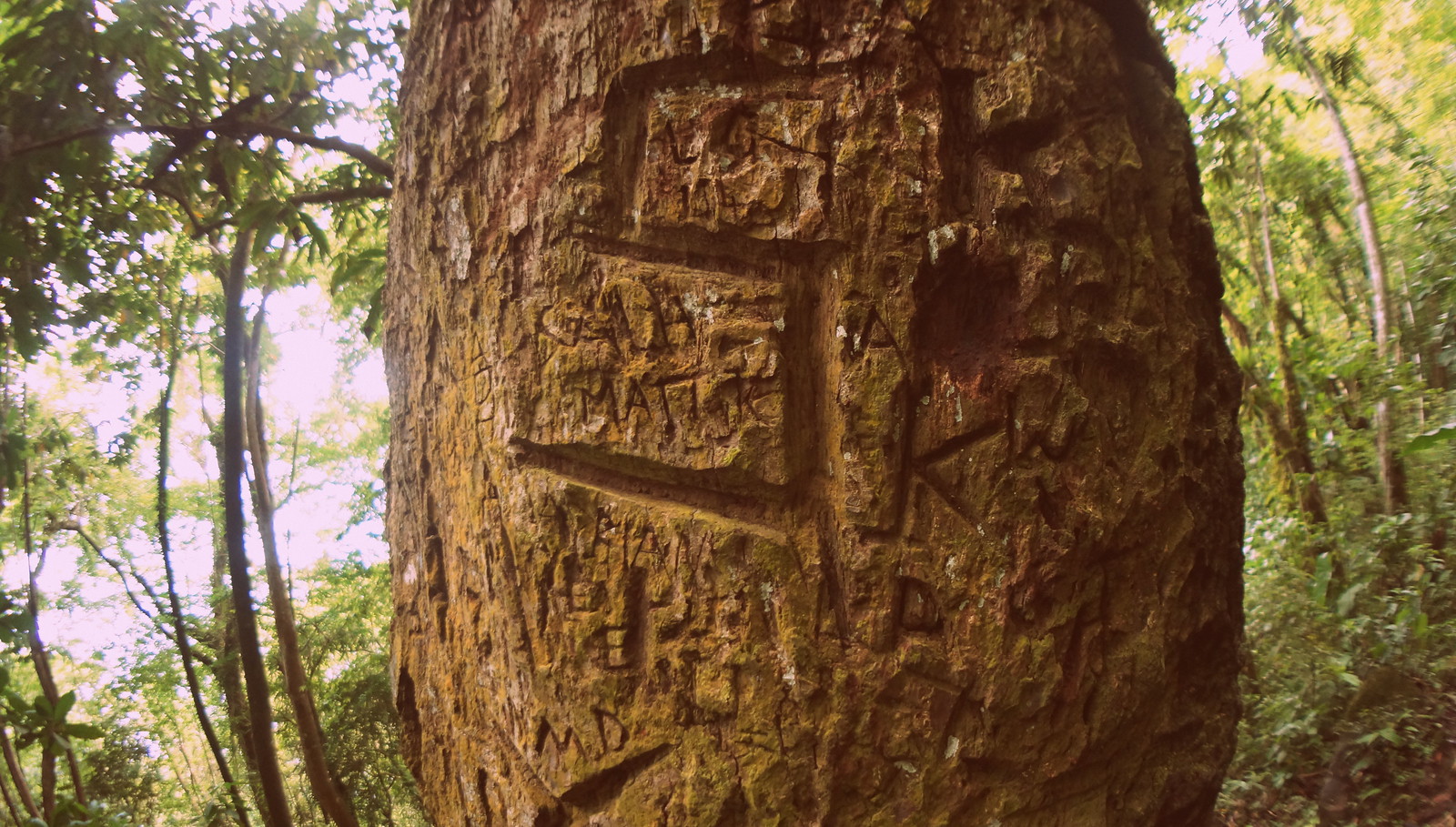 gnarled wind-stunted plants growing among volcanic rocks. On a clear day, the view from the summit of Gros Piton includes other Caribbean islands like Martinique and Saint Vincent. Even on a cloudy day, Saint Lucian towns like Vieux Fort and Laborie in the distance quite clearly. Enjoying the view and the refreshing breeze is a priceless experience. 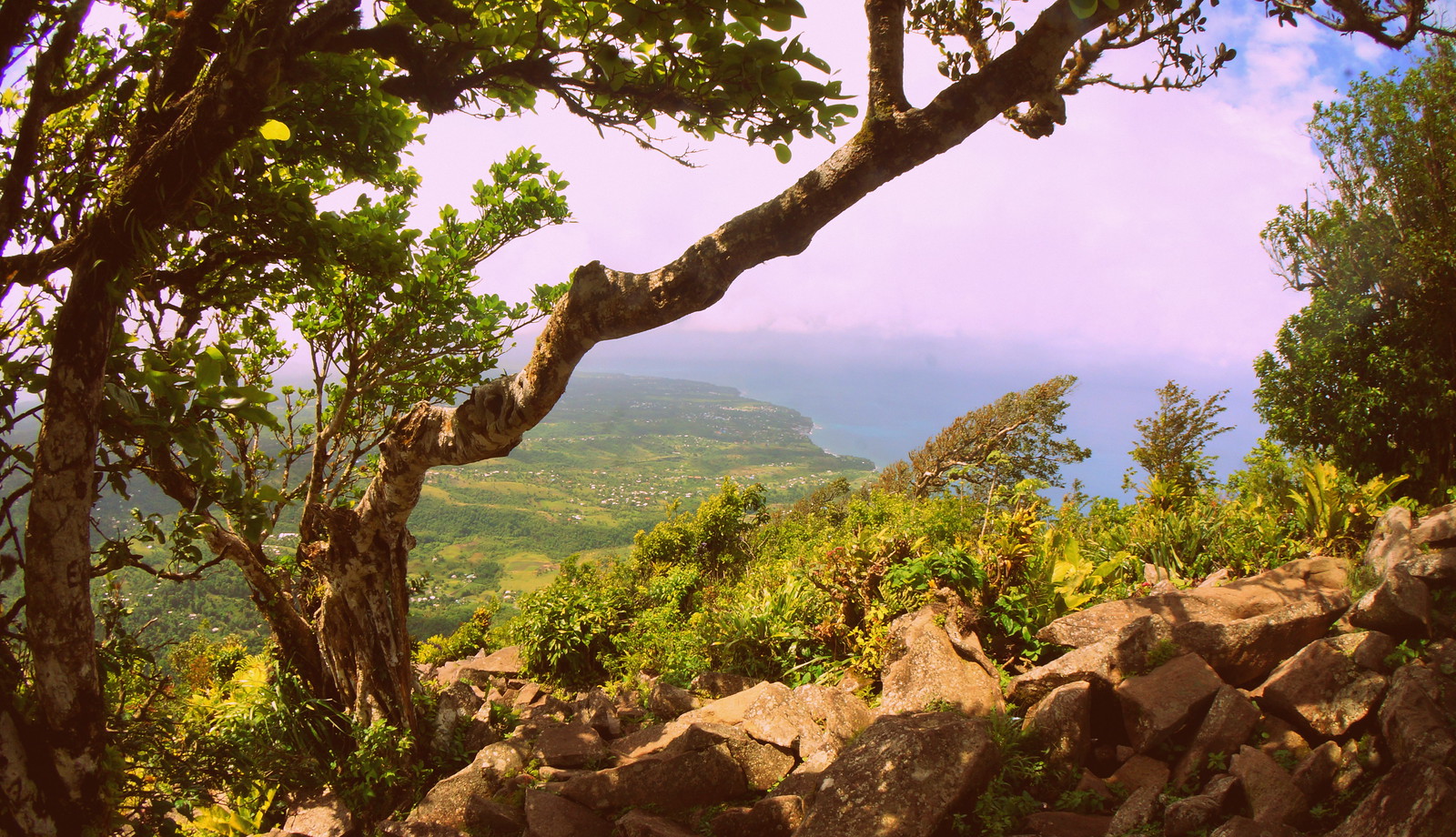 The way back down is less physically demanding but still challenging since it requires precise foot placement to avoid slipping. The reward at the end of the hike is a refreshing Piton Beer, pulled from the cooler of the Real Saint Lucia Tours van. A few ice cold beers while enjoying one of the best views of the Pitons in Saint Lucia is in order before heading to the next destination; La Soufrière Drive-In-Volcano and Sulphur Spring. 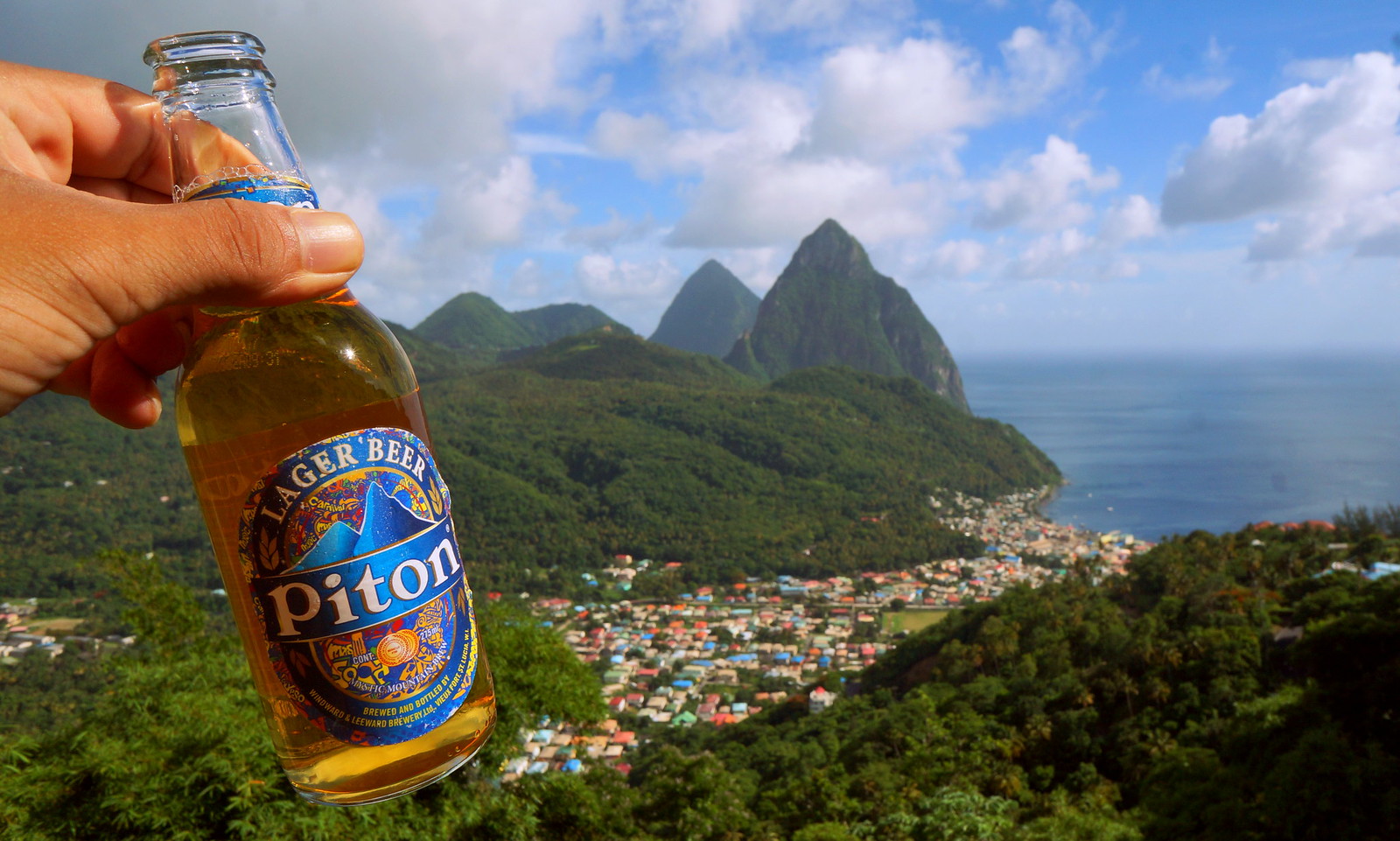 The dormant Qualibou volcano is regarded as the only drive-in volcano in the world. The caldera that collapsed over 400,000 years ago is actually the hottest and most active geothermal area in the Lesser Antilles. Although dormant, the smell of sulfur fills the air and the volcano is always steaming and hissing. A mud bath and sulfur spa has been built where a small stream leaves the hottest part of the crater. The mineral-rich water has several health benefits and helps to restore beautiful skin. The ideal time to experience this natural spa is right after hiking Gros Piton since sweating after such a strenuous activity opens up the pores of the skin so that the minerals can be better absorbed. 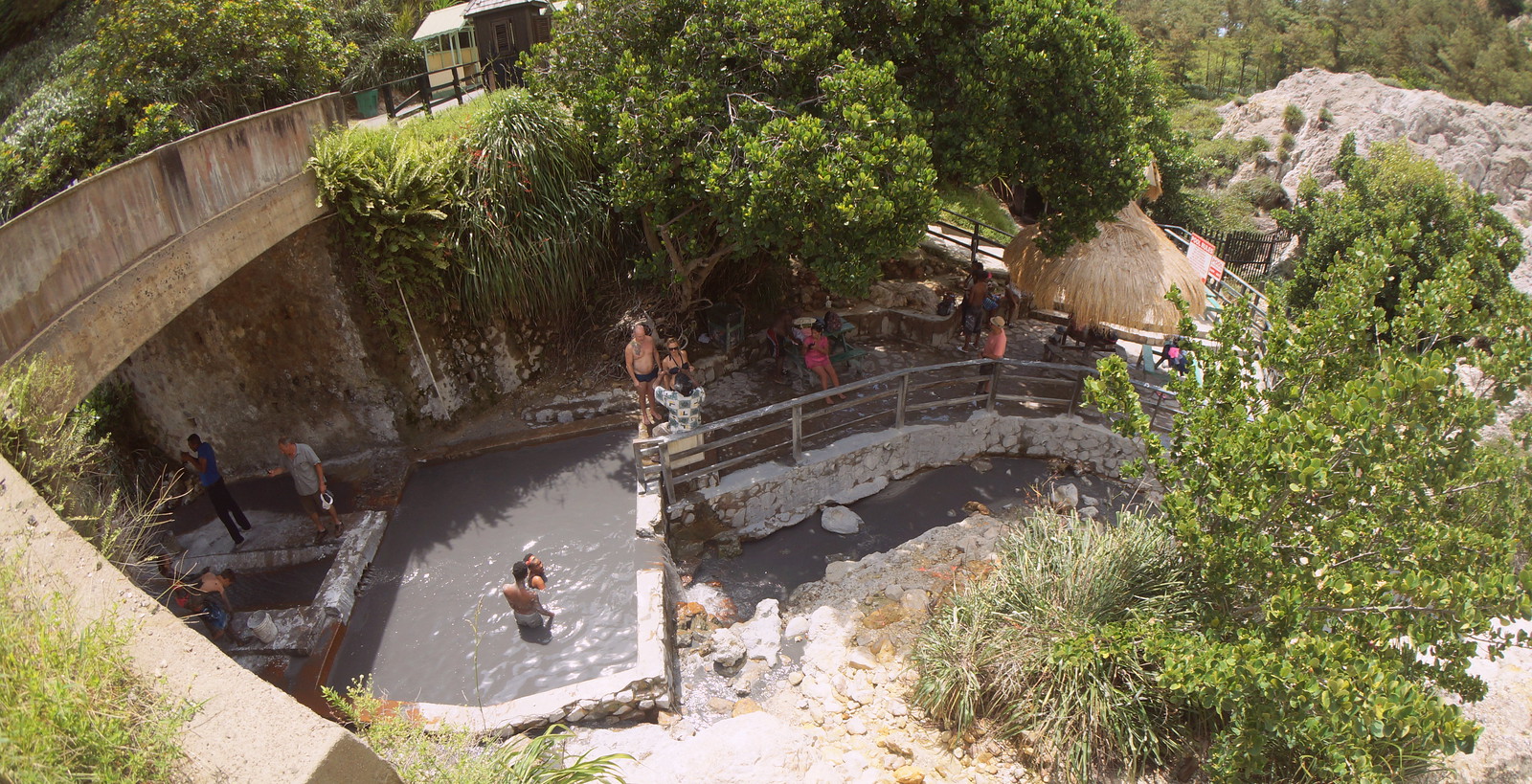 The perfect place for cooling down after the hike and hot spring is at one of the waterfalls in the Soufrière area. This includes Superman Waterfall, named for the eponymous superhero who flew here from the Fortress of Solitude to pick flowers for Lois Lane in the 1980 movie Superman II. This requires a short hike, but on the trail is a splendid view of Mount Gimie, the highest mountain in Saint Lucia. Easier to get to is Toraille Waterfall, a fifty foot drop that cascades into a small swimming hole. Soufrière Bay is also home to a beautiful beach that is far less touristy than Marigot Bay or any of the more popular beaches on the northern part of the island. 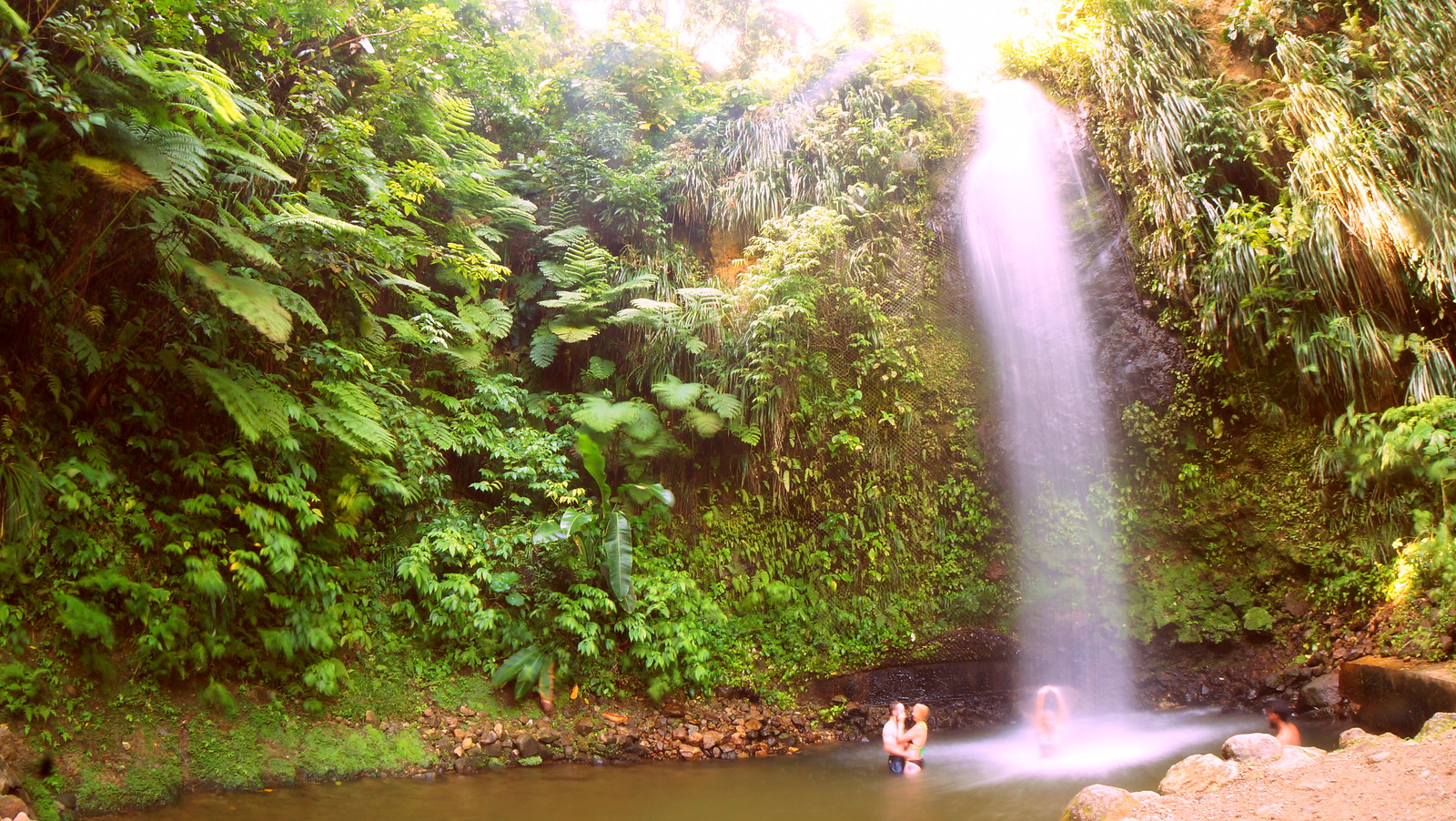 Finally! Looking at the town of Soufriere, seeing the Caribbean Sea and the two Pitons in the distance while sipping on an ice cold Piton Beer; The perfect way to end a day in Saint Lucia!

Our island tour of Saint Lucia was sponsored by Real Saint Lucia Tours, a locally owned company that provides world-class experiences for celebrities, CEOS, VIPS, and other adventure travelers

Contact them to plan your perfect Saint Lucia trip!

The Wonderful World of Winter Beer