Due to its rustic nature and reputation as an unspoilt paradise, Dominica is often referred to as the Nature Island of the Caribbean. Unlike other countries in the region that use all-inclusive resorts and beautiful beaches to lure visitors, Dominica relies on its natural appeal as an eco-destination. Many of the top things to do in Dominica involve trekking to a popular outdoor attraction. These include The Boiling Lake, a flooded fumarole that is the second largest hot lake on the planet, or Emerald Pool, the plunge pool of a forty foot waterfall that reflects the dense jungle foliage that surrounds it. Many of these attractions are linked via the Waitukubuli National Trail, a series of connected footpaths running from north to south that spans the length of the island. 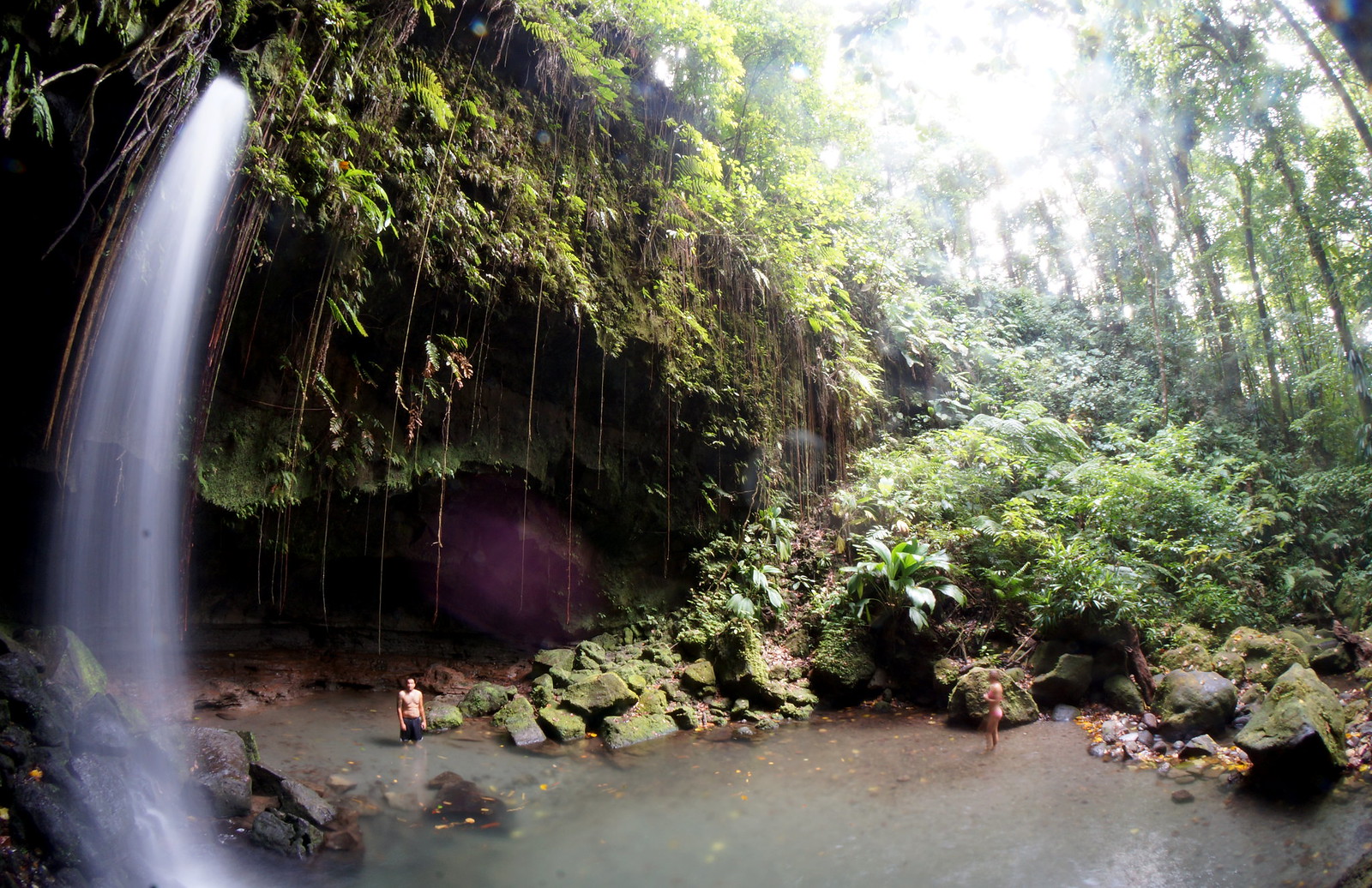 The eco-attractions of Dominica don’t end at the shoreline. The same geothermal activity responsible for the boiling lake and many hot springs in Dominica means that small gas bubbles continuously rise from the seafloor at places like Champagne Beach and Soufriere Bay. This means that the south west coast of Dominica is among the most interesting places for snorkeling in the Caribbean. Additionally, Dominica is also known as the whale watching capital of the Caribbean since it is one of the only places in the world where Sperm Whales reside for the entire year. Due to this, the island is home to the Dominica Sperm Whale Project, the largest sperm whale research program in the world, responsible for compiling detailed behavioral histories of individuals, knowledge of calves from the moment of birth, and knowledge of family groups Beyond sperm whales, several species of cetacean call the waters around Dominica their home, including humpback whales, melon-headed whales, and many types of dolphin. 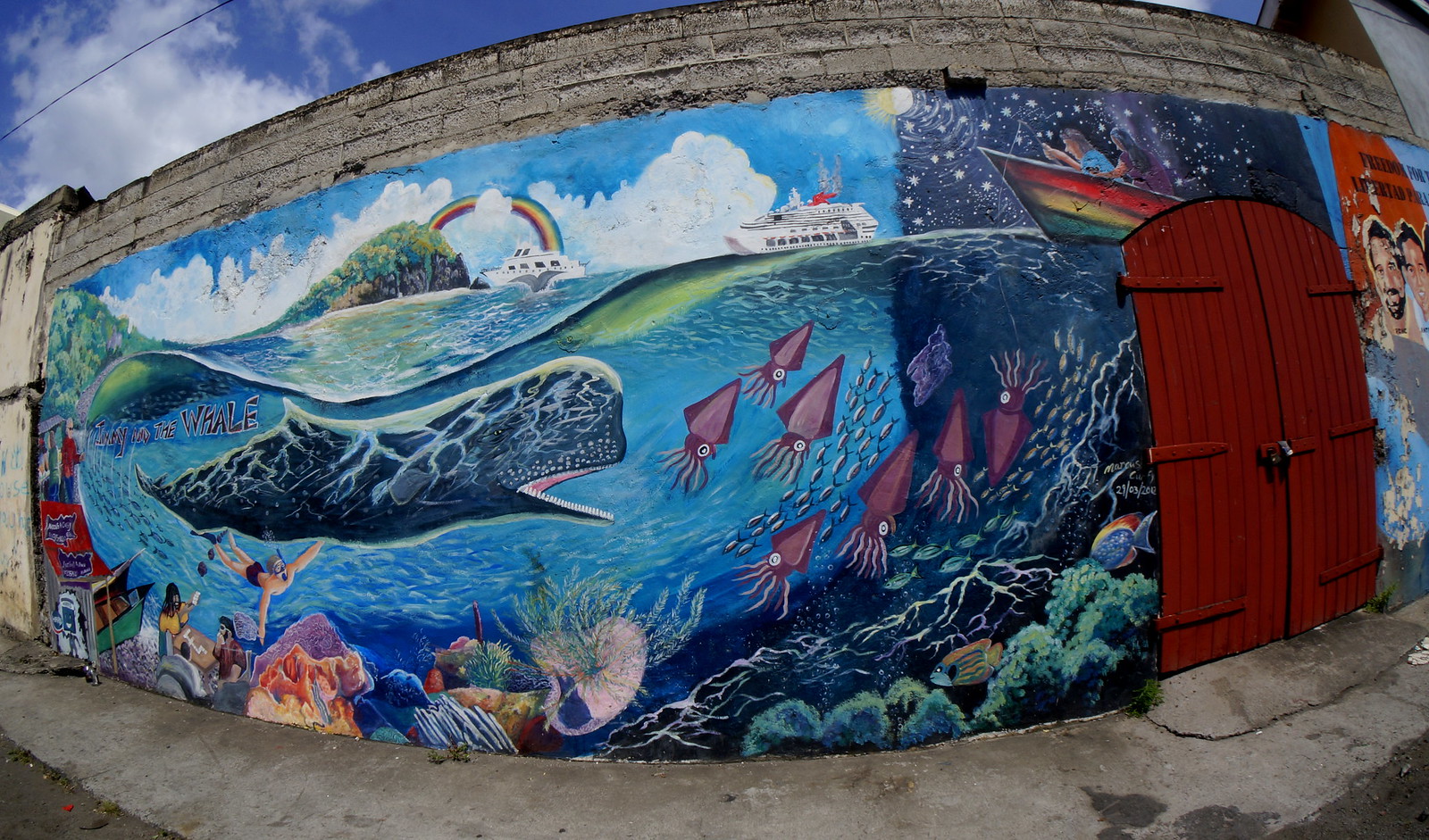 Among them is the Anchorage Hotel and Whale-Watching Center, a family run business that has pioneered the whale-watching industry in the West Indies. The hotel offers Scuba diving lessons, services for boaters, and twice weekly whale watching tours. 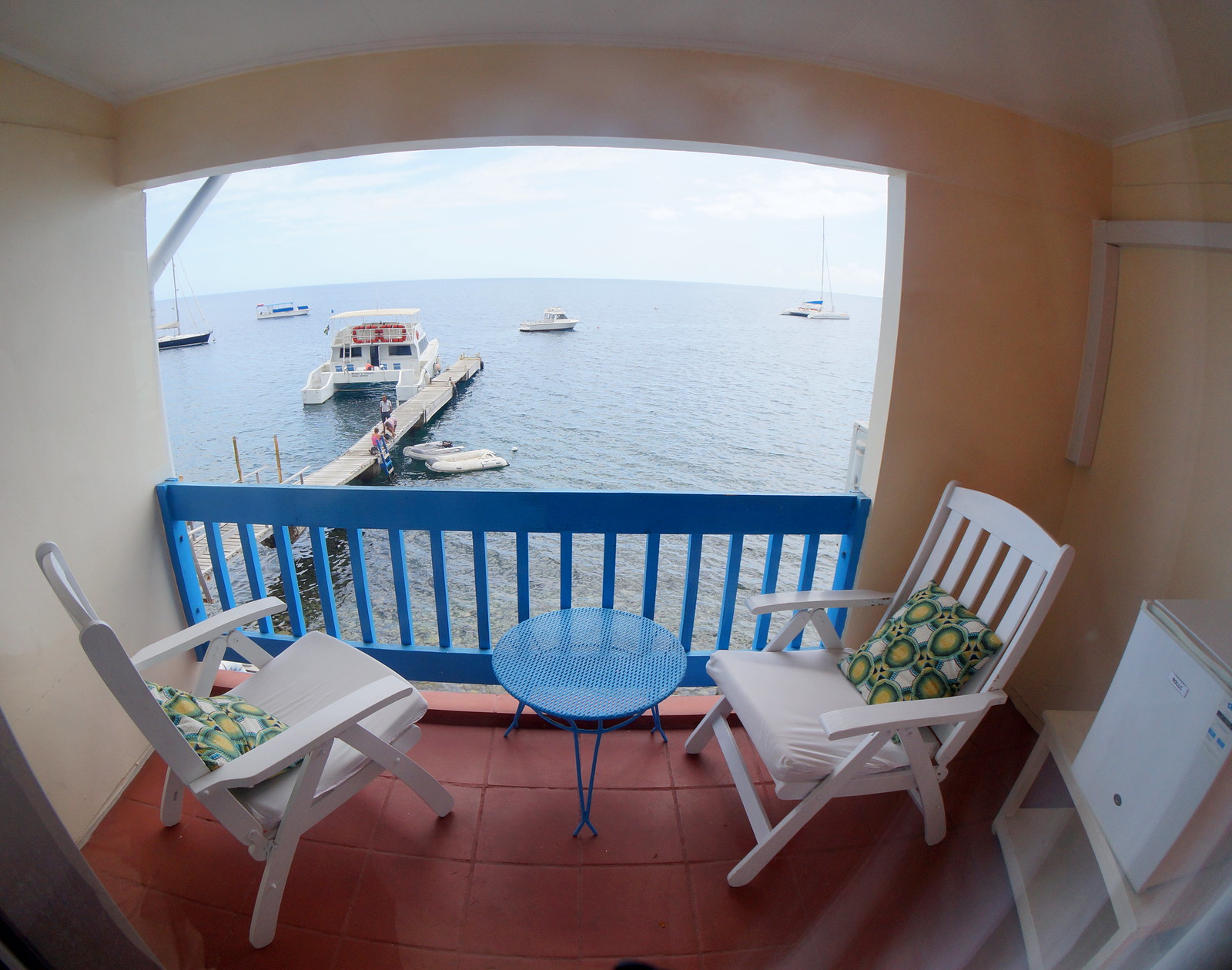 Before departing on the whale watching cruise, a briefing is quickly done near to the mounted skeleton of a sperm whale that beached herself in Thibaud Bay in North Eastern Dominica in 2001. The whale was buried soon after, but in 2004 the bones were recovered, cleaned, and then carefully put back together to be housed at the Anchorage Marine Mammal Interpretation Center. 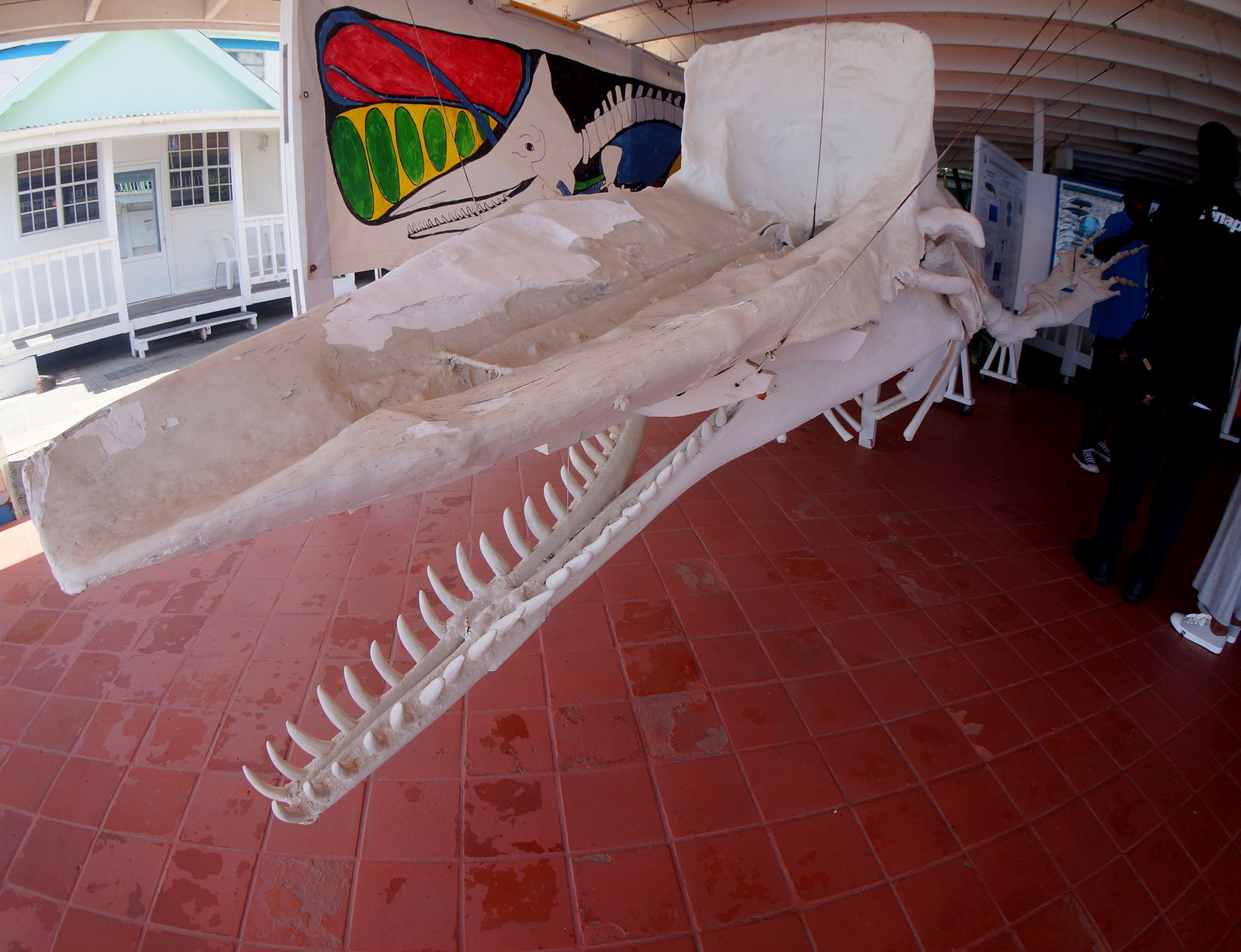 Shortly after leaving harbor, a small school of dolphins began to leap playfully just ahead of the boat’s bow. However, they disappeared before they could be brought into focus for a picture. At several points in the long journey into the open Atlantic Ocean, the crew would stop the vessel to listen for whales communicating with each other by using a hydrometer. This underwater microphone can pick up the clicking noise made by most whales so that the skipper will get a better idea of what direction to steer the boat. Unfortunately, we didn’t hear anything!

At several points in our long journey into the open Atlantic Ocean, the crew would stop the vessel to listen for whales communicating with each other by using a hydrometer. This underwater microphone can pick up the clicking noise made by most whales so that the skipper will get a better idea of what direction to steer the boat. Unfortunately, we didn’t hear anything! 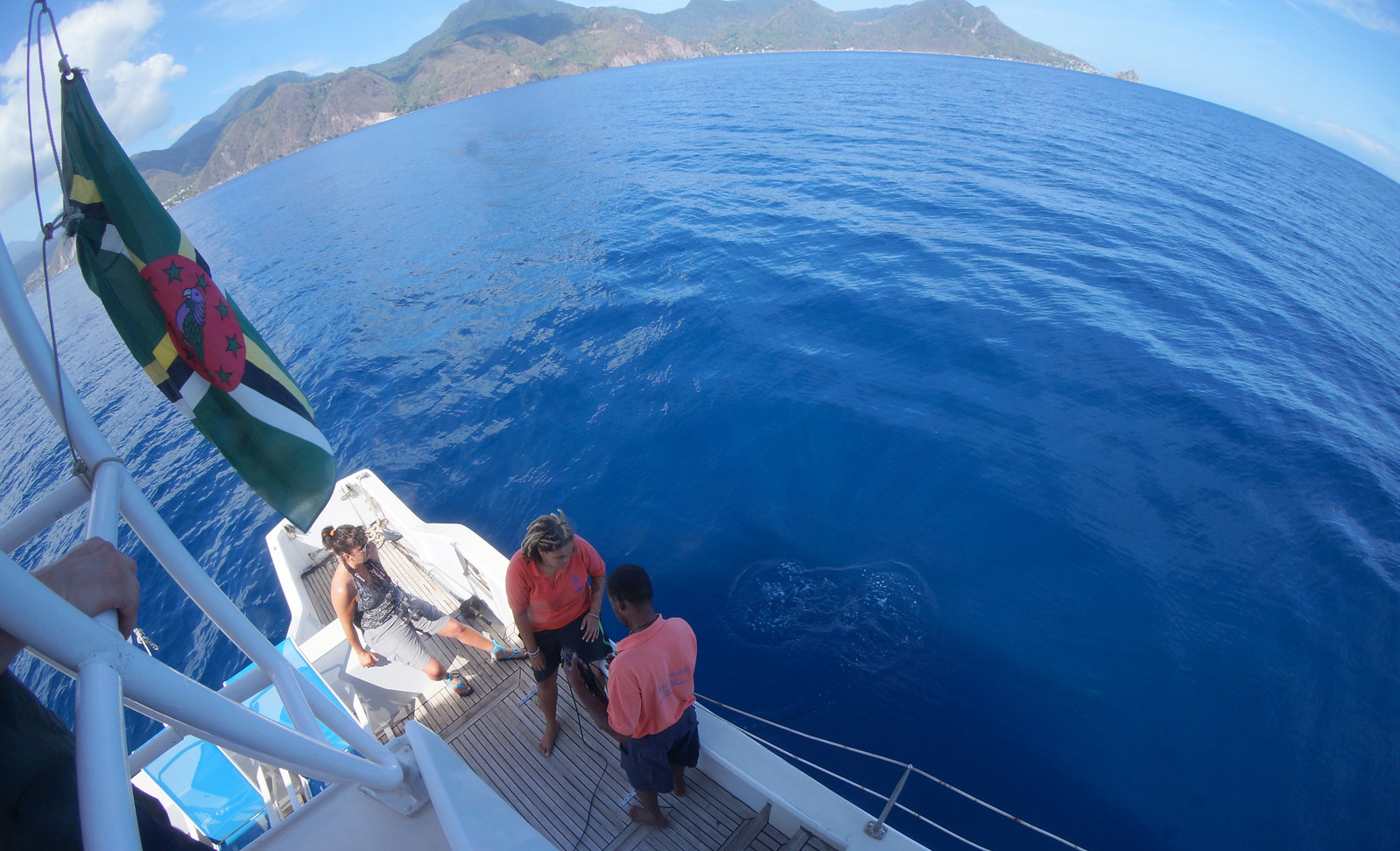 As we sailed further into the vast ocean, we were treated to a view of the entire island of Dominica from its northern point to the most southern point, but we still can’t see any whales. Eventually everyone in the boat has their eyes peeled, constantly scanning the horizon in hopes of seeing a few fins or a spout that signifies a whale exhaling. Finally, a short black fin is seen briefly emerging from some waves in the distance. The crew is alerted and everyone began searching the seas in that direction hoping to catch another glimpse. 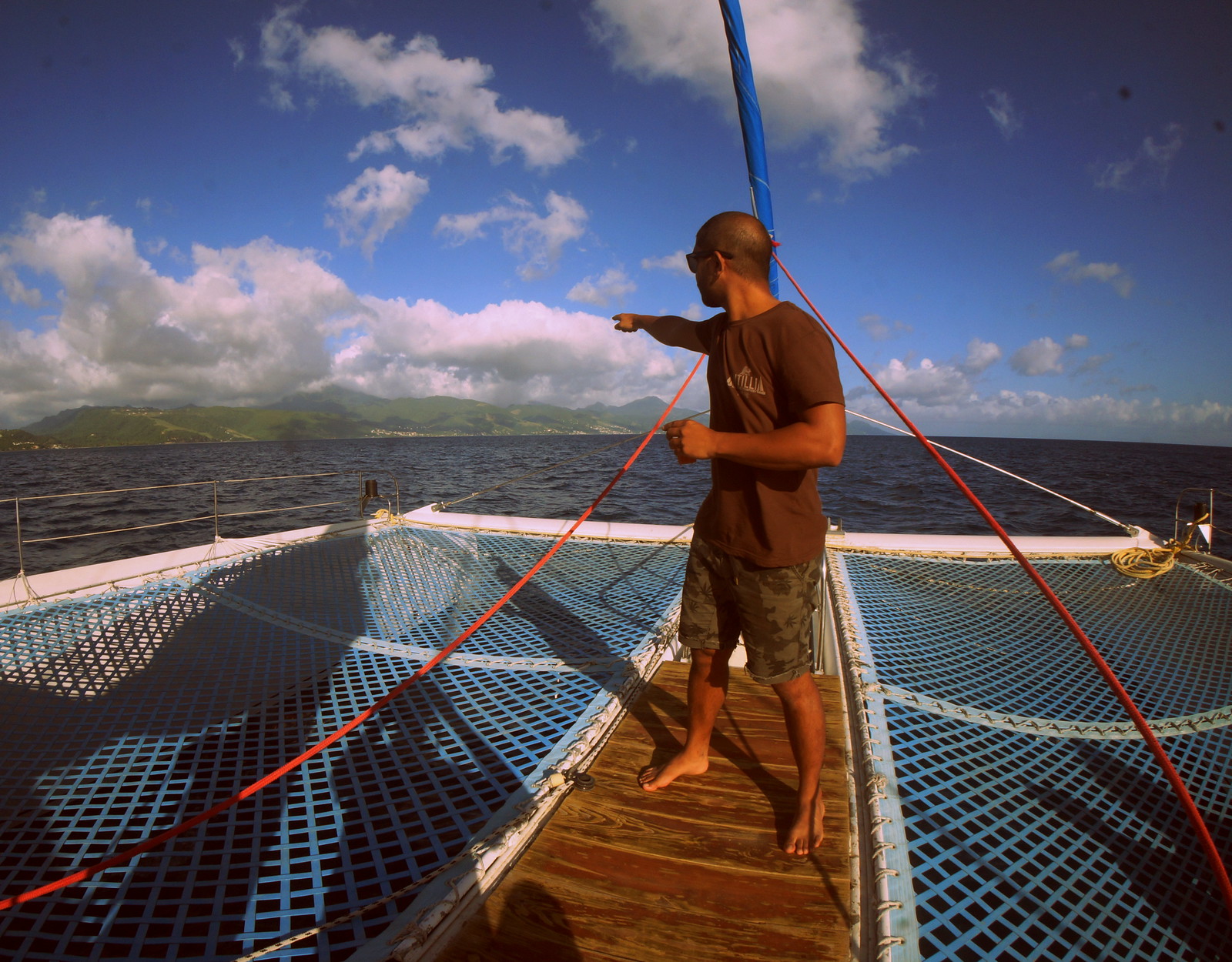 After what seems like forever the fin emerges from the water again. This sighting brings some good news and some bad news.

The good news is that although it was from a distance we managed to see the second species of whale for the day. The bad news is that these were either killer whales, or their more elusive distant cousin the false-killer whale. These are the apex predators of the ocean, and have been known to hunt large sea creatures like sharks or sea lions. Pods of orcas are capable of killing blue whales, the largest animal to have ever lived. Other whales usually dive deep and limit communication with each other to avoid detection by orcas. That meant that seeing any more whales just became extremely unlikely.

A Craft Beer Crawl in North Side Chicago