Across the United States of America, areas with unexplored wilderness and long-standing legends about undocumented creatures often have a local culture centered around cryptids. Montana is known for Bigfoot sightings that have spanned centuries, while Flathead Lake, the state’s largest body of water is reputedly the home of a Lake Monster.

Florida is similar. A primate similar to the sasquatch known as the swamp ape is said to inhabit the state’s vast wetlands, while in the waters surrounding the peninsula, giant sea monsters like the lusca and kraken supposedly lurk. Over the course of centuries, these sea monsters have found their way into the maritime folklore of sailors all across the Caribbean. From Florida all the way to Trinidad, these creatures served as both entertainment and inspiration for seafarers. It was in the spirit of entertainment and inspiration that Coppertail Brewing Company in Tampa was born. 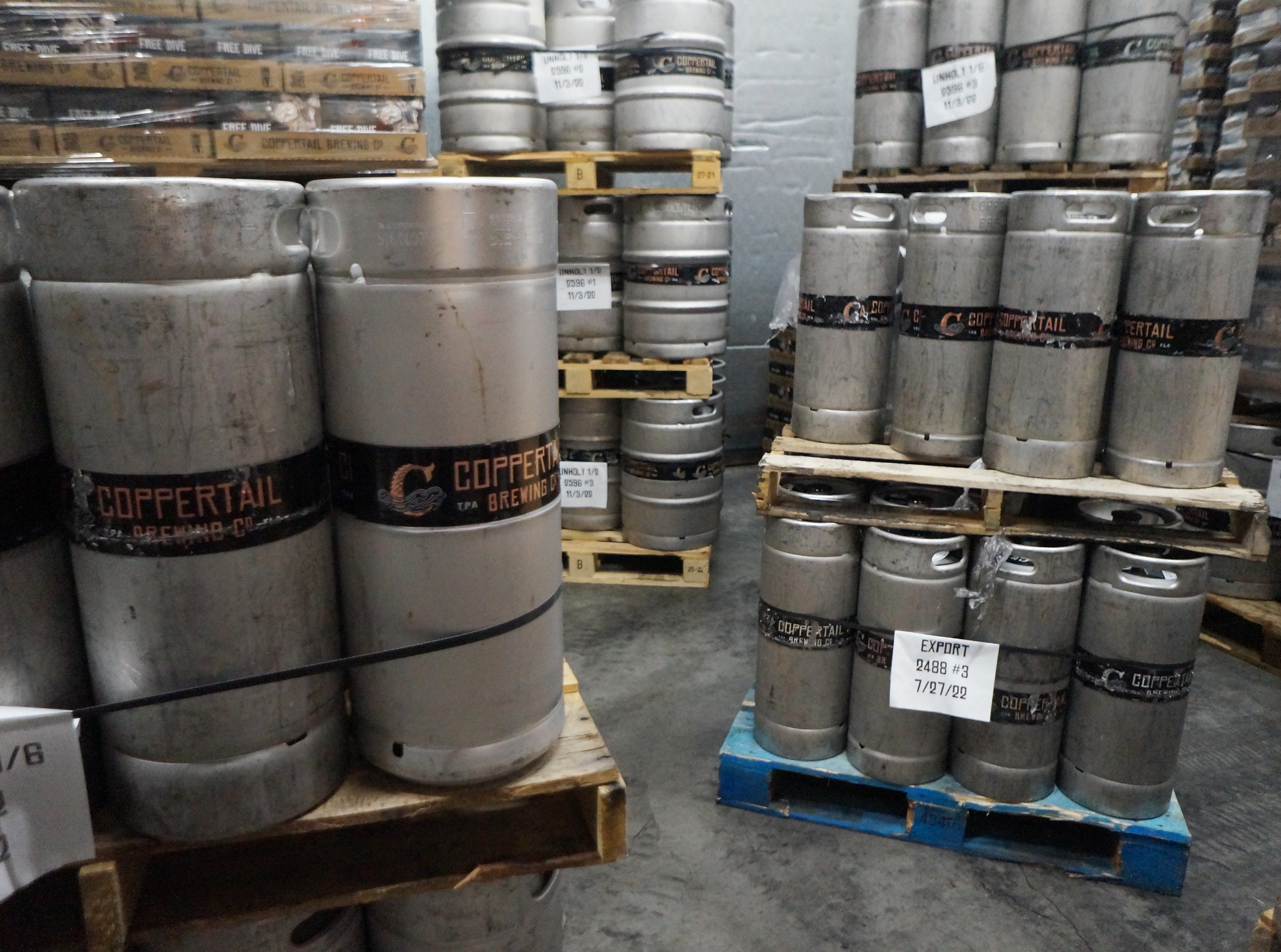 Kegs of Beer at Coppertail

The name of the brewery comes from the moniker given to a large creature covered in glinting scales that the founder’s daughter saw slinking beneath the waters of Tampa Bay when she was five years old. The quest to discover this mythical, metallic tailed monster serves as inspiration for the beer. The beer is marketed along the familiar trope of oceanside enjoyment employed by other Florida breweries like Veza Sur in Miami, and the nearby Cigar City Brewing Company. In their take on this trope however, the packaging and beer descriptions take on darker nuances in keeping with the brewery’s cryptid theme.

Dunk is a German-style dark lager with a crisp, malty profile and a dark red hue. The name is an obvious play on the word Dunkelweizen, a German style with a deep burgundy color bordering on black. The box art and story encourages the drinker to forgo the beach and instead take a midnight leap into a swimming hole much as they may opt to forgo a lighter lager and choose this darker one instead. 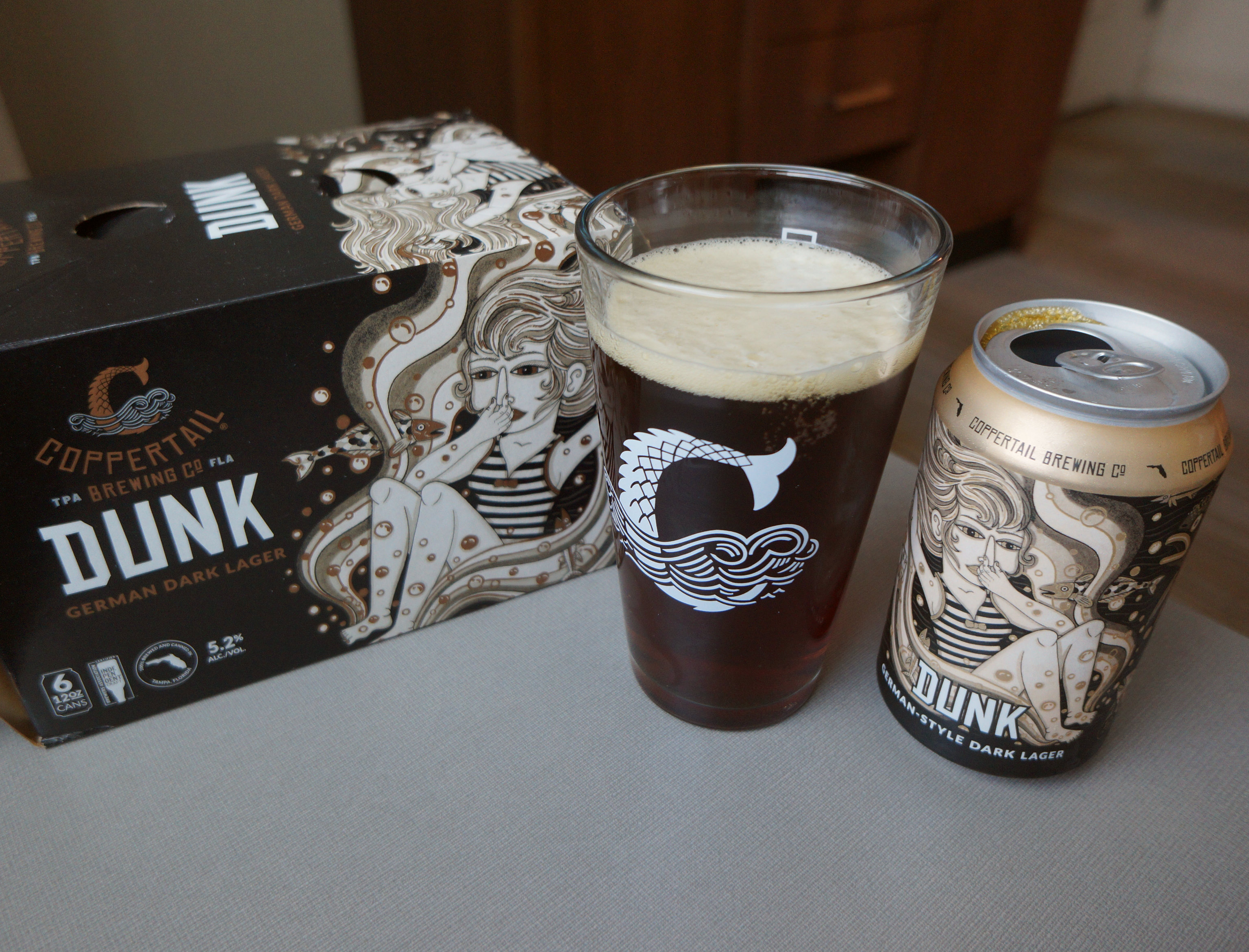 Similar to Dunk but richer and darker is Night Swim, a porter brewed with locally roasted cacao nibs that compliment the chocolate malt typically used in this style of beer. Unlike most dessert porters, Night Swim manages to be decadent but still dry, fulfilling but not too filling. 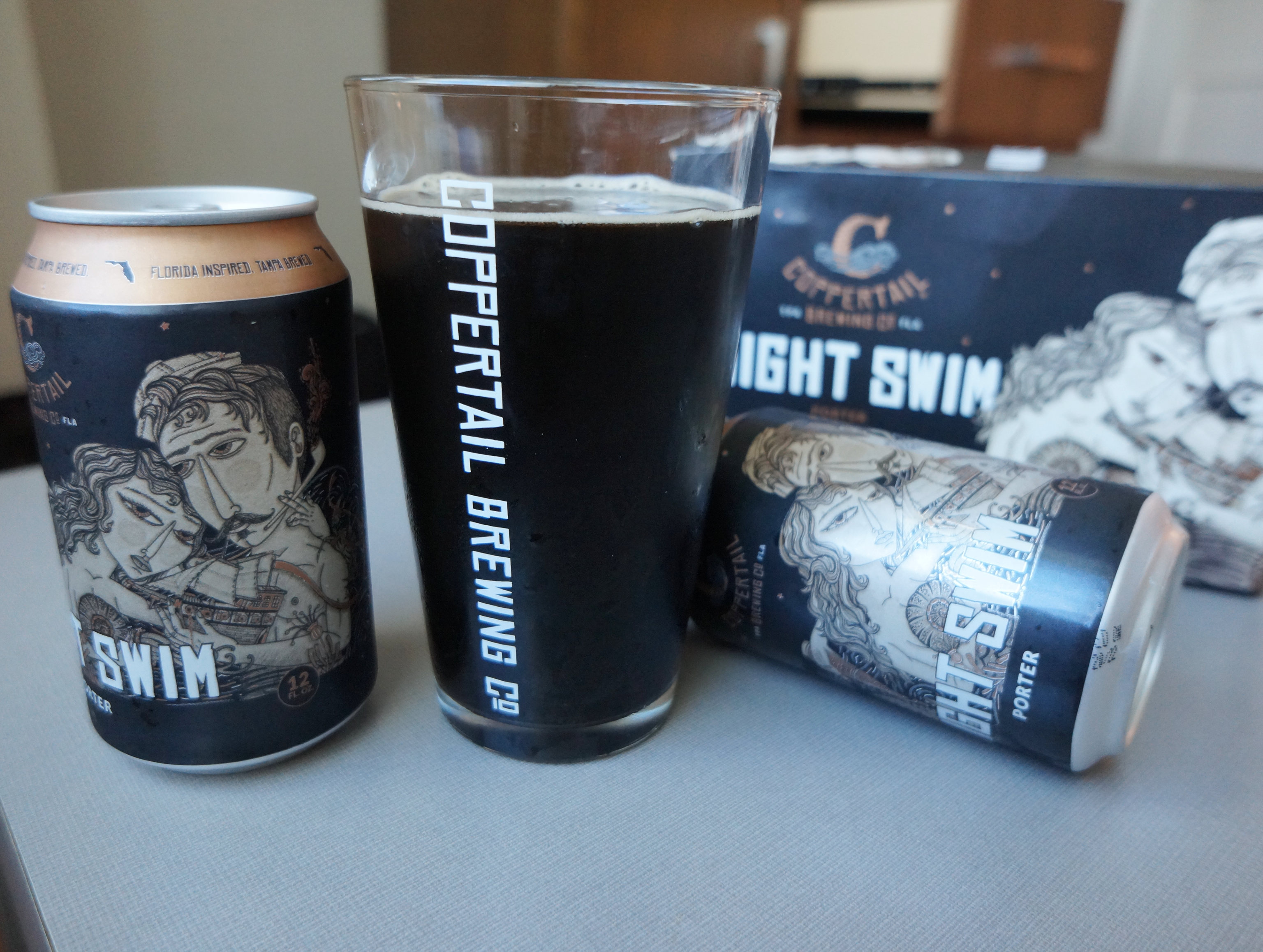 The journey to the deep continues with Free Dive, an IPA that features art depicting a scuba diver sitting on a chair at the bottom of the ocean; seemingly a victim of Davy Jones. Brewed with Citra, Simcoe, Chinook, and Centennial hops, this is one of two India Pale Ales that the company brews throughout the year. The other is a Hazy IPA brewed with oats and a special yeast strain used to keep the beer cloudy. Beyond these two, Coppertail Brewing Company produces the Alpha Hunt IPA series, a line of beer focused on using lesser known hops like Mandarina Bavaria or Idaho 7. Naturally, the can art for the Alpha Hunt series features tall tales about cryptid hunters. 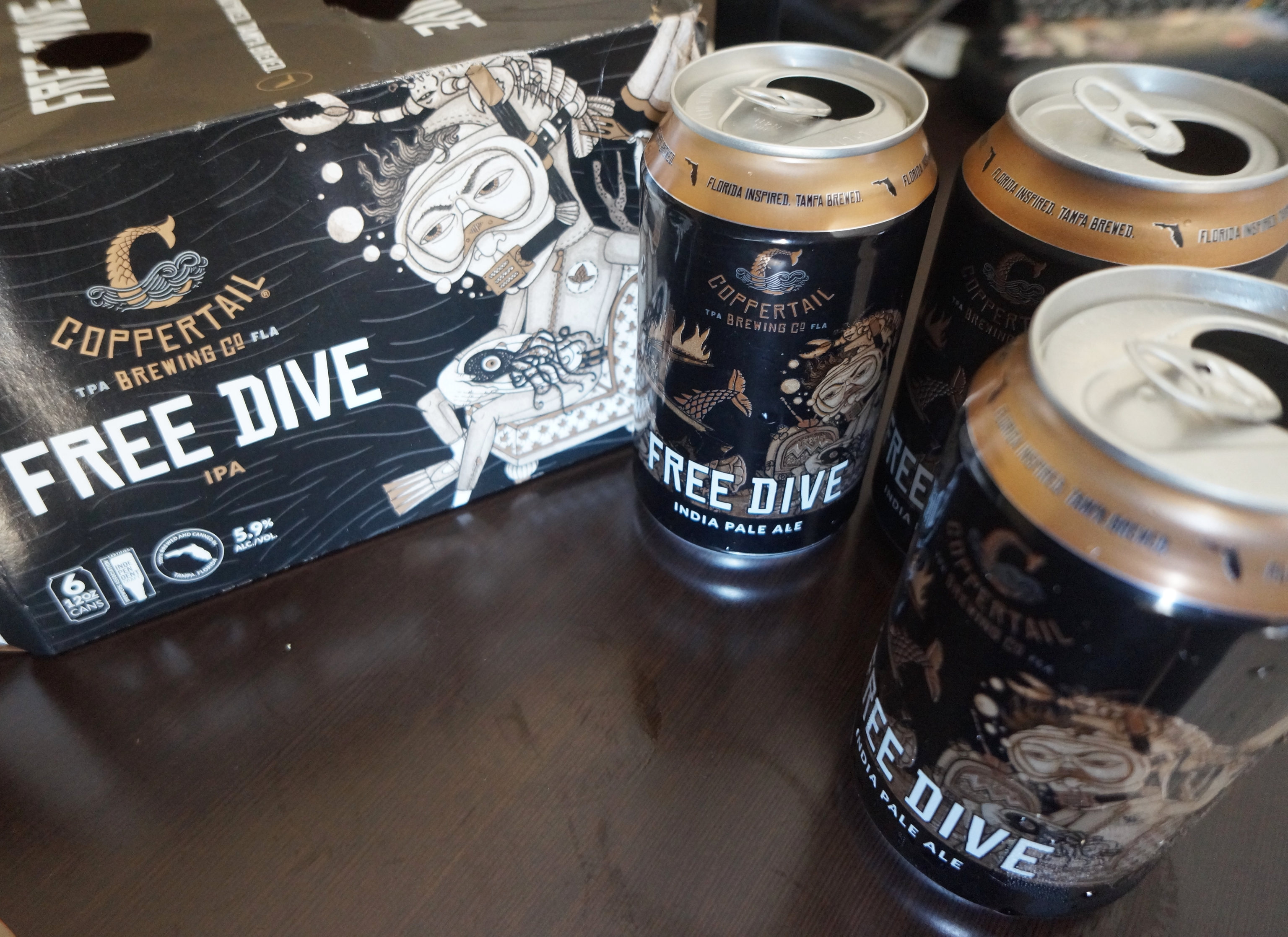 In addition to the four core beer and the range of seasonal products, rare treasures are often packaged for the public. Cryptid is the company’s standard Imperial Stout, but they also boast a version that has been aged in Bourbon barrels with Tahitian vanilla for several months. The natural vanillin present in the oak barrels melds with the vanilla beans in rich sweet notes reminiscent of candied fruit, but the sweetness plays a background role to deeper, darker notes. There is significant heat on every sip which is expected, since this stout clocks in at over fifteen percent alcohol. Toasted oak and roasted malt also come together in smoky notes that add to the intensity of this beer. From the can, liquid cascades down as dark as the deepest ocean trenches where undiscovered marine life might be lurking. The art on the can depicts a mess of tentacles, tails, and sharp teeth, typical of a cryptid sighting when witnesses seem to be unable to agree on what they saw. Barrel Aged Cryptid rivals big name Imperial stouts in fancy bottles, but Coppertail keeps it in a can since bottles are not allowed on Florida beaches. 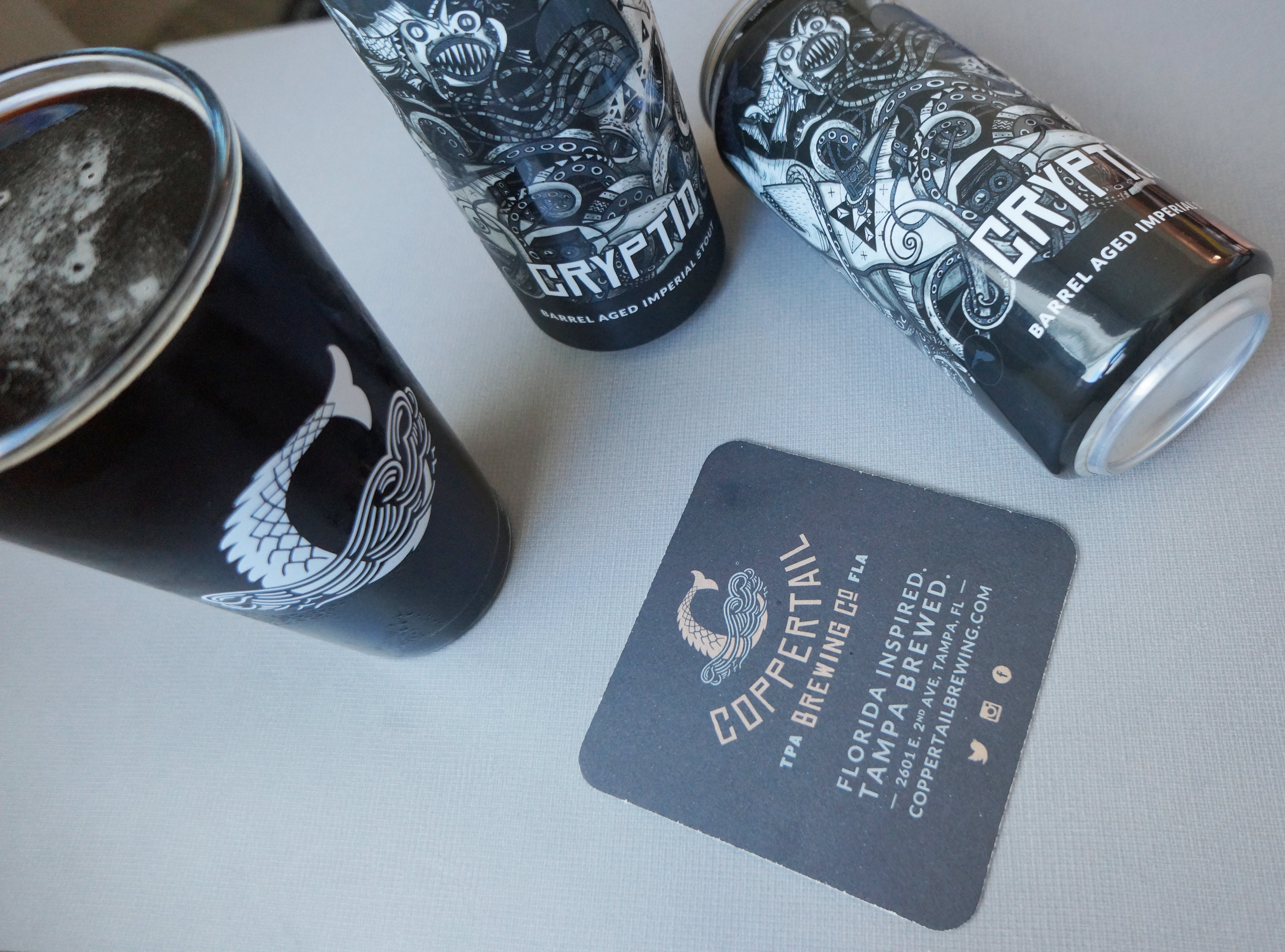 At the actual brewery there is a broad range of beer available beyond what Coppertail typically puts into cans. Among them are several types of Florida Weisse, a cloudy and sour style of beer with syrup made from fresh, local fruit added to the final pour. Most mix at least two fruits and manage to balance the sweetness and tartness of each along with fresh fragment notes that evolve over the course of the beer. Several use fresh berries from Bramble Creek Farms, a small farm that is just a few miles north of the brewery. An example called Lemon Pie balances tart lemon with honey graham crackers and vanilla. It is refreshingly simple and similar to the dessert that it seeks to emulate.

There are also several sessionable lagers. Florida Special is light, crisp, and designed for day drinking. Not much different from Veza Sur’s Latin Lager, it also has the light, funky notes typically found in West Indian Lagers. Old Union is a bit more malt forward and stronger. It’s crisp and grassy, with an apple cider-like aroma with a dry finish. 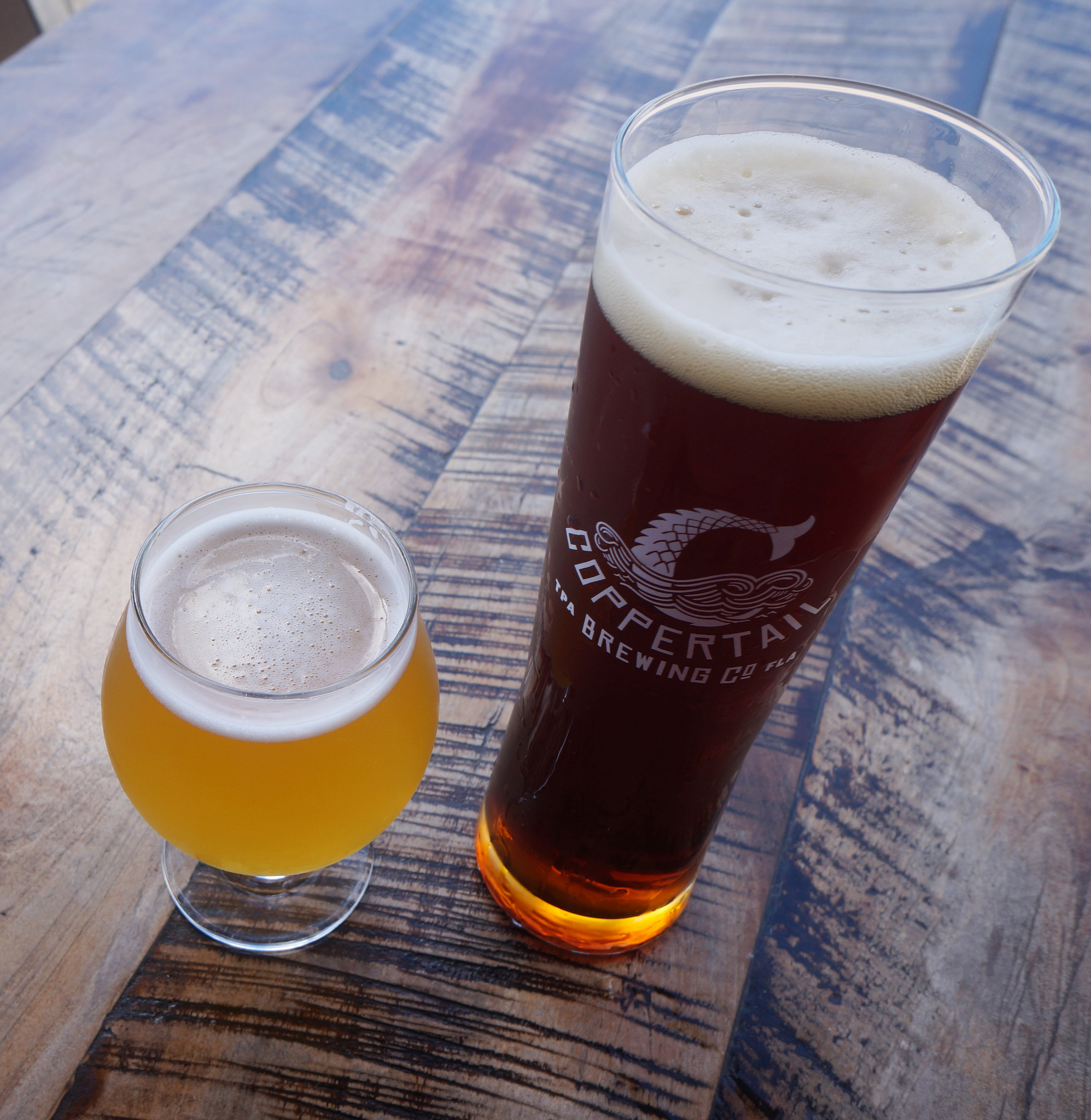 Two of the many Florida Weisse and Lagers on tap

Like many other beer companies, Coppertail Brewing offers brewery tours on weekends. These are the typical brewery tour, where the tour guide talks broadly about grain, water, and hops, but also about what makes Coppertail unique. This includes the history of their building and also their relationships with local sports teams the Tampa Bay Rays and the Tampa Bay Buccaneers. 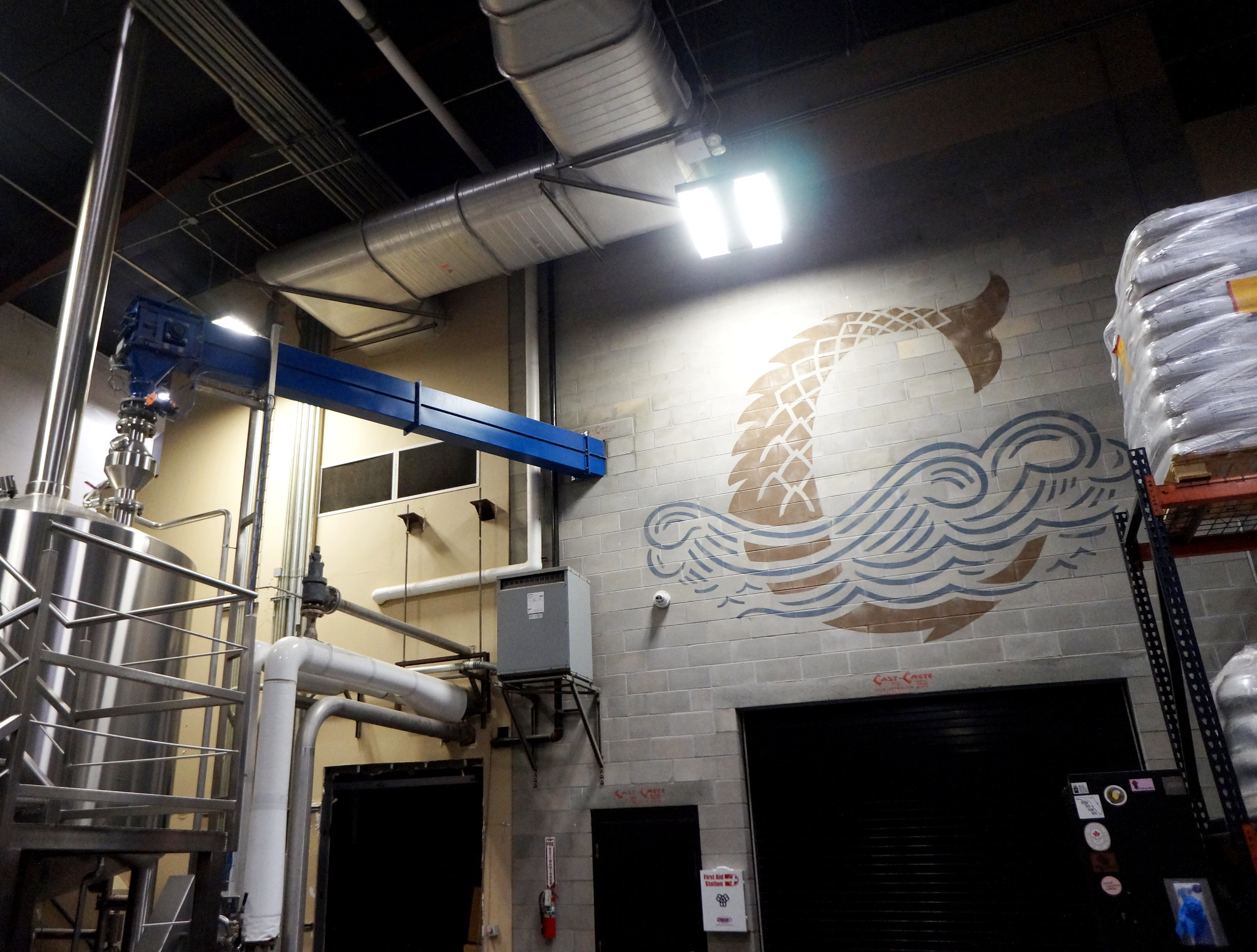 The tour is an opportunity to ask any in-depth questions about any particular beer that is currently on tap because at the end, everyone gets a complimentary beer.

The final tours end in the late afternoon and the previously sun-drenched  outdoor deck is now cool and quiet. It’s the perfect time to enjoy a few more beers into the early evening and then head across to the more nightlife-oriented Ybor City. 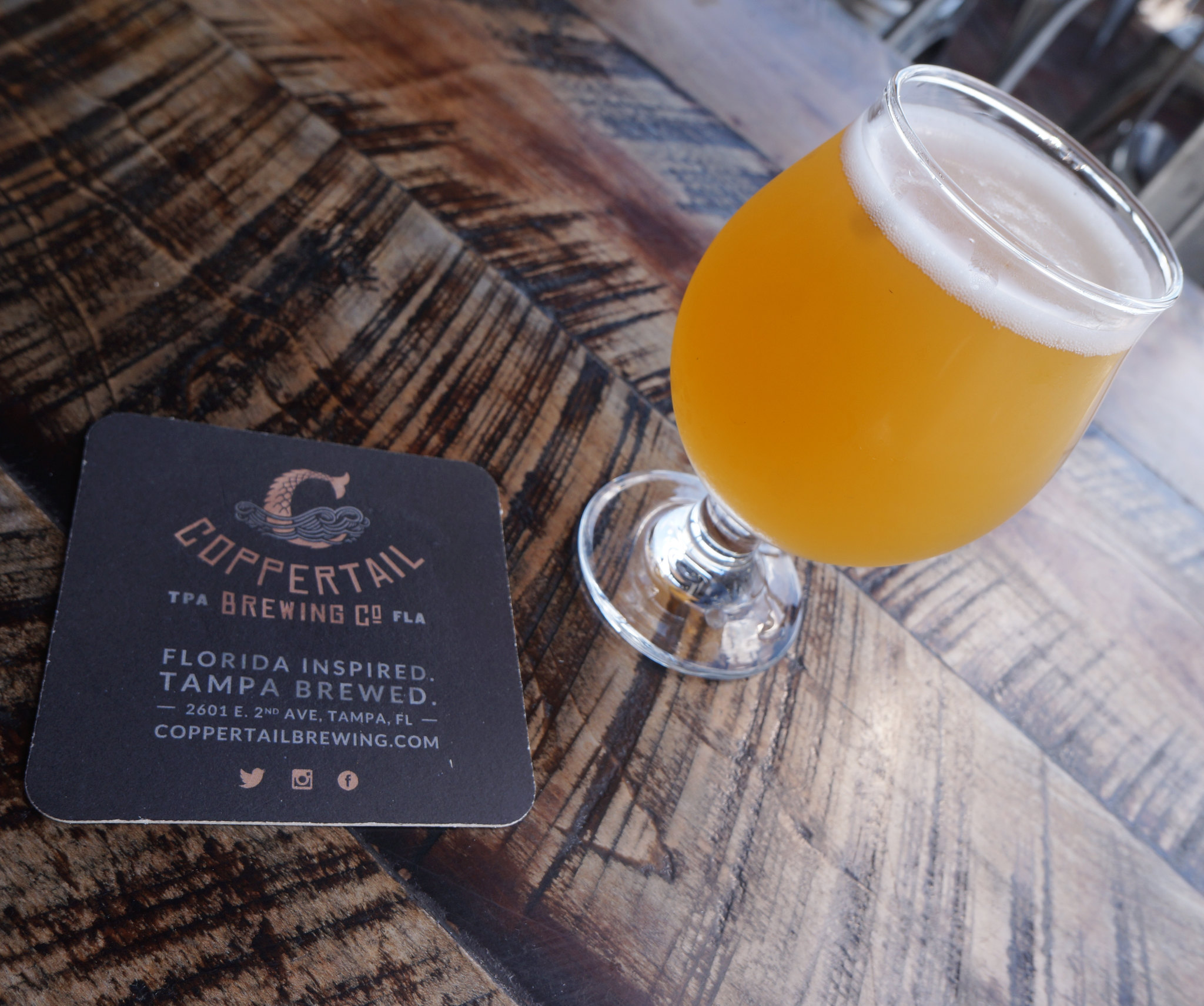 A final Florida Weisse at the Brewery
FacebookTwitterPinterestLinkedinEmail

How To Spend Three Days In Chicago