The culinary culture of the Caribbean and the South-East United States have been intertwined for centuries. The result of this is the food phenomenon sometimes referred to as Floribbean cuisine; a style of cooking that sees traditional American and European fare being strongly influenced by Latin America and the West Indies. An icon of this culinary style, and of Florida food in general is the Cuban sandwich, a humble ham and cheese sandwich influenced by the decades of cultural exchange between Florida and Cuba. A sandwich considered by many to be the quintessential Florida street food.

Miami and Tampa have a friendly rivalry over which city invented the Cuban Sandwich but the reality is that the dish originated in Cuba. According to Felicia LaCalle, a chef and restaurant owner from Tampa; “it’s believed to have been from the Taino culture where they take the cassava bread and what protein they had at the time” to prepare a simple meal. This protein would have come from the prey typically hunted by Amerindians in Cuba, but after the arrival of Europeans it shifted towards meat like pork that was cooked in the barbacoa style. Similarly, as old world crops came to the western hemisphere, bread made with wheat became more common than cassava bread. Over time several types of sandwich became common fare in Cuba, including the Medianoche, a staple of nightlife in Havana during the golden age of the Cuban cocktail. What is now referred to as the Cuban Sandwich was simply one of several sandwiches within Cuba. It only became notable and got a name when Cubans brought it to Florida.

Throughout the 1800s, cigar rollers from Cuba migrated to the Florida Keys to work in the burgeoning Key West cigar industry. By 1888 however, the leading tobacco industry was now in Tampa along with the largest Cuban population in the state. In this same decade, an influx of migrants from the Sicilian village of Santo Stefano Quisquina also began arriving in large numbers. The influence of these Italians can be seen in an important ingredient that differentiates the Tampa Cuban Sandwich from the Miami Cuban Sandwich, but before getting into any discussion of ingredients it is important to begin with the bread.

According to Jeff Houck, the Marketing Manager of the Columbia Restaurant and co-author of The Cuban Sandwich: A History in Layers; “bread is a very integral part of the Cuban sandwich story” so ultimately “bread is the framework for the start of the conversation.” Cuban bread is similar to a French baguette in appearance, but is distinctive due to a palmetto leaf embedded across the length of the loaf before it enters the oven. This practice originated in the Caribbean, where the razor thin palm leaf would be used to score the bread. It also helped the breadmaker to monitor the baking since a burning leaf might mean that an area in the oven is too hot. The marketing manager of La Segunda Central Bakery, David Leon says that the leaf is also important to the character of the loaf; “The dough rises around the leaf, giving the bread flavor” while it allows gas to escape the loaf so that the shape is consistent. La Segunda Bakery has been in existence in Ybor City since 1915. They serve their own Cuban Sandwiches and Latin American pastries and also provide all of the bread used at the institution with the oldest claim to a Cuban Sandwich recipe; the Columbia Restaurant. Taking up an entire city block, this is the oldest restaurant in Florida, and the largest Spanish restaurant in the world. It is now an elegant establishment with tiled murals, fifteen dining rooms, and an indoor fountain but one hundred years ago it was actually a humble cafe known for bootleg liquor and bar fights. 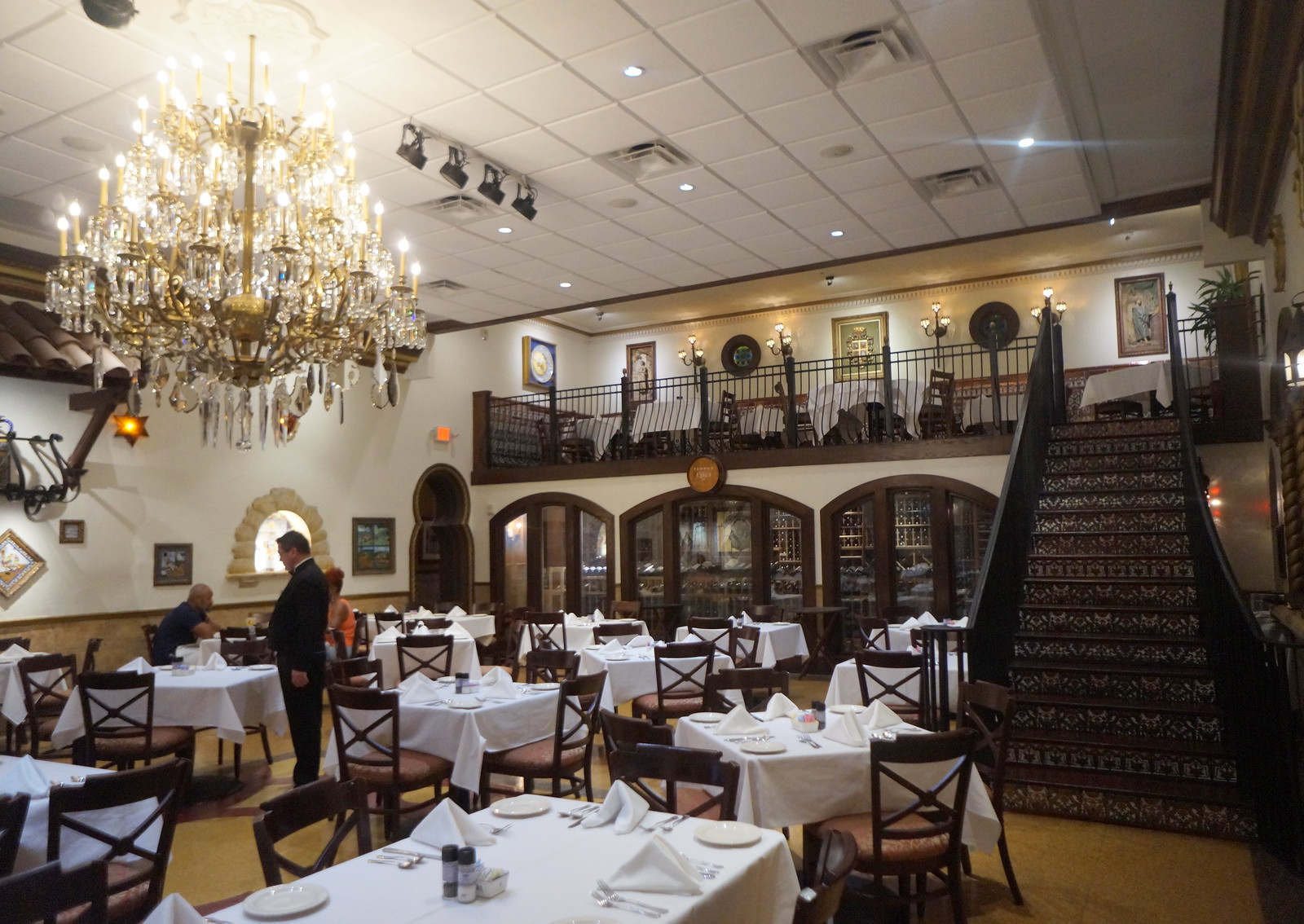 Dining Room at the Columbia Restaurant.

It was as a cafe that they originally served Cuban sandwiches to cigar workers seeking an affordable meal that was easy to eat and not too heavy. The Cuban sandwich at the Columbia Restaurant is made now, just as it was made decades ago. Thinly sliced sweet ham, followed by slices of roasted pork are piled on the bread. This is followed by Genoa salami, and then Swiss cheese. Jeff Houck says that the cheese “works well as a binder, but also as a texture component”. He points out that the salami was likely added to make the sandwich more attractive to Italian cigar rollers, and that The Columbia opts for a brand from Italy with a strong flavor contribution from black peppercorns. To complete the sandwich, two pickles are placed on top, mustard is slathered on the bread, and the sandwich is heated until crisp. Andrea Gonzmart-Williams, the fifth-generation owner of the Columbia Restaurant sees the ingredients of the Tampa Cuban sandwich as representing the immigrants who built the city. Ham, lechon, and salami represent the Spanish, Cubans, and Italians respectively while the pickles and mustard are the contribution of the Germans. 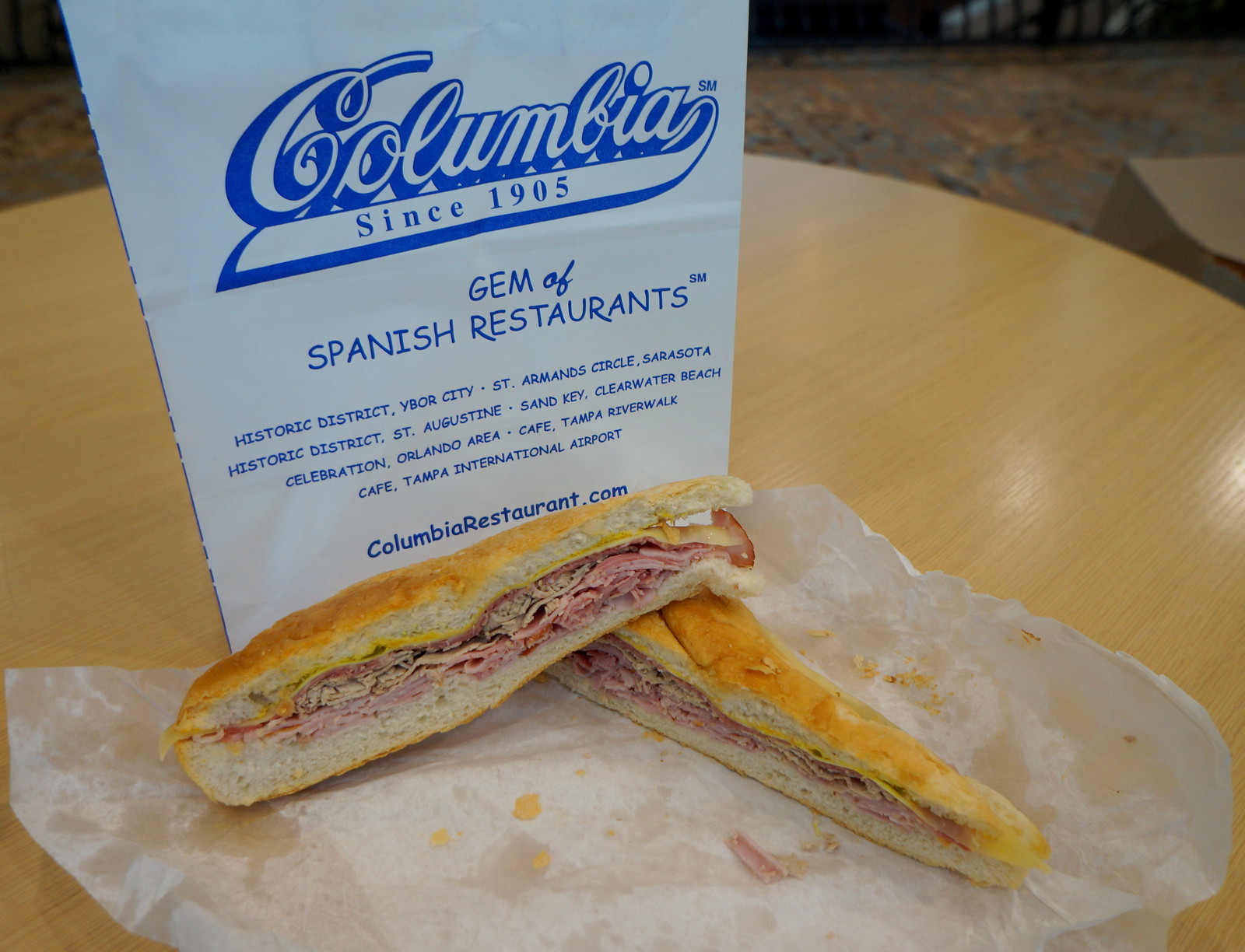 The Cuban Sandwich from the Columbia Restaurant.

Residents of Miami are willing to accept that the oldest claim to the Cuban sandwich belongs to Tampa, but they consider the use of salami to be inauthentic to Cuban culture. As the former mayor of Miami Tomás Regalado once put it; “salami is for pizza.”

Miami was still mostly mangrove swamp when the first Cuban sandwiches were being made in Tampa. The modern metropolis that exists today is actually a relatively recent development. Similarly, the growth of the Cuban community in Miami only happened at the end of the 1950s with the influx of political exiles fleeing Castro’s rise to power followed by  a continuous trickle of others fleeing the communist dictatorship. Because of this more recent immigration and influence, enthusiasts of the Miami Cuban sandwich believe that their version better represents contemporary Cuban culinary traditions, and they consider Little Havana in Miami to be the Cuban Sandwich capital of the country. This neighborhood in south Miami developed its Cuban character in the early 1970s and is home to Latin American landmarks like Domino Park, the Bay of Pigs Memorial, and several Cuban cafes. 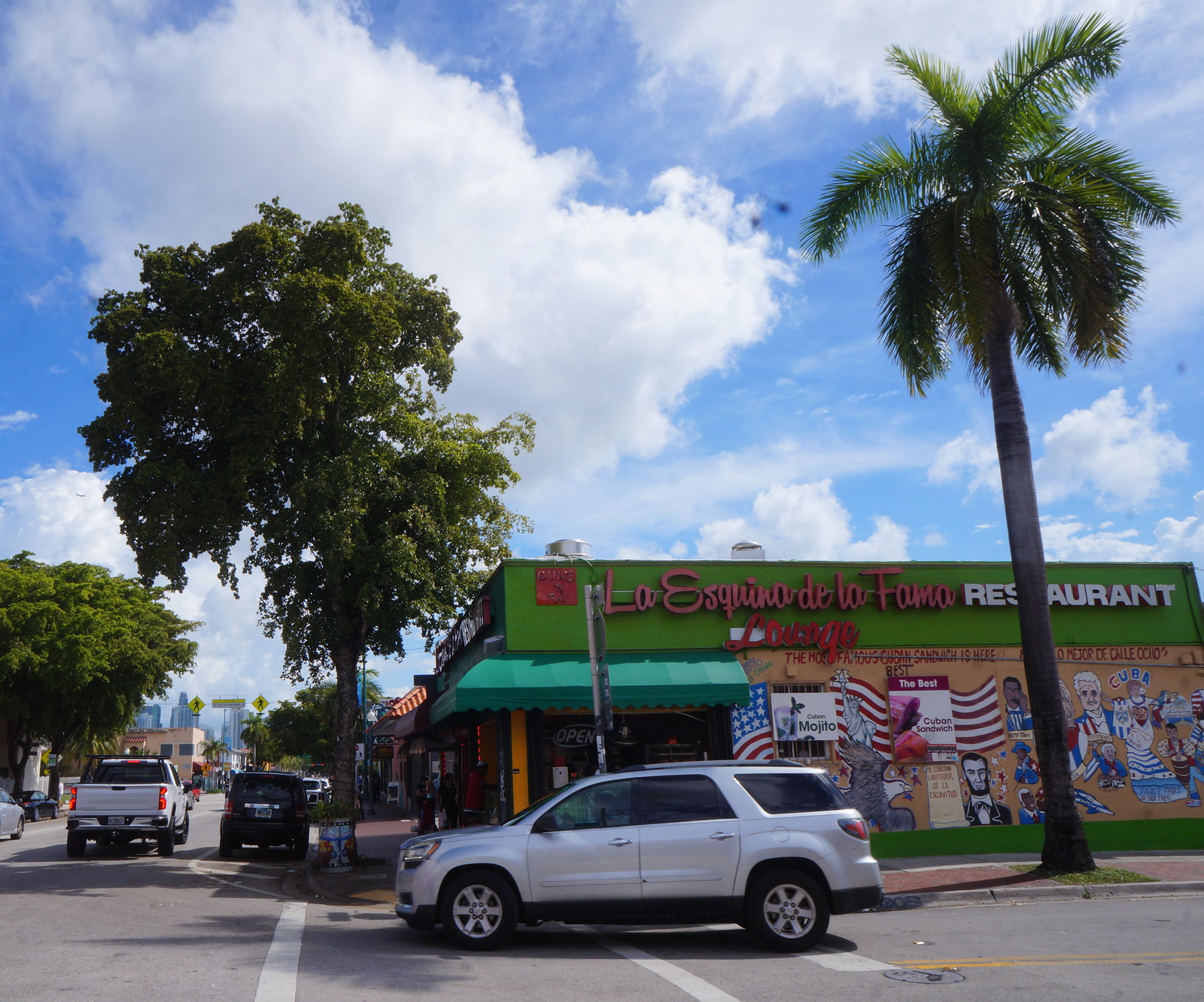 A street corner in Little Havana.

The earliest Cuban sandwiches made in Little Havana were actually crafted by Cuban chefs. Among these cafeterias was the Versailles Restaurant, founded in 1971 and considered to be the most famous Cuban restaurant in the world. The original Versailles restaurant on Calle Ocho has always been a gathering place for the Cuban community in Miami and remains a cultural landmark in the city. There is indoor dining, but customers commonly order through La Ventanita; a small window to the street where coffee and pastries could be quickly served. Felipe Valls Senior, the founder of Versailles Restaurant came up with the concept of the Ventanita as a way to introduce air conditioning to Miami restaurants but still keep coffee sales convenient for customers. Journalist Carlos Frías says that Ventanitas are “something that had never existed in Cuba but has come to signify Miami’s round-the-clock social culture.” Bárbara Cruz, a researcher at the University of South Florida, and co-author of The Cuban Sandwich: A History in Layers remembers her earliest experience of this street food; ”it was in Calle Ocho in Little Havana. We would go to a window, La Ventanita.” She recalls her father ordering a colada of concentrated coffee to share with friends, and she would have a Cuban sandwich that was ”crispy on the outside, flavors fused among the layers, warm and filling.” Today, millions of tourists visit Little Havana every year to experience such a sandwich.

A signature of the Miami Cuban sandwich, other than the lack of salami, is that it is slathered in butter or lard and toasted in a press. In the movie Chef, where Cuban sandwiches play a major role in moving the plot forward, the main character shows his son how to butter and press the sandwich until the cheese is melted and the bread is golden brown. He tells him “this is the most important part. This is what makes it a Cubano.” Many restaurants also marinate their pork in mojo seasoning for longer than in Tampa. This is because they can’t rely on the salami to contribute flavor, but it is also reflective of the culinary culture of Miami where influences come from places like Colombia and the Dominican Republic. The different methods of preparing lechon from different parts of Latin America all come together in the culinary melting pot that is Miami.

Several restaurants in Miami also seek to elevate the Cuban sandwich experience. Sanguich de Miami, a restaurant included in the 2022 Michelin Guide makes their own ham and lechon in-house by marinating pork butt for several days. At Ball and Chain, a bar and lounge that was a saloon when Calle Ocho was still a dirt road, a quality Cuban sandwich is also served. Sweet ham slow cooked pork is piled high on Cuban bread, and a house-made aioli mustard that compliments the nuttiness of the Swiss cheese is slathered on top. The entire sandwich is then pressed, toasted and served alongside thin cut fries. Their bar is the perfect place to enjoy a Cuban sandwich and some cocktails and reflect on the history of the Cuban sandwich. 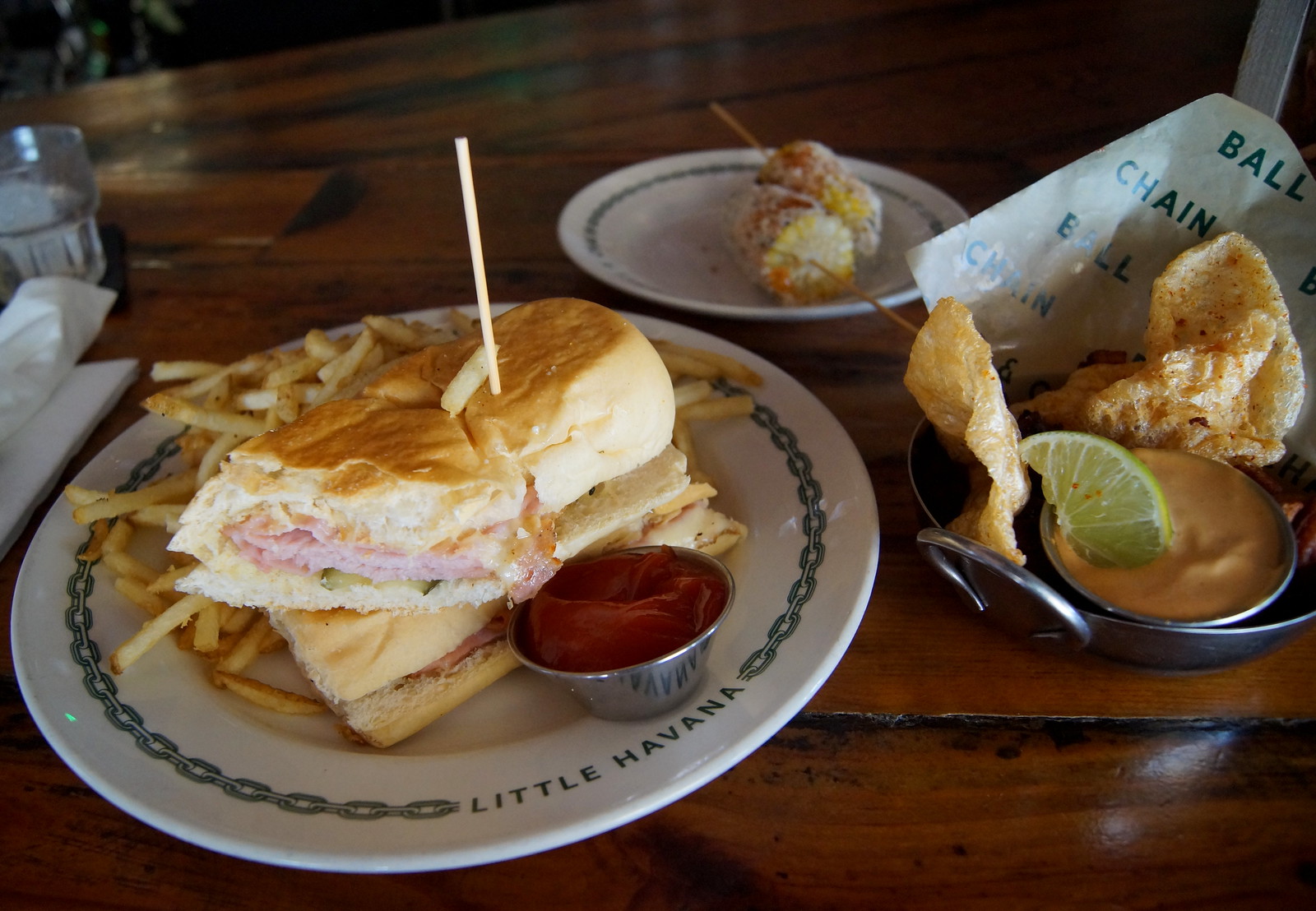 Cuban Sandwich and Fries from Ball and Chain.

A Stout for All Seasons