There are many ways to travel across the United States of America, and the ideal way for you depends on your personal travel style. If time is a priority then air travel is the best option. For those seeking spontaneity and the ability to move at your own speed, a road trip is ideal. If you want to relax, see North America’s scenic side and have the option of stopping off in a few cities; Traveling across America by Amtrak Train is a great option.

Amtrak Trains operate a route system that spans over 21,000 miles, passing through over 500 destinations. Every Amtrak Route has its own unique charms as they each pass through a different part of America. The Southwest Chief travels from Los Angeles to Chicago with stops in New Mexico, Arizona, and Missouri. Along the way the train intersects with the legendary Route 66, and there is an opportunity to explore the Grand Canyon. On the other side of the country, the Silver Meteor starts in Miami and heads north along America’s East Coast until it arrives in New York City. Then there is the Empire Builder, a journey that starts along the shores of Lake Michigan and ends at the shores of the Pacific Ocean after a long westward journey. A journey often considered to be among the most beautiful train trips in North America.

Boarding for Amtrak begins at Chicago’s Union Station, a historic, hundred year old station just outside the Chicago Loop. The Chicago Loop is the commercial hub of the city, and home to attractions like Willis Tower, the Chicago Bean, and Buckingham Fountain. The location of Union Station means that it’s easy to visit the many Chicago attractions north of the Field Museum and south of Navy Pier before boarding the Empire Builder. 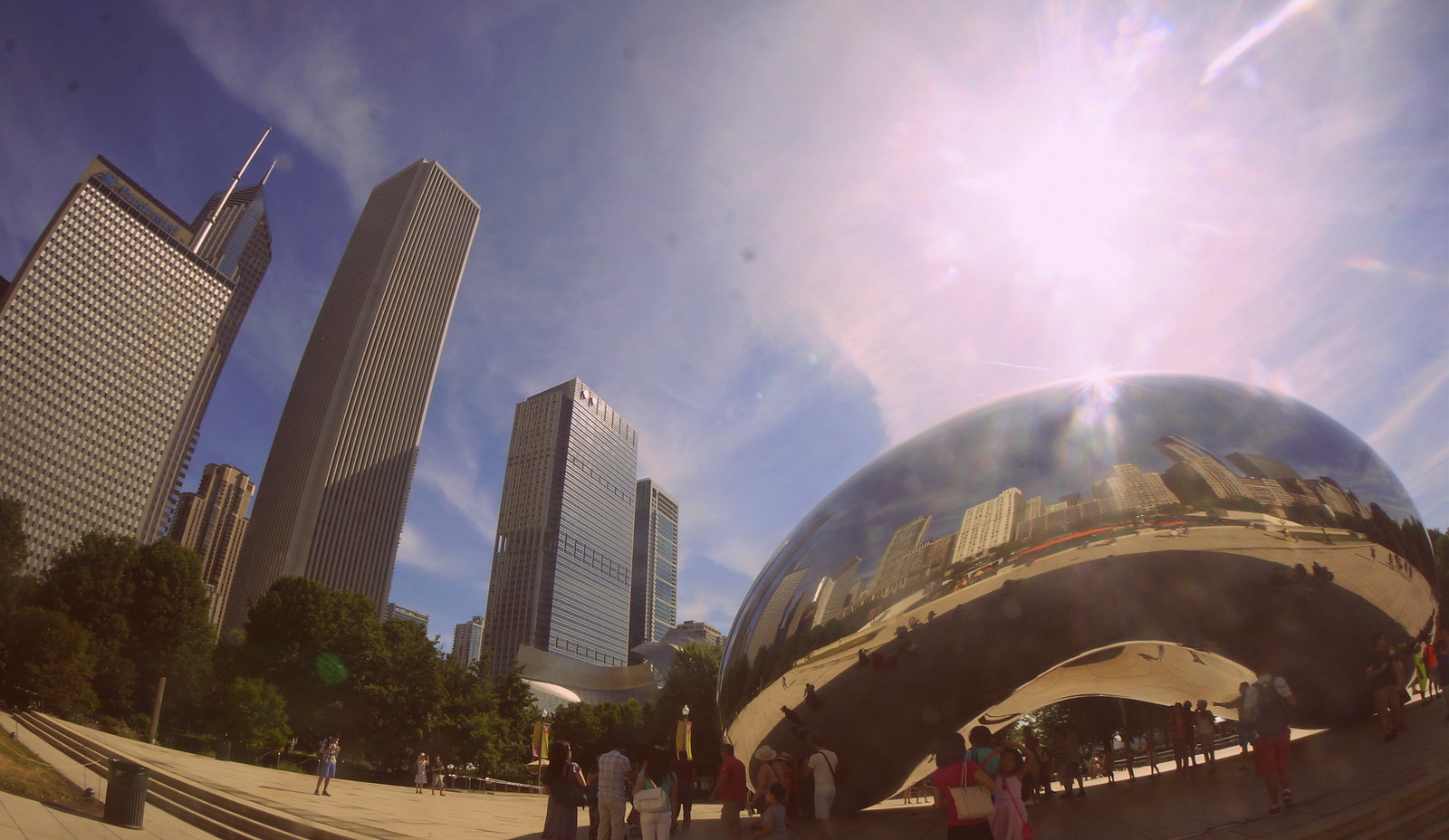 As the train moves away from the city, the skyscrapers of urban Chicago slowly give way to stretches of suburban landscape. The neighborhoods of northside Chicago merge into Milwaukee as the train heads north and crosses state lines. It then moves west towards the first major stop; Minneapolis.

Minneapolis and Saint Paul, sprung up at the confluence of three major rivers and the train station is actually located on a scenic part of the Mississippi River. This station is Union Depot, an early 20th century rail station that was recently restored and revitalized to replace the aging Midway Station as the Amtrak Stop for the Twin Cities. Minneapolis is home to the largest mall and the largest state fair in the United States, and strolling through both while shopping for souvenirs is a highlight of visiting the city. Held for just under two weeks each year, the Minnesota State Fair starts at the end of August and runs into early September. During this time, over two million visitors come to see the many attractions, and sample a broad range of food. This food includes unique Midwestern fare like buffalo steaks and fried cheese curds, to several types of street food served on a stick. While this event is going on, it is worth booking an Amtrak ticket with an extended stop in Minneapolis. Not only because of the State Fair, but also because the city experiences some of its best weather at this time. 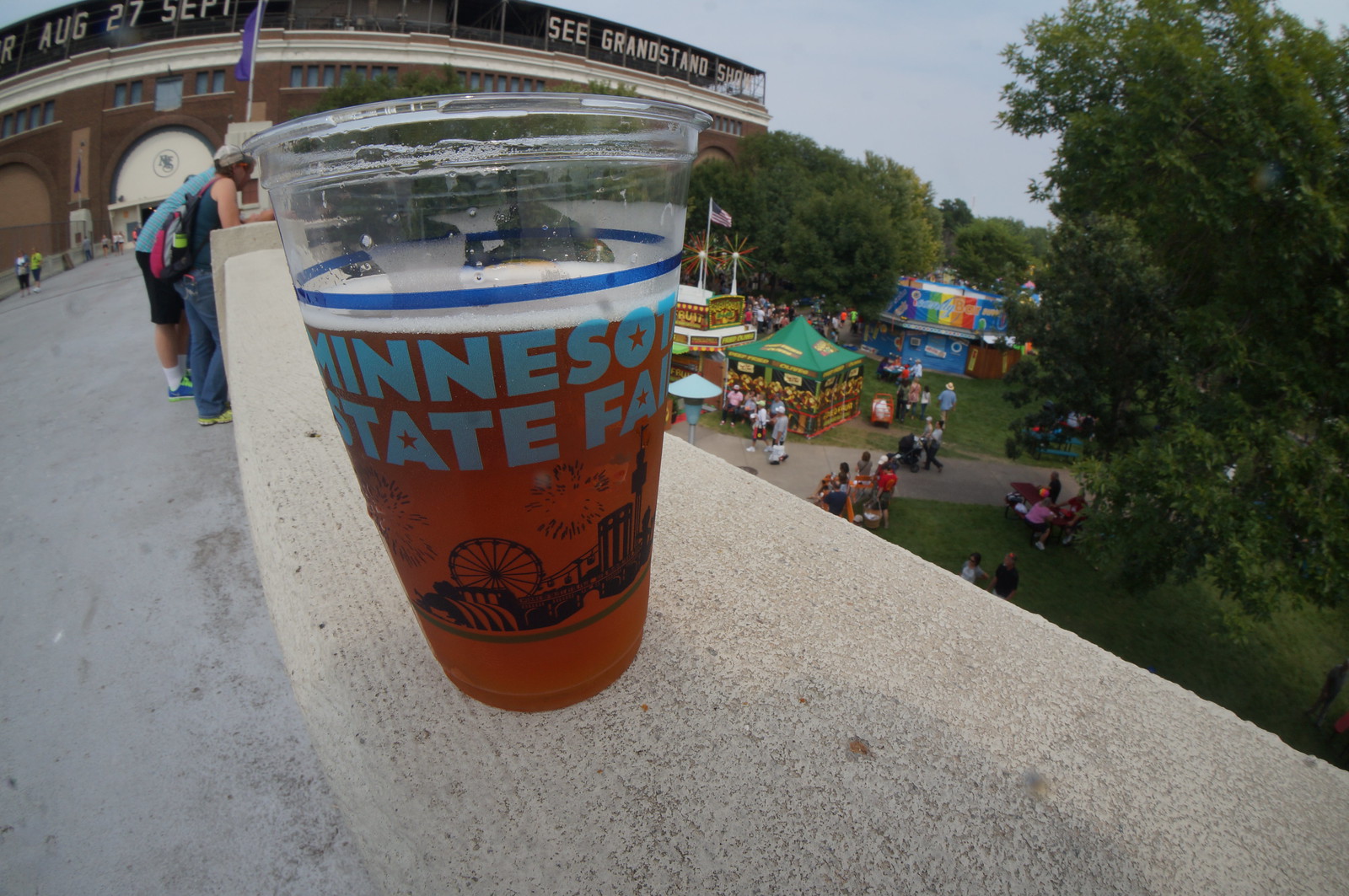 The Empire Builder leaves Minneapolis at night. Using the internet aboard Amtrak trains is often difficult, so there is nothing to do but read a book and get some sleep. In The Beach by Alex Garland, the protagonist is able to easily fall asleep on a train by imagining that he’s in a high tech race car and that he has engaged autopilot mode sleep while in the cockpit.

While I sleep my vehicle continues on auto-pilot, speeding me towards the finish line….. It would be no good fantasizing that the race was in a Formula One car, because how could I go to sleep in that? – Alex Garland, The Beach.

It’s a good way to have something to think about while drifting off to sleep on a train. As I fell asleep the train sped past the twinkling lights of small town America, the sight that I woke up to the next morning was completely different;; flocks of birds flying over sprawling meadows. We had crossed another state line last night, and were now cruising through North Dakota.

Passengers on sleeper cars get priority for dining on Amtrak trains since three meals are included with their tickets. Dining is open to coach passengers afterwards, but there is still a long wait before making a reservation and being called to the dining car. Most routes have a café car, which is by far the more affordable and flexible option for eating on an Amtrak train. On the Empire Builder, the café is on the lower level of the sight-seer lounge and in the morning they serve a range of breakfast sandwiches and items like yogurt and oatmeal. I enjoyed a sausage, egg and cheese breakfast sandwich while I feasted my eyes on meadow after meadow flying past me. The huge panoramic windows were perfect for seeing far off into the distance and the communal seating was great for talking to fellow passengers about their journey across America by Amtrak train. Everyone was on the same journey, but everyone had a different story. Some people had been planning their Amtrak trip for months, others bought a last minute ticket. Some were traveling for pleasure, others for work. 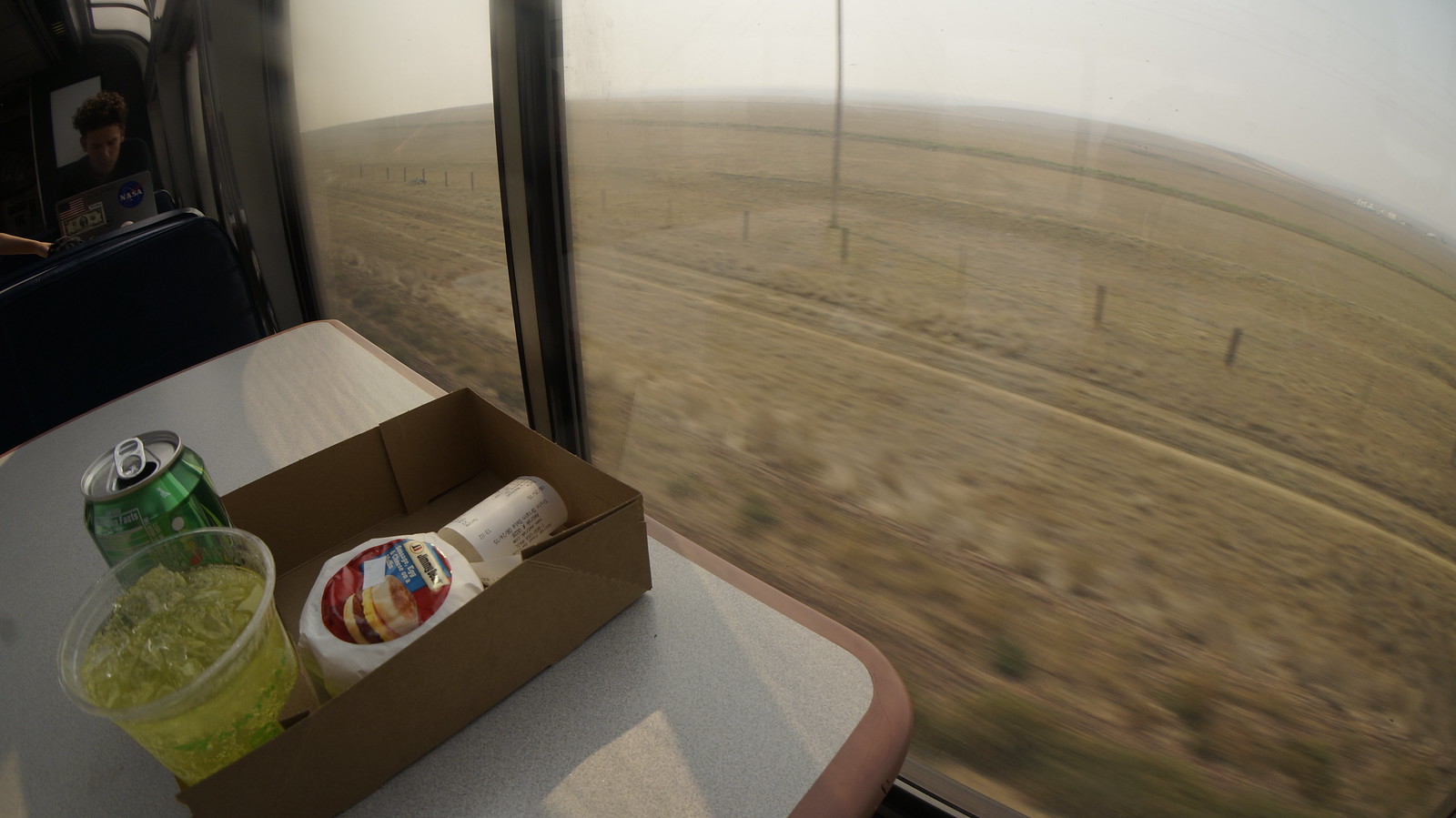 As the train crossed the State line into Montana, the landscape began to slowly change. There was now less open plain and more of the many mountains that the state is named after. From the train, the Bears Paw Mountains and the Little Rocky Mountains were visible along with countless other mountain ranges. Thanks to Trails and Rails, a collaboration between the National Park Service and Amtrak, guides on the train point out iconic landmarks and cultural heritage sights that might otherwise be ignored by the average Amtrak passenger. 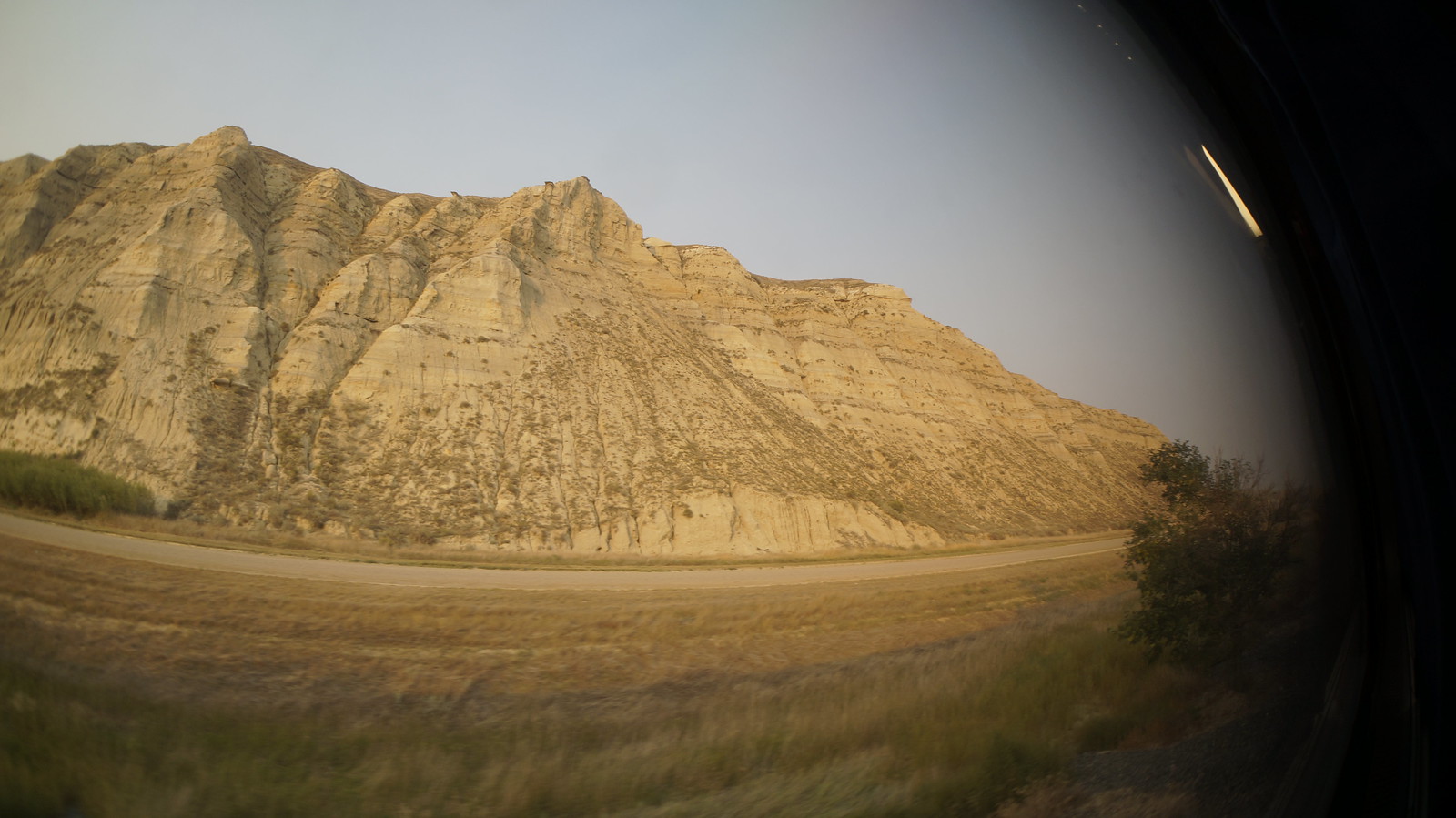 For example, while on a bridge stretching over what seems to be a simple stream, the guide explains that the train was now crossing the Milk River. It was given this name by Meriwether Lewis, a captain on the Louis and Clark expedition who thought that the water resembled tea with a tablespoon of milk added. 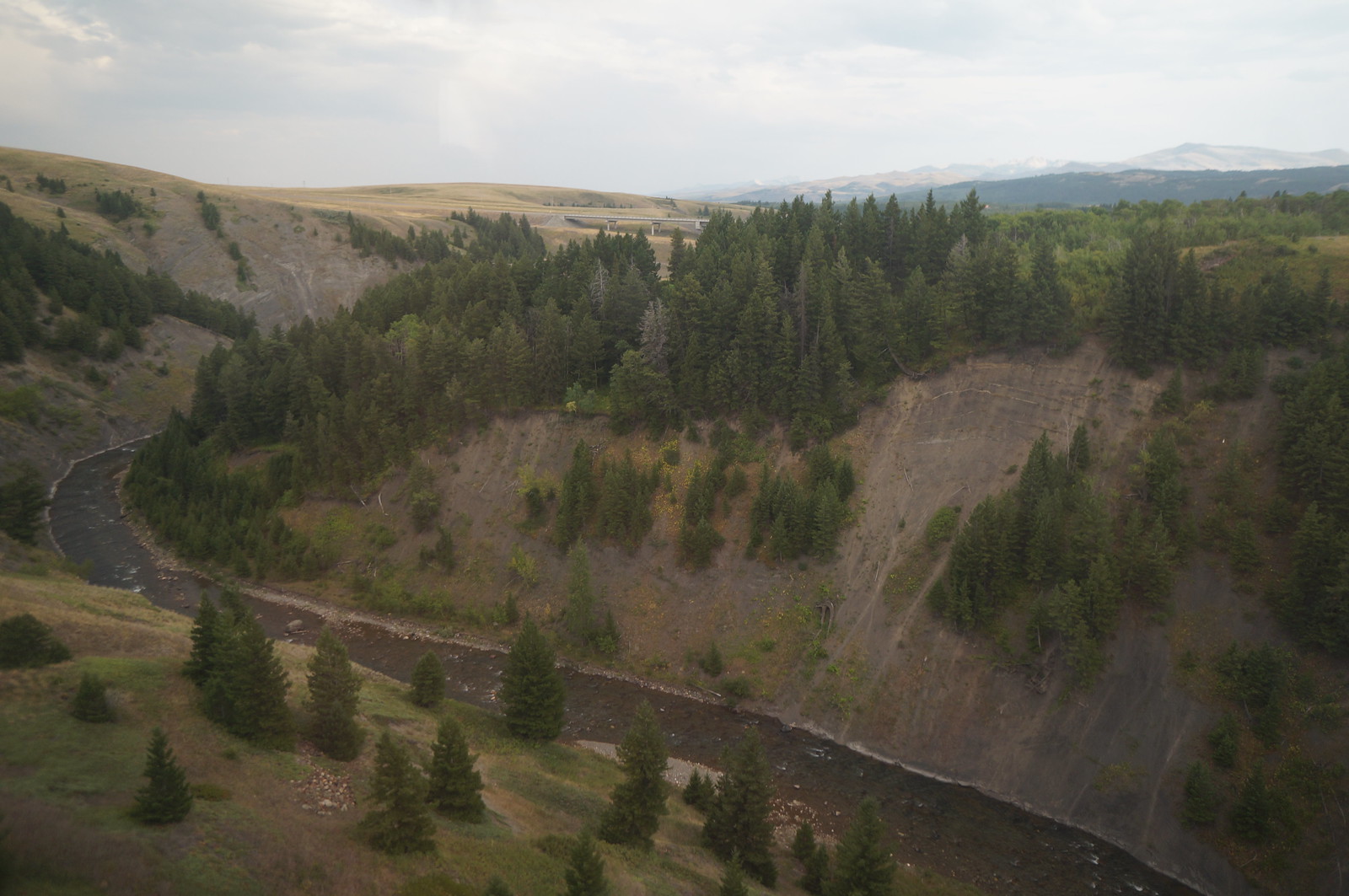 At the Havre service stop, the guide encouraged passengers to disembark and examine a well-preserved S-2 steam locomotive that once ran this same route for the Northern Railroad Company decades ago. There were once fourteen of these locomotives working both the Empire Builder and an earlier train that ran this route called the Oriental Limited. 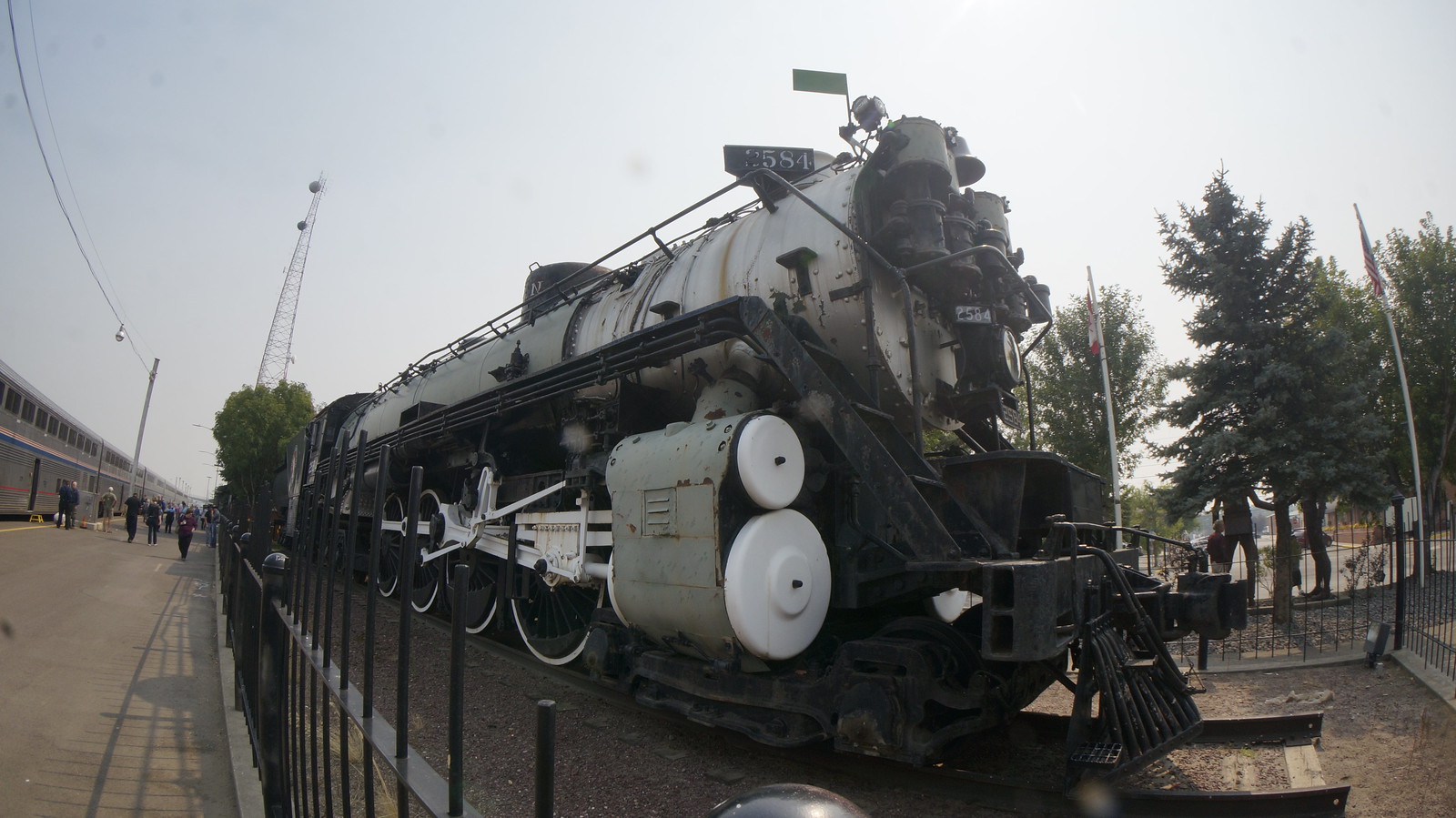 The train spends all of the afternoon traveling through Montana. Since this is a popular time for passengers seeking lunch or an early dinner, getting a reservation in the dining car is even more difficult than it was at breakfast. The demand for the dining car means that enjoying a leisurely meal while gazing at the beautiful landscape is out of the question. Once again, food from the cafe car seems like the best option. For lunch, Amtrak offers a range of sandwiches; Angus cheeseburgers, turkey and swiss subs, and more. There are also some items that are not listed on the main cafe car menu because they are offered on a custom basis in limited quantities. A fellow-passenger alerted me to that option, and I had a meal that included fruit salad, two pieces of southern fried chicken, a buttered roll, and a raspberry cobbler. There is also a craft beer menu that varies with the season and region.

Considering how bland airplane food is, and how expensive airport food is; The options for eating on Amtrak is definitely among the reasons to choose train travel over plane travel in North America. One of he most popular attractions in Montana is Glacier National Park, a World Heritage Site often listed among the most beautiful National Parks in the United States. The Empire Builder stops at two stations within this National Park, West Glacier and East Glacier. The former has more accommodations and conveniences, but the latter is considered more rustic with access to better hiking trails. Ideally, several days are required to properly experience and enjoy such a picturesque destination, but it is possible to see much on a single day by driving a scenic route called the Going-to-the-Sun Road. 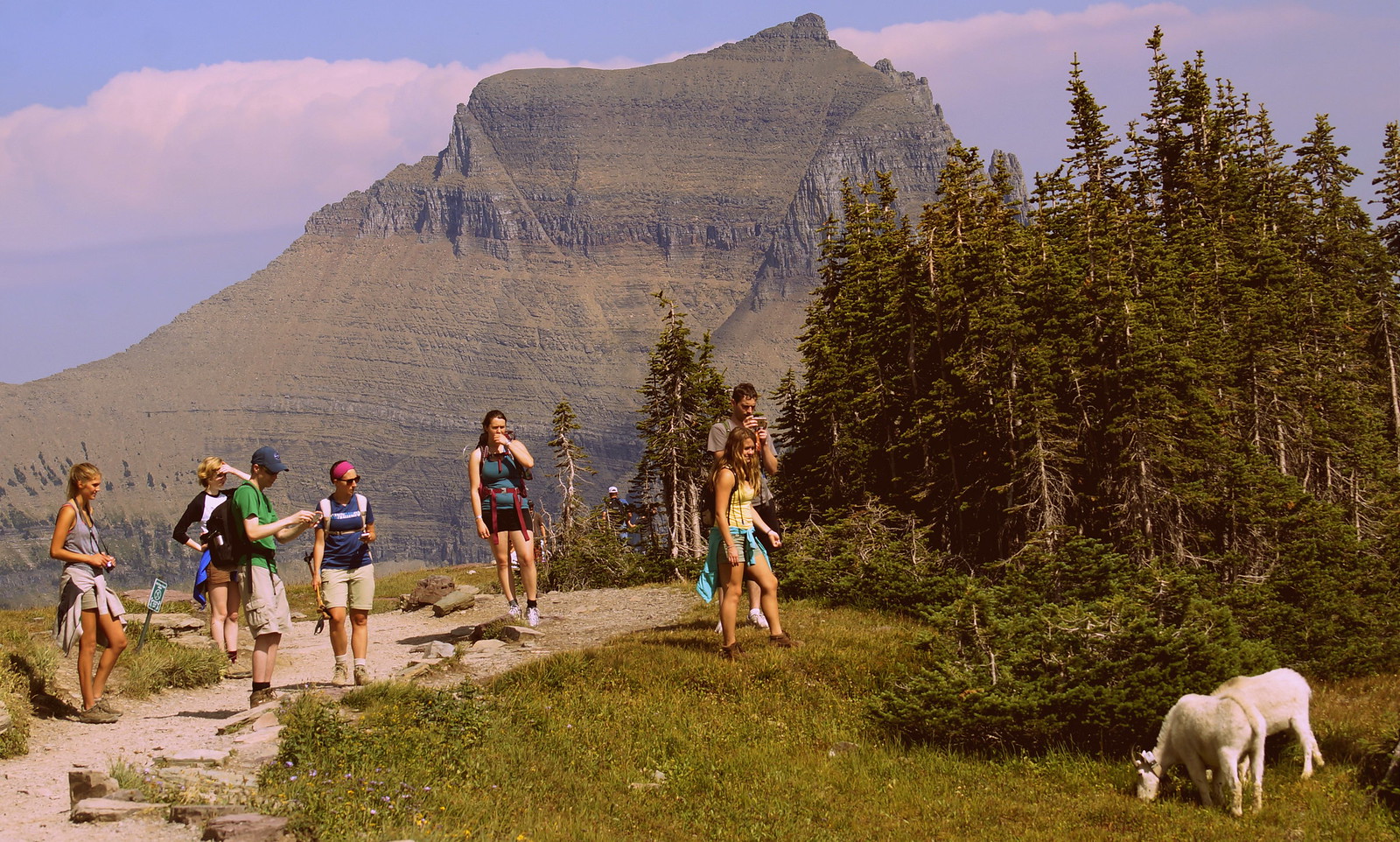 Another popular Amtrak stop in Montana is Whitefish, a resort town just south of Whitefish Lake, and a few miles south of this town is Flathead Lake, the largest freshwater lake in the contiguous United States west of the Mississippi River. The area is popular for water sports, fishing, and hiking. 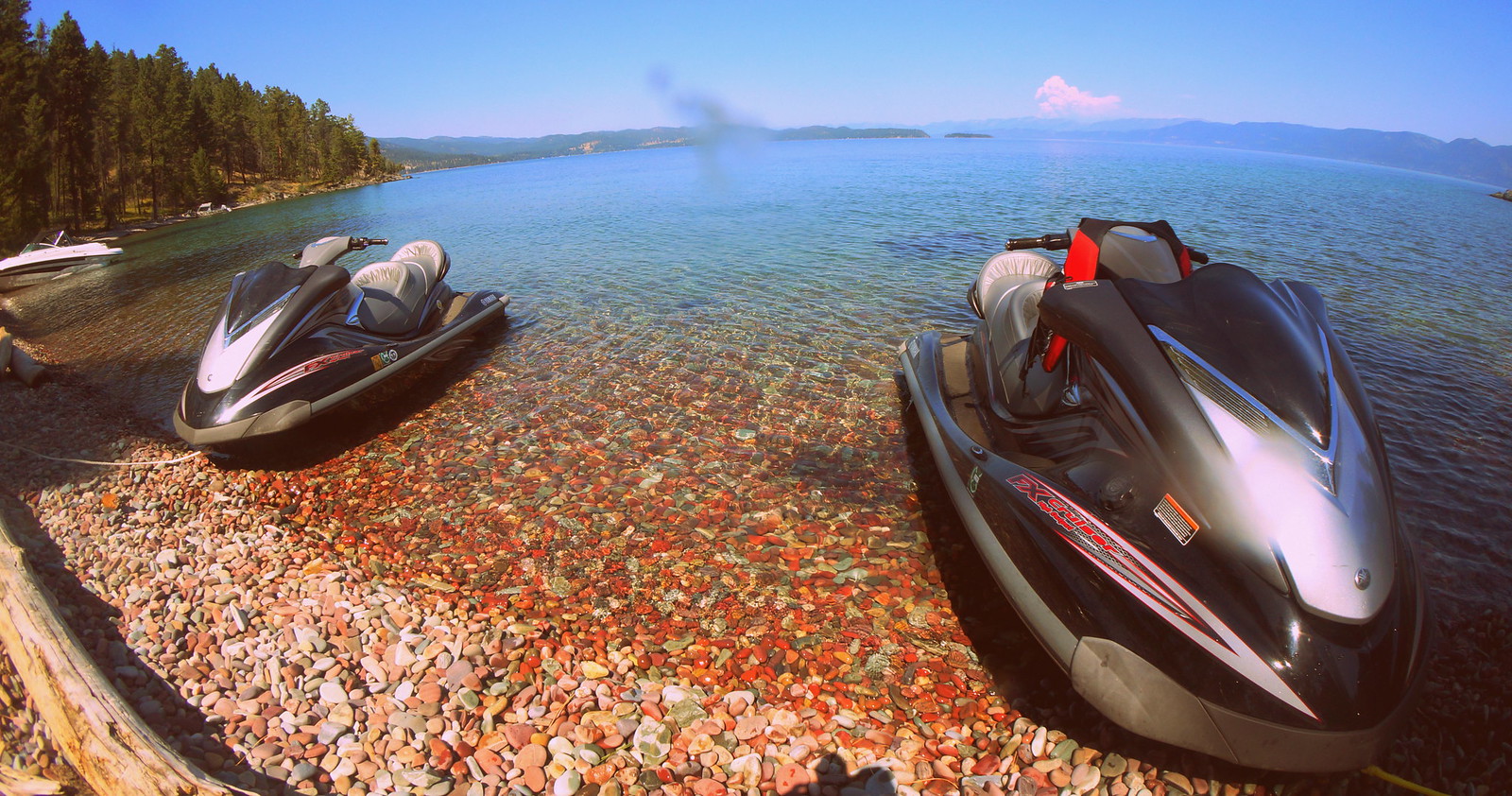 From Montana, the train travels into Washington where some of the cars are detached, and diverted towards Portland, Oregon. The journey through Washington State into Seattle happens over the course of the second night, so there is not much to see. The train passes through Wenatchee, the Apple Capital of the World where more than fifteen percent of America’s apples are grown, and Leavenworth, a Bavarian themed village that’s home to one of the biggest Oktoberfest festivals outside of Germany. As the journey continues over the Cascade Range, the train rises one hundred meters for every mile traveled, before then passing through the mountain range via the longest tunnel in North America; the Cascade Tunnel. 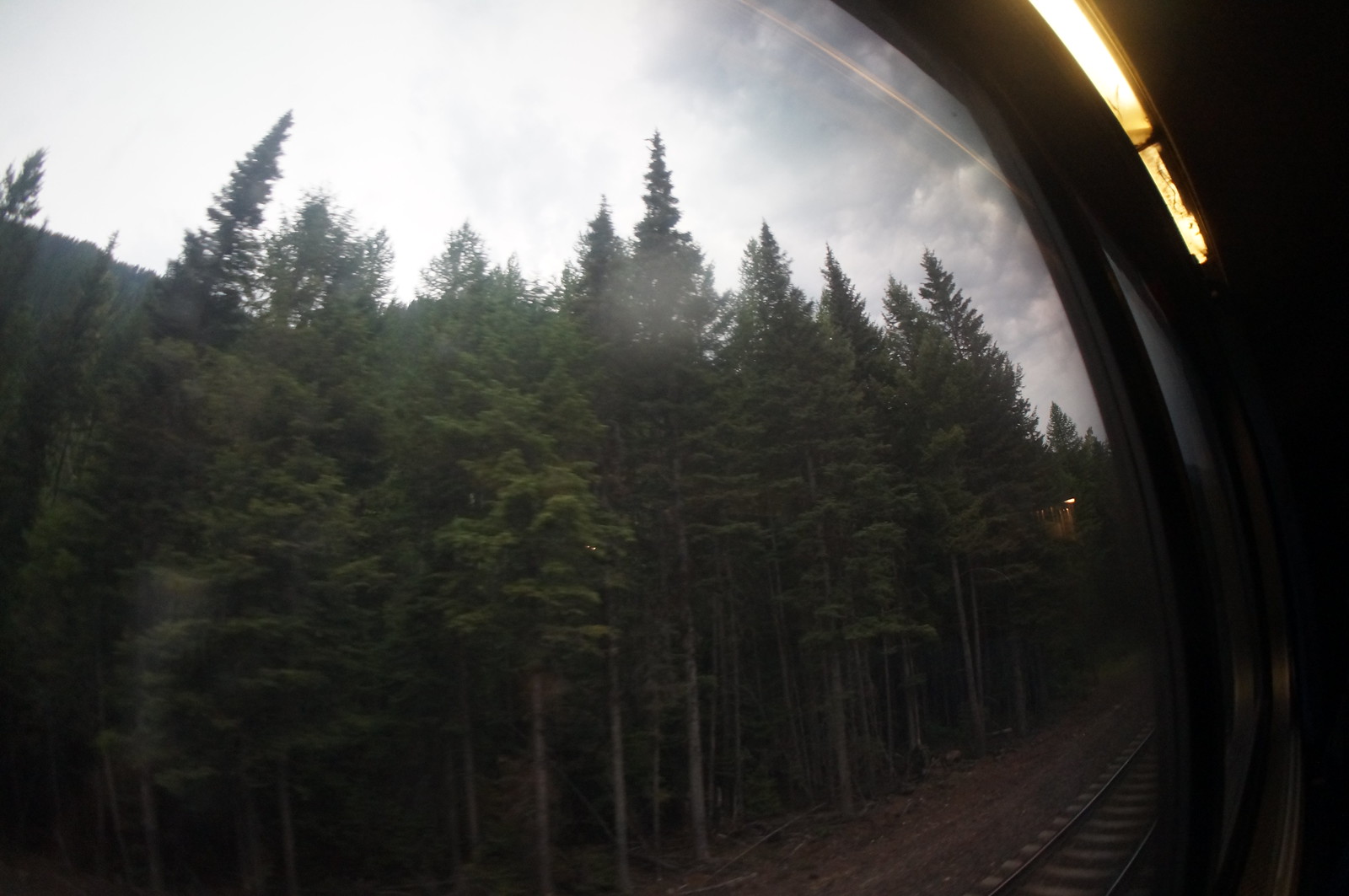 On the other side of the tunnel, the sea comes into view. Noticeable at night because of the pale moonlight glinting off the surface.  The Empire Builder skirts the Puget Sound for almost thirty miles, whizzing past ports and warehouses that have been contributing to the growth of industry in Seattle long before the Great Northern Railway was even built. 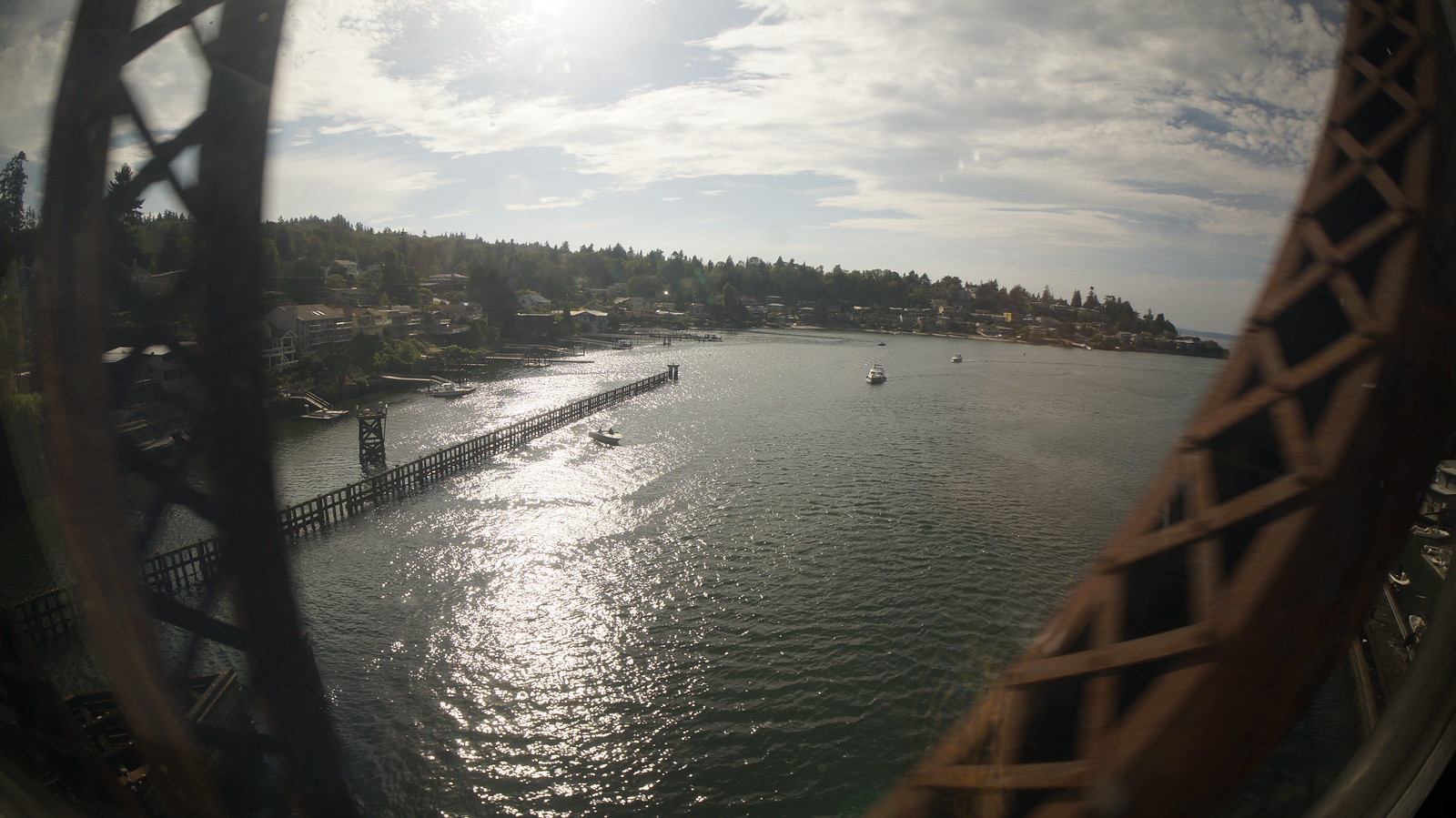 Eventually, the Space Needle comes into view signifying that this journey that lasted almost forty-eight hours is now at an end. This Seattle landmark is located near the King Street Station; the final destination for the Empire Builder. Also close to his attraction is the Original Starbucks at Pike Place, and the first Starbucks Reserve location. The Empire Builder usually arrives in the morning, so either location is ideal for getting coffee before exploring downtown Seattle. 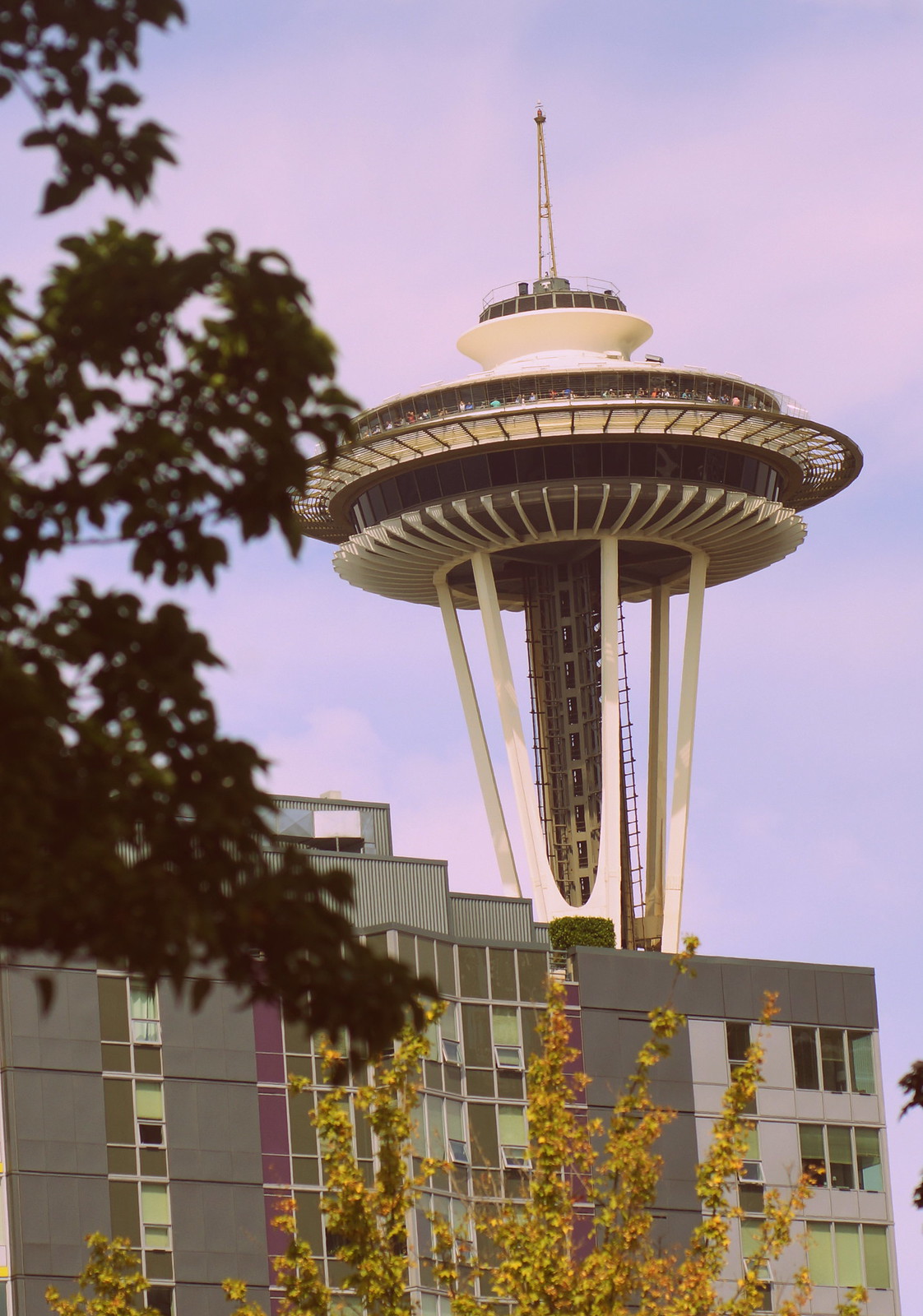 Traveling across America by Amtrak Train is something that should be experienced at least once. It is a unique way to travel, and it offers opportunities to see more facets of America.

A Coast to Coast Craft Beer Connection in Wynwood, Miami